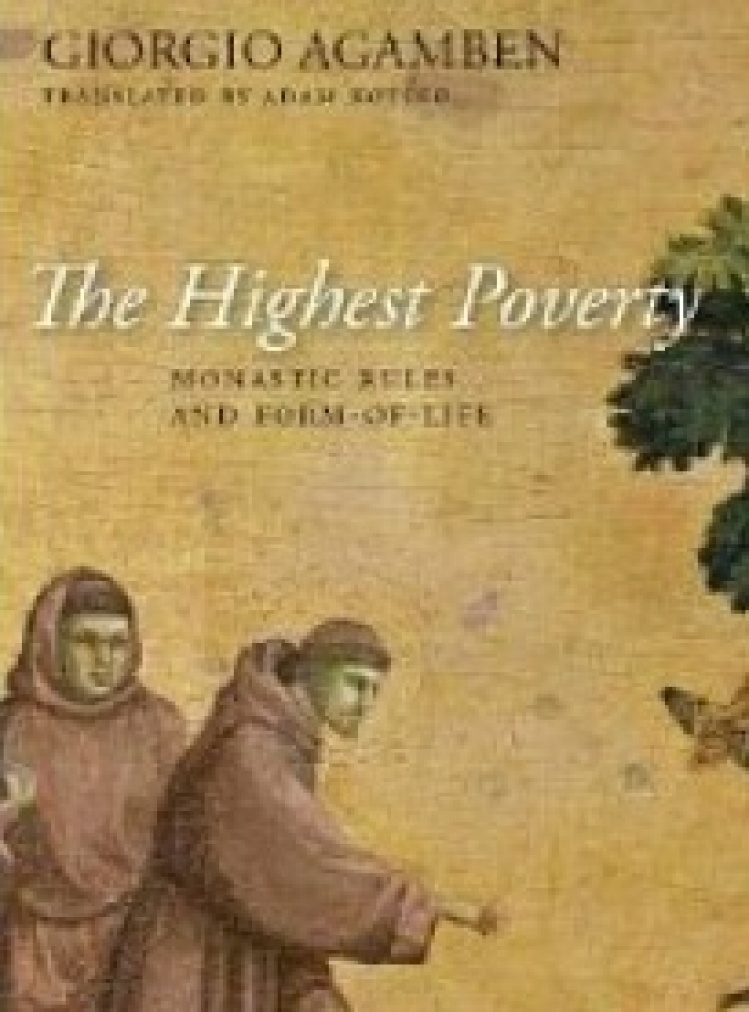 What does it mean to separate oneself entirely from the law’s precepts by embracing radical poverty as a form of life? That’s the central question of The Highest Poverty. The Italian political philosopher Giorgio Agamben arrives at an answer by way of a detailed analysis of texts describing the early Franciscan impulse to establish just such a form of life.

Agamben begins by examining the grammar of ordinary legal thinking about ownership in order to show what the early Franciscans were rejecting, and why it is so difficult for us to see just how radical their proposal was. The first thing to see, he argues, is that the law’s precepts apply not to actual persons but to juridical ones. Juridical persons are abstractions—legal fictions that can bear rights, enter into contracts, own property, and be subject to the prescriptions, proscriptions, punishments, endorsements, and supports of legal codes. Such persons are not identical with actual persons. That’s evident from the fact that we all think—and all legal codes agree—that some aspects of our lives are extra-legal, subject to no law. We may call these aspects of our lives “private,” but whatever we call them, we fully expect that they lie beyond the law’s scope. To consider ourselves as juridical persons is therefore to consider only a part of what we are. All this is true if we understand “law” to mean “positive law”—codes brought into being by legislative bodies. According to Agamben, the juridical person is brought into being and maintained by statute. The actual person—you and me in our particularity—are by contrast biographical, constituted by the lives we lead and the history we have.

Against this understanding of the relation of law to life, Agamben gives us that of monasticism generally, and of Franciscanism as its most consistent and radical form. Francis’s aspiration, as Agamben depicts it, was to bring into being a community, a form of common life (koinos bios in Greek, coenobium in Latin, cenoby in English), in which there would be no distinction between the rule governing the community’s life and that life as it was lived. Rule (regula) and form-of-life (forma vitae) cannot, according to the Franciscan ideal, be distinguished.

Agamben wants to help us imagine a form of life that cannot be subject to legal rule, because the form of life and the rule have become coextensive. There is nothing left outside such a form of life, no part of a person that is external to it, and so those who adopt it are not subject to laws (regulae, leges) because they are no longer juridical persons and it is only such persons who can be understood as subject to law’s rule. Juridical persons have been replaced by monastic persons whose form of life is the vita Christi, Christ’s own life. They have, in the ideal case, become assimilated to Jesus in all that they do, imaging his life in theirs as Francis imaged Christ’s wounds in his own flesh.

The difference between a legal-juridical understanding of monastic life and an understanding of it as a form of life in Agamben’s sense can be a bit hard to keep in mind. Don’t Franciscans have more-or-less legal rules that order their life together? Aren’t they subject to these rules just as juridical persons are subject to the law? Aren’t there punishments for breaking them? And isn’t all that sort of thing simply a necessary condition of all social life, cenobitic or not? Well, yes and no. It’s the great strength of this book to show, by careful analysis of the arguments surrounding central features of the Franciscan life, what the difference between the two ways of thinking comes to.

Consider the vow, the means of entry into the monastic community. One way, the ordinary legal way, to understand this is in terms of contract. On this view, when aspirants take the vow they sign on to a set of precepts (poverty, chastity, obedience), and are subject to sanction if they violate these sanctions. The monks are, de facto, juridical persons, whose relations to their fellow monks and their monastic superiors are understood in broadly contractual terms.

On another understanding, the one Agamben advocates as the proper way to think about Franciscanism, the friar’s vow is a unilateral declaration of intent to enter a form of life (“I want to serve God in this way...”) to be accepted (or not) by the community. The precepts (poverty and so on) are a description of the form of life in question. There is no juridical subject on this understanding, and no contract; instead, there is entry into a mode of living (forma vivendi) with a particular configuration. This mode of life involves every part of the person who enters into it; it cannot be limited to its precepts, and to observe its precepts perfectly is not enough to keep it perfectly—any more than just observing the precepts that define the form of life called marriage is enough to be a good spouse.

Offenses against the precepts are understood very differently according to this second view of vows. Suppose you’re a Franciscan and you offend against one of the precepts governing how you should dress, what your habit (habitus) should be. On the contractual-legal-juridical understanding of precept, when you do this you’ve broken a law and are subject to punishment. But if the precepts are understood descriptively, then when you fail to dress properly you depart from both the habit and the habitus of your form of life. You alienate yourself. There is, according to this view, no distinction between what the monk does—his form of life as lived—and the monk himself. Agamben makes the difference abundantly clear by contrasting what he takes to be the Franciscan view of the religious life with the classic distinction between person and office in the case of a priest. There, office and life are deeply distinct: a priest is no less a priest for being a man who lives badly. He can still administer the sacraments, which is the important thing as far as his office goes. Hence the principle ex opere operato. But in the nonjuridical understanding of the monastic form of life, a monk or friar is less of a monk or friar precisely to the extent that he breaks his vows.

RELIGIOUS LIFE AS Agamben sees it—with Franciscan life as its ideal type—tries to leave behind completely the fundamental distinction between law and life that informs all ordinary understandings of the scope and force of law. It does this by subsuming all norms, all laws, into a form of life, and thereby reconstituting them as essential aspects of a life, rather than as extraneous regulations.

What about poverty? This is the distinctive mark of the Franciscan form of life, and almost half of Agamben’s book is devoted to an analysis of the convoluted debates about whether radical renunciation of ownership is possible, and if so how it should be understood, debates that marked the century following Francis’s death in 1226. Agamben is very good on this. He doesn’t write as a historian trying to get at what those who contributed to these debates may have thought they meant. Rather, he writes as an intellectual archaeologist, trying to get at the essential structure of the debates. That structure concerns the possibility of using things (food, clothing, and so on) without owning them. For the mainstream—the anti-Franciscans, we might say, though some of them were actually Franciscan—simple use (usus simplex or usus facti), is an incoherent concept. All use implies ownership (proprietas), and that position eventually became the doctrine of the church on the question. Agamben, in a pregnant passage, understands this decision by John XXII in 1322 as foreshadowing the understanding of the relation between use, consumption, and ownership that defines “the very canon of mass consumption” we have now. Today nearly everyone understands use to be parasitic upon an understanding of ownership. But Agamben argues it didn’t have to be that way.

He thinks that the Franciscan theorists lost the argument with the broader church because they adopted the language of their opponents. They tried, that is, to give an account of poverty in juridical language, reaching for conceptual devices that would permit them to find a corner of life free from the reach of law. What they should have done instead, Agamben thinks, was attempt a definition of use in its own terms, not in terms of its opposition to ownership. If they had done so they might have succeeded in showing the intimate connection between radical poverty and a life lived without the law.

Agamben’s book is an intellectual delight. It’s analytically sharp and profoundly illuminating in its treatment of the rules of religious communities, materials too often left to canonists who are so close to the material that they cannot think about its meaning. As in some of his other work, he reveals the power of materials from the Christian archive in ways that can be surprising to theologians and canonists for whom these materials are in some sense authoritative. What Agamben offers the church is a good example of the gifts those outside the church can bring to it: he did this for Paul’s Letter to the Romans in his Il tempo che resta (2000), for some central eschatological ideas in his Il regno e la gloria (2007) and La chiesa e il regno (2010), and here in this book for the idea of radical poverty. Catholics should be grateful, and we should certainly read him.