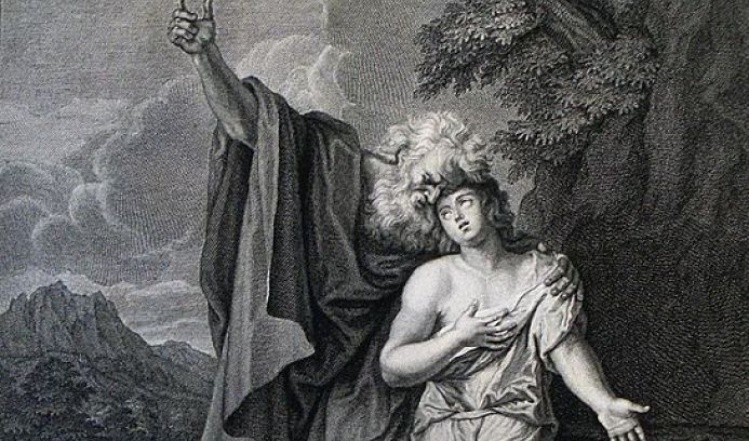 In Genesis 22 it is Abraham, as much as Isaac, who finds himself in a bind. Commanded by God to kill his son, Abraham can devote himself either to God or his son, but he cannot do both. In Shakespeare and Abraham, Ken Jackson argues that this “Abrahamic situation” provides a source for Shakespeare’s meditations on the ethical, religious, and political challenges posed in some of the playwright’s early plays.

Abraham, in Jackson’s stark reading, is not a tragic hero forced to choose between two goods, compelled against his will to sacrifice his son in the hope of being rewarded by God. Instead, Abraham points to the possibility of offering a truly generous gift, a gift for which one would hope for nothing in return: he is thus “simultaneously a murderer and a man of God.” Troubling any easy conflations of “love of God and neighbor,” Jackson’s reading of Abraham suggests that a fully generous love for both is an “impossible possibility.” Indeed, much of modern thought has loudly chosen one of the horns of this dilemma and rejected the other: opting for neighbor over God, this world over the next, the nation state over the church, “secularism” over “religion,” or—as those British bus advertisements for atheism used to say—“enjoying life” over “worrying” about God.

In Jackson’s reading, the Abraham story helps generate these distinctions by suggesting “the misanthropy implied in any true faith,” in which responding to the call of the wholly Other (God) entails ignoring the call of the other (other people). Yet the Abraham story also collapses distinctions between the “religious” and the “secular.” Because Abraham must give all and expect nothing in return (God makes no promises and never tells Abraham why he must sacrifice Isaac), “Abraham must act religiously but without a divine presence or even any sense of divine presence.”

Jackson brings this reading of the Abrahamic situation to Shakespeare, arguing that in his plays “Shakespeare sought dramatically, but still religiously...the impossible other, the Abrahamic gift.” Shakespeare’s drama points toward a more profound religion than whatever form of Christianity Shakespeare himself may have believed in or practiced. Yet this religion is, paradoxically, a “secular” one: a religion “constituted primarily by a desire to give oneself absolutely to the ‘other’ that cannot be known, a desire that may determine institutionalized monotheisms [i.e., Christianity, Judaism, Islam] but is not equivalent to any of them, a desire that is inextricably intertwined with a secular or existential worldview.”

Jackson shows us a Shakespeare sallying forth on “Abrahamic explorations” in six of his early plays. His pious but weak Henry VI, for example, is read “in terms of the patriarch [Abraham] whose commitment to a divine ‘Other’ compromised his responsibilities to this world.” Richard II, in turn, shows Shakespeare turning to the Abraham story to think through problems of political theology, such as “divine right and sovereign legitimacy.” A helpful chapter also outlines the various ways the Abraham story has been interpreted in Christianity and Judaism, showing in particular that Paul’s reading of Isaac as Christ is “rabbinical” inasmuch as it follows an earlier Jewish tradition of reading Isaac as “the model for sacrificial atonement or redemption.”

Jackson’s approach yields some startling results. When Aaron the Moor, the villain of Titus Andronicus, refuses the command to kill his son in a play in which multiple child sacrifices have already occurred, this act “should not be seen as compassion at all,” Jackson argues, but rather as an instance of someone refusing to offer the “true Abrahamic gift.” Jackson also argues that the combination of generosity and misanthropy in one of Shakespeare’s most inscrutable and contradictory characters—Timon of Athens—is determined by the Abrahamic situation. Timon’s attractive generosity in the play’s first half is driven by the same impulse as his repulsive misanthropy in the second: a desire for “the pure gift without exchange.”

So although Shakespeare and Abraham is in some sense about Shakespeare and religion, it should be clear that Jackson is not particularly interested in, for example, whether Shakespeare was or wasn’t Catholic. Jackson is hunting larger game in this book, pushing “down through Christianity to the religious passion underlying Christianity: the Abrahamic desire to give absolutely, completely.” More important for Jackson than Shakespeare’s “actual, personal faith” are his plays, which “point…beyond Christianity and outside Western metaphysics. Shakespeare’s profound and devout Christianity” thus resembles what Jacques Derrida called a “religion without religion,” which is produced by “the religious passion underlying religion”: the desire to give completely, without hope of reward or exchange.

This idiosyncratic understanding of “religion” leads Jackson to make some bold claims that will not be immediately welcomed or even recognized by some literary scholars. For one, Jackson argues that the academy’s current interest in the marginalized “other” is itself religious. Again drawing on the thinking of Derrida, Jackson argues that this “critical, seemingly secular and ethical interest in the ‘other’...is inextricably tied to a religious understanding of the ‘Other’ beyond being.” Jackson finds all the interest in the non-Western, non-normative “other” not so much misguided as insufficient. Insofar as scholars perceive themselves in the “other” (considering themselves marginalized, oppositional, non-normative), this interest is still “geared toward the self” of Western metaphysics.

On the other hand, Jackson’s distinctive approach to “religion” leaves out quite a bit: it cannot discern what particular religions do and are, how they work, and what might be at stake in religious particularity. Distinctions between Christianity and Judaism fall out, for example, leading Jackson to read Shylock’s forced conversion in The Merchant of Venice as a mere “procedural gesture having little to do with Shakespeare’s religion or religion writ large.” Jackson is generally dismissive of “the trappings of a particular tradition.” For all Christianity’s insistence on generosity, Jackson believes it is marred by Gospel notions such as “treasure in heaven” and a “Father which seeth in secret” who “shall reward thee openly.” For Jackson, this economic relationship lacks generosity: you might do good deeds, but only because you hope God will pay you back.

Despite its lack of interest in Shakespeare’s actual Christianity, however, Jackson’s work is especially welcome in the hothouse world of literary studies, where religion—when it isn’t reduced to political and economic forces—is all too often treated as just another social context. At its most bracing, Jackson’s approach to religion makes it something to be approached with the utmost seriousness, with a respect for its dangerousness and its capacity to unsettle and exceed comprehension. Built on a faith which is, in Jackson’s words, “painfully aneconomic and unrewarding,” this is the ascetic, break-from-the-world Christianity found in T. S. Eliot’s “Ash Wednesday” and the writings of the desert fathers. This kind of Christianity tends to downplay other aspects of the faith: the Incarnation, the celebration of God’s presence in the world, the building and maintenance of institutions, and the sense of joy, comfort, and rightness with the world encapsulated by Hilaire Belloc: “Wherever the Catholic sun doth shine, / There’s always laughter and good red wine.” Jackson gives us a Shakespeare who refuses these consolations and who, longing for the wholly Other, seeks to give without reserve.