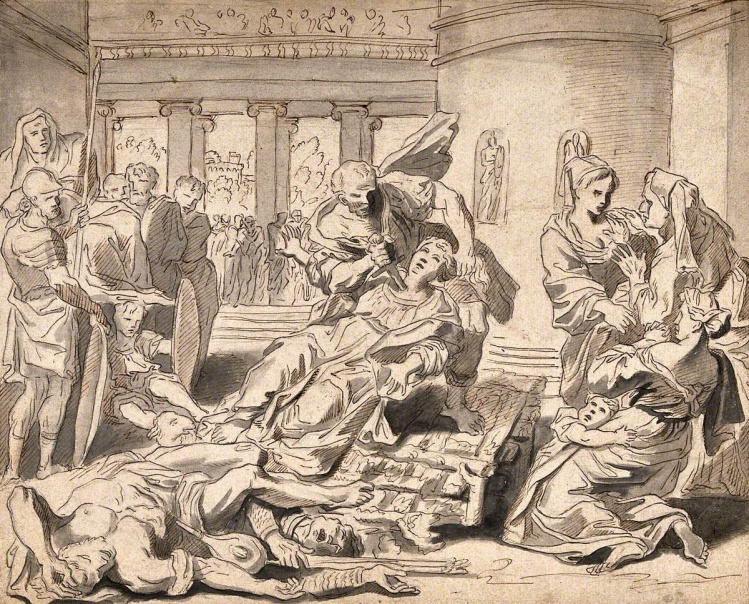 Once, while interviewing for a job, I told an English department’s search committee that I would be interested in teaching a class on chastity in literature. I don’t know if my proposal alone torpedoed my candidacy, but I still remember the uncomfortable silence that followed. The message of that silence was clear: chastity is weird.

This weirdness is precisely what Lisabeth During homes in on in her intelligent, lengthy, and ambitious book The Chastity Plot. Chastity refuses to continue the cycle of generation contests and reconfigures societal imperatives, whatever those might be. “Militant chastity frustrates and allures,” During writes. “[I]t is the making of martyrs, the sign of sovereignty, and the fast track to pathology. That is why it is interesting.”

During opts for the term “chastity” rather than “celibacy” in part because chastity’s meaning is so unstable. Depending on where and when it is used, it can mean temporary or lifelong abstinence from sex, or abstinence from “unlawful” sex, or, in the Catechism’s formulation, the “successful integration of sexuality within the person and thus the inner unity of man in his bodily and spiritual being” (CCC 2337).

During calls her approach “genealogical,” which means that she does not offer a clear definition of chastity but instead tells the story of its many transformations from antiquity to the present. Among these was the shift from a rigorous, prophetic, and sometimes antisocial Christian version of chastity to a more mundane version that reinforced the social order rather than challenging it. Chastity “in the Christian tradition is a virtue of the soul. In the secular tradition it is the honor of the female sex.”

During is happily unencumbered by, and largely unaware of, the intra-Catholic debates that swirl about the concept—e.g. whether Latin-rite priests should be required to remain unmarried, or whether married couples should, under some circumstances, “live as brother and sister.” During offers neither “an apology for chastity nor a lament for its decline.” Instead, she aims to show that “the chastity ideal has profoundly influenced a number of the West’s social and personal aspirations, modifying the ways individuality, subjectivity, and psychological norms have been imagined in the modern world.”

During identifies a “chastity plot,” which comes in major and minor versions: the “eunuch’s plot” and the “maiden’s plot.” Despite their similarities, the two have different aspirations: “While the eunuch stakes almost everything on the chance for otherworldly transformation, the maiden seeks to have her significance recognized in the world.” The distinction can be illustrated by comparing the Golden Legend’s “Life of Saint Agnes” with Jane Eyre. St. Agnes does all she can to avoid marriage. Claiming to be “loved of another lover,” Jesus, she aims at something higher than marriage to a powerful Roman. She would rather die than marry. Like St. Agnes, Jane Eyre fends off a rich man’s proposal of marriage. But Jane’s rejection of marriage, unlike St. Agnes’s, is only provisional. Jane doesn’t want to transcend marriage; she wants a good marriage.

Today, During observes, the maiden’s plot has long “outstripped the eunuch’s plot” and has morphed into “that mainstay of novel and film, the marriage plot.” The fact that you’re much more likely to have read—or at least to know about—Jane Eyre’s life than St. Agnes’s illustrates During’s point.

During has unearthed a range of examples that I found fascinating. (Did you know that the slogan of the early-twentieth-century English suffragist Christabel Pankhurst was “Votes for Women, Chastity for Men”?) While During draws on the work of historians, her main sources tend to be philosophical and literary. After an overview of Nietzsche and Freud’s critiques of ascetic ideals, there are chapters on Euripides’s “masculine hero of chastity” Hippolytus, Puccini’s unfinished opera Turandot, Tracy Lord in The Philadelphia Story, the Danaids in The Suppliants, and England’s “Virgin Queen,” Elizabeth I.

‘The chastity ideal has profoundly influenced a number of the West’s social and personal aspirations.’
sharetweet

But the book revolves around two chapters on early Christianity and the eunuch plot. During is clearly taken by one story in particular: that of Thecla of Iconium. In the apocryphal Acts of Paul and Thecla, St. Paul’s preaching convinces Thecla to refuse to marry her fiancée. She is sentenced to death by burning, but a rainstorm sent by God quenches the flames. After a trip to Antioch, where she narrowly avoids being raped, she retires to a mountain where, in some versions of the story, “some evil-disposed young men went up to ill-treat her: and she prayed, and the rock opened and she entered it, and it closed after her.”

You get the idea: the holy virgin Thecla is consistently threatened by men and consistently protected by God. For During, Thecla’s chastity contravenes many contemporary assumptions about the virtue: her chastity is anything but retiring, fearful, or conformist. Thecla is a “defiant virgin…one of chastity’s irrepressible warriors.”

The Chastity Plot also tours chastity’s contemporary scene, including “Girls Gone Mild,” people who have “kissed dating goodbye,” abstinence-only sex ed, and a range of American (largely Protestant) approaches to chastity in the past few decades. We learn about The CW show Jane the Virgin (2014–19), whose title character makes a “vow to keep her virginity” and practices a “warm, if intermittent, Catholicism.” Similarly, Fleabag’s (2016–19) “hot priest” also appears as an instance of “a celibate character who is neither corrupt nor corrupting, neither sanctimonious nor hypocritical.”

Despite During’s claim not to lament chastity’s decline, she nevertheless argues that something important was lost when married people were brought into chastity’s orbit around the time of the Reformation. For both Catholics and Protestants, chastity lost some of the “apocalyptic energies” that had motivated early Christians. During contrasts the virgin described by Paul in 1 Corinthians 13, for whom “the time is running out,” with the “bourgeois Miss” of the nineteenth-century novel or, more recently, of chastity clubs. Both have resolved not to have sex, but their concerns are quite different.

[T]he virgin whom Paul is thinking about does not spend her time worrying about her personality or reflecting on the special beauty of her sexual innocence. She is in a hurry for the end of time to arrive. This is not what the bourgeois Miss is about. Maidenly and delicate, she is keeping herself for marriage. Chastity is praised in both instances. But it is hard to recognize it as the same virtue.

For those who still consider “chastity” to be any kind of virtue, it is a virtue for everyone, not just the celibate. And this is where Catholicism comes into view.

The Catholic Church is the only major institution in the West that maintains a publicly recognized position for the unmarried. In other words, Catholic institutions still give witness to the intuition that chastity is not a withdrawal from life but the sign of a fuller life. The Catechism, which During quotes on the second-to-last page, calls this “the Kingdom”: “Both the sacrament of Matrimony and virginity for the Kingdom of God come from the Lord himself…. Esteem of virginity for the sake of the kingdom and the Christian understanding of marriage are inseparable, and they reinforce each other” (CCC 1620).

During cheekily but correctly describes this formulation as trying “to swing both ways,” holding together “the major plot of the eunuch’s renunciation and the minor plot, which praises the maiden’s modesty and advocates continence within marriage.” Her tone is surprisingly approving. She seems glad that there is an institution still willing to speak a good word not just for chastity but for virginity, with all its eccentric, even defiant, implications.

The Chastity Plot
Lisabeth During
University of Chicago Press
$45 | 392 pp.