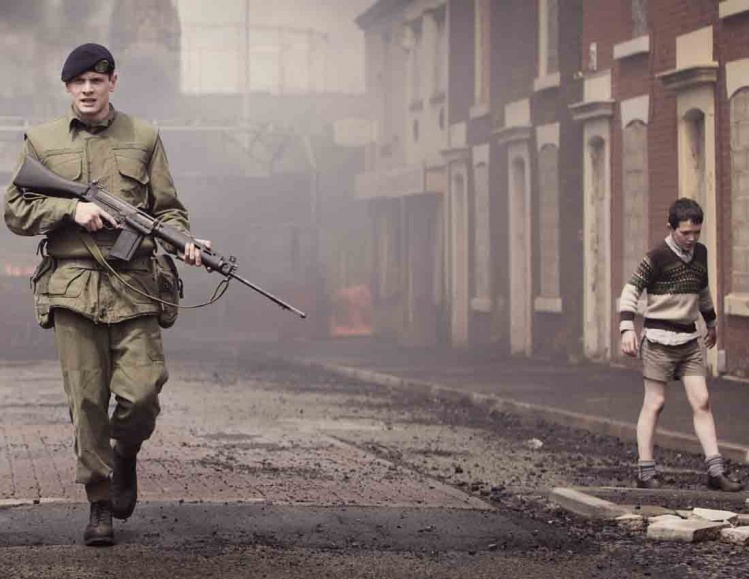 Does any cinematic product deliver as much bang for the buck as the indie horror film? The Blair Witch Project (1999) was shot on a budget of $30,000, while last year’s critically acclaimed The Babadook cost just $2 million. (In comparison, the current installment of the Fast and Furious series, Furious 7, rings in at $250 million.) Horror’s go-to themes of enclosure and entrapment easily translate to small casts and simple sets; the shrewdest horror filmmakers, moreover, understand that our fear is all about anticipation—and keeping something off-screen, making something perpetually not yet happen, is about as thrifty a trick as you can pull. A curious cinematic pleasure resides in monitoring horror’s brisk efficiency. How much can you get for so little?

It Follows, by writer-director David Robert Mitchell, begins with an ominous sequence in which a scantily clad teenage girl flees a suburban house in obvious psychological distress, quaking in fear at some unseen pursuer. Escaping in a family car, she drives off into the night, arriving eventually at a beach, where she makes an anguished cellphone call to her parents, apologizing for all her shortcomings. The next shot shows her horrifically broken body on the beach at dawn.

This nightmarish prologue cues up a strange story charting the spread of a deadly erotic contamination, or perhaps curse. Shortly after Mitchell’s main character, a dreamy-looking teenaged girl named Jay (Maika Monroe), sleeps for the first time with her new boyfriend, he discloses that he has infected her with a fearful plague: from now on she will be stalked by zombie-like demons who will attempt to kill her in gruesome fashion. Invisible to others, to her they will appear to be normal humans; any passerby approaching with a blank expression is likely to be the one. Only by giving the curse to another sexual partner can Jay protect herself, since evidently the ghouls focus on the most recent recipient. Thus are we dropped into a film that is part Halloween, part Looking for Mr. Goodbar, and part The Walking Dead.

Nominally, It Follows hews to the hoary trope of teen sexual promiscuity punished by violent terror, but the script’s resonances are more varied and strange than that, touching on subtexts sexual, ethical, epidemiological, and sociological. The contagion theme links disease with demons and sex with death, resurrecting AIDS hysteria and reminding us that we are most mortal and vulnerable in our sexuality, our procreative power mirrored in its negation. The nightmare plays out in the suburbs of Detroit, and the attempt by Jay and her friends to turn tables on her predator and hunt it down takes them into that city’s notorious zones of abandonment, whose ruined homes and encroaching weeds heighten the sense of decay. Mitchell’s last film, The Myth of the American Sleepover (2010), was a tender coming-of-age story in the manner of the early Richard Linklater, plunking us down with four teenagers as they rollick across suburban Detroit on the last weekend of summer. It Follows turns that film inside out, plunging its sunshine into shadows and creating what critics have called a new subgenre: “slacker horror.”

There is some slackness in the film itself: anachronisms in sets and settings (1970s, yet with cell phones and Kindles); a clumsy midstream change in the efficacy of the demons (suddenly they can harm everyone, not merely their targets); over-reliance on a pulsating electronic soundtrack; and a silly, over-the-top denouement. In the end it’s not clear that Mitchell knows what he’s doing with all of the ideas implicit in his film—or that it matters. It Follows is finally about what all good horror movies are about: namely, what they do to you, demolishing your sense of well-being and enwrapping you in a pervasive dread.

THE SETUP OF Yann Demange’s new film couldn’t be more traditional: a soldier lost behind enemy lines must make his way back to safety. The war depicted in ’71 is no traditional war, however, but Northern Ireland at the height of The Troubles, and the battlefields British private Gary Hook must negotiate are the dark lanes and alleys of Belfast, teeming with violent hatred. Two years after the riots of August 1969 and the deployment of British troops, offensive actions by the IRA have turned the conflict into guerilla war and the city into a stark landscape of blasted rubble and burning cars.

Demange’s theme is the horror of war and the radical unpreparedness of the young men thrown into it. The film’s opening follows a company of young British army recruits through training routines in remote Scotland, jogging in formation up hillsides, crawling through streams; the scenes convey the rigor of military training, the vigor of the young men who undergo it, and the jaunty camaraderie it creates. It all makes enlisting seem like a pleasant country lark.

Until it isn’t. To their dismay, the company learns it is being sent not to Germany, as hoped, but to Northern Ireland; and before they know it, they’re standing on a street in Belfast, facing a hostile, screaming, rock-throwing mob. As the mob presses in and the soldiers’ jaunty bearing gives way to panic, a boy steals a weapon and runs off. Pvt. Hook and another soldier give chase. A sudden, brutal act of violence ensues, in which the other soldier is killed and Hook savagely beaten and taken captive. Following the opening scenes in the bucolic countryside, these events rush forward with a suddenness expertly calibrated to shock. It feels like being cast from a serene afternoon into a maelstrom.

And the pressure never lets up; Demange keeps the pedal of his movie pressed to the floor. Wounded, Hook manages to escape his tormentors. But how to make it back to safety? He doesn’t know the terrain of the city, nor is he aware that he is being pursued by a matrix of forces: his own company, desperate to find him; two factions of Irish Republicans—old IRA and Provos—who are themselves involved in lethal internecine struggles; the local Ulster police, battle-hardened and cynical; and a cadre of undercover counterinsurgency forces, some notably ruthless, who have their own shadowy agendas. That Hook is being hunted by men who themselves are hunting each other boosts the film’s relentless tension. Lethality—and treachery—pour forth from every corner.

’71’s obvious forebear is Carol Reed’s 1947 classic, Odd Man Out, another tale of a wounded man eluding enemies in Belfast. But unlike James Mason’s Johnny McQueen, Gary Hook is not a struggling moral agent; the film says nothing about his political allegiances (if any), moral intuitions, or inner battles. Hook’s youthful ignorance and innocence make him a kind of moral tabula rasa, upon which the violent, the treacherous, and the corrupt will write in blood. “You’re just a piece of meat to them,” says a kindly civilian—himself a former army medic—who briefly takes Hook into his flat and tends to his wounds.

To bring home this appalling truth, Demange and his screenwriter, playwright Gregory Burke, have made Hook laconic in the extreme. Casting the classically handsome Jack O’Connell, they give him almost nothing to say; this must be the most severely underwritten lead role since Clint Eastwood’s Man with No Name. We get no insight into Hook’s background, aside from a brief early segment in which he visits his younger brother in the orphanage where he himself apparently grew up. This refusal to flesh out the character reinforces the point that it isn’t Hook in his individuality that matters, but rather in his generic role and function as soldier—a callow and ill-trained one. Hook’s reticence serves his predicament: for nearly all of the film’s ninety-nine minutes, he is either hiding out in places where survival depends on silence, or too wounded to do more than groan.

Viewers of ’71 unfamiliar with the politics of Northern Ireland may find themselves lost among the intricacies of who is fighting whom, temporarily allying with whom, and betraying whom. Again, the omission of context reflects Demange’s commitment to keep his story stripped to its harsh essentials. There is hardly a scene or action that doesn’t relate directly to the matter directly at hand, the white-knuckled calculus of survival. Demange works with the efficiency of a horror-film director; and his nightmare of sectarian hatred and urban violence is all the more frightening—alas—for having actually happened.

Published in the May 1, 2015 issue:
View Contents
Tags
Movies