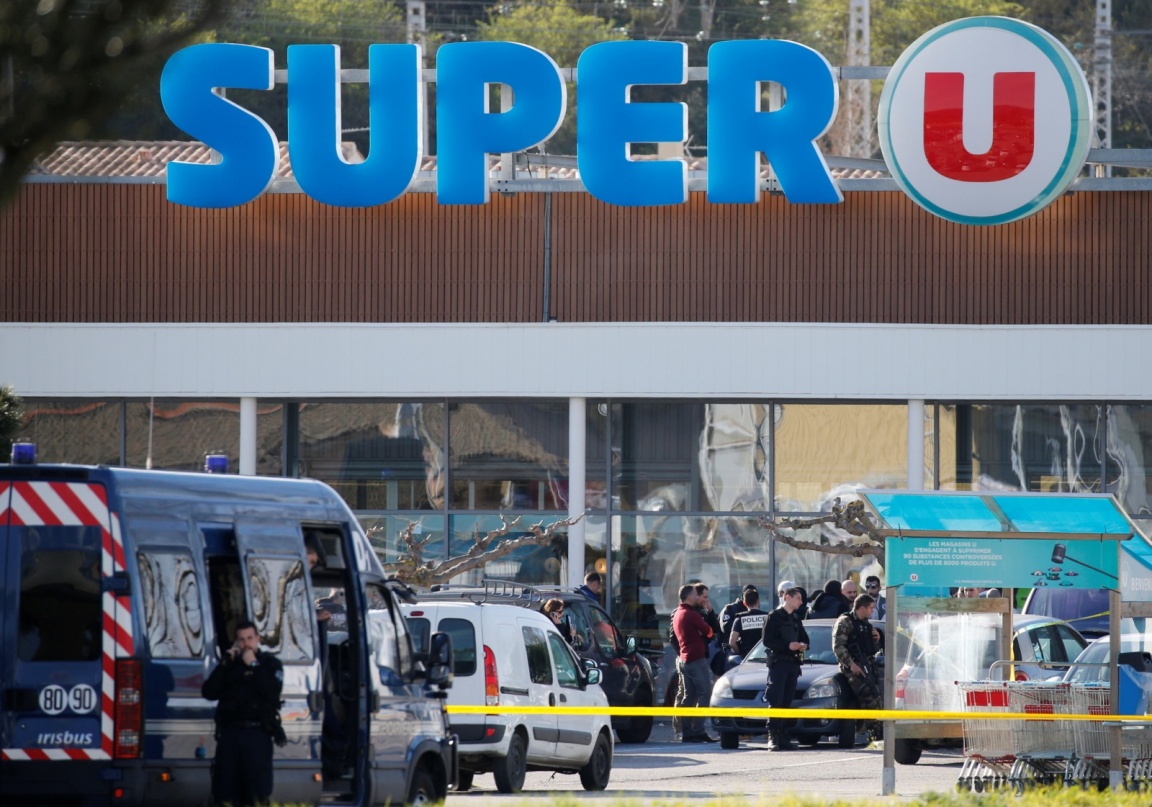 French police officers and investigators are seen March 23 at a supermarket after a hostage situation in Trebes. Pope Francis joined leaders praising a French police officer who "gave his life out of a desire to protect people" during a terrorist attack.(CNS photo/Regis Duvignau, Reuters)

On March 23, in the scenic medieval city of Carcassonne in the south of France, Redouane Lakdim hijacked a car, killing the passenger and wounding the driver. He drove to a police barracks, where he unsuccessfully attempted to run over four officers returning from a jog. He then opened fire, seriously wounding one. Less than an hour later, he entered a supermarket in the neighboring village of Trebes armed with a hunting knife, a handgun, and three homemade bombs. After killing one customer and the supermarket’s butcher and sending dozens of other customers and employees fleeing for the exits, he took everyone who remained hostage. One employee, a cashier named Julie, was taken as a human shield.

Police quickly established a cordon around the supermarket and began evacuations. The French Interior Minister was soon on the scene. Lakdim, a Moroccan-born French citizen, pledged allegiance to the Islamic State and threatened to blow up the supermarket if two conditions were not met. He demanded that the French state stop bombing Syria and that police release Salah Abdeslam, the last living suspect of the November 2015 terrorist attacks in Paris. A few hours later, police stormed the supermarket, killing Lakdim and freeing the remaining hostages. It was the first terrorist attack in France this year.

Lakdim fits the profile of many recent Western jihadis. Having left Morocco as a small boy, he knew the land of his birth but poorly. Nor was he well-assimilated in France. A small-time drug dealer, he was briefly imprisoned. It thus came as no surprise that the community he found on Salafi online message boards provided him with a sense of meaning and identity that he had not found elsewhere. Several people in his circle of friends and family had already been radicalized. They all found a pan-Islamic identity centered around a reestablished Caliphate more appealing than French national identity.

In one key respect this attack was different from other recent ones on French soil. Unlike previous attacks, the news coverage was dominated not by the attack’s perpetrator, but by a Lieutenant Colonel in the police who died during the attack. That policeman, Arnaud Beltrame, was proclaimed a hero from one end of the political spectrum to the other and his image was plastered across the covers of every French publication of note. In homages given to him, a common note recurred: the word “hero” has become debased. Beltrame, it was said, was the real thing. He merits a place in the pantheon of true heroes—heroes as they used to be, heroes as they ought to be.

What exactly had Beltrame done to deserve such praise?

Not only had he died in the line of duty, he also offered to personally take the place of Julie, the cashier, as Lakdim’s human shield. Perhaps eager to make up for his earlier failed attempt at the police barracks, Lakdim readily accepted the exchange. As they changed places, Beltrame left his phone on a nearby table while on a call to colleagues. They were able to follow as Beltrame tried to negotiate with Lakdim inside the supermarket. Some three hours later, Beltrame called out “Assaut! Assaut!” (“Attack! Attack!”). Shots were fired. Police stormed the supermarket, killing Lakdim. Beltrame, who had tried to disarm him, was in critical condition after being shot and stabbed. He was taken to a nearby hospital, where he died during the night. Before Beltrame passed away, he was given his last rites by Father Jean-Baptiste, a priest at a nearby abbey who was to preside at his religious wedding in June. (By French law, the civil wedding ceremony, which Beltrame had already observed, must precede the religious ceremony.)

As Jesus willingly chose to die on the cross, so too his followers ought to be prepared to sacrifice their own lives for one another.
sharetweet

In an interview the next day, the priest spoke warmly of Beltrame, who was a regular at Mass and was undergoing the full Catholic preparatory course for marriage, a rarity in France. He linked Beltrame’s self-sacrificial act with his Catholic faith, quoting John 15:13: “No one has greater love than this, to lay down one’s life for one’s friends.” The allusion was charged with meaning. The verse from the Gospel of John is found in Jesus’s speech to his disciples during the events Christians commemorate during Holy Week; Beltrame was killed just before Palm Sunday. In the passage, which is foundational for Christian ecclesiology, Jesus defines the unity that he has with God the Father as one in which his disciples can also share. What unites them is agape, the unconditional love that pushes altruism to its very limits. As Jesus willingly chose to die on the cross, so too his followers ought to be prepared to sacrifice their own lives for one another.

Beltrame’s wife, for her part, saw her husband’s faith and his professional duty as inextricably linked: it was the “act of a police officer and the act of a Christian,” she said. “The two are inseparable.” His professional formation certainly cultivated a notion of sacrifice for the greater good, and his Catholic faith affirmed the importance of agape and the nobility of self-sacrifice. In the end, however, we will never know what complex mix of these motivations lay behind his choice to replace Julie. Beltrame was an amalgam of seemingly contradictory French attributes—he was both Catholic and a freemason, a pious Christian and a dutiful servant of a strictly secular state. Based on interviews with his friends and colleagues, it seems that from a very young age he was a selfless individual, driven by a personal code of conduct in which honor and sacrifice figured prominently. In that sense, Beltrame’s 2009 conversion to Catholicism and his sacrificial death could be seen as a fulfillment of some forceful, if perhaps latent, part of his personality. But any speculation beyond the comments of those who knew him would be mere conjecture.

Beltrame’s act was so striking, though, that many could not help themselves. In the most widely praised speech in the Assemblée Nationale following the attacks, far-left politician Jean-Luc Mélenchon gave a funeral oration worthy of Pericles or Lincoln. He denounced the violence of terrorism, its “subjugation of reason” and its “abolition of human norms,” before turning his attention to the fallen police officer: “[Beltrame] reaffirmed the primacy of compassion. He took upon himself the primacy of absolute altruism—an altruism that accepts its own death to avoid the potential death of another. In so doing, he illustrated the values of faith and of philosophy to which he himself was personally attached.” Beltrame died for a fellow citizen while carrying out his professional duties as a paid agent of the French state. Beltrame is a civic hero.

Yet Mélenchon’s elegy to Beltrame verged toward the transcendent. Beltrame, he intoned, was “a hero of the human condition.” As an atheist and staunch defender of laïcité (France’s strict form of secularism), Mélenchon not surprisingly chose to focus on terrorism’s affront to reason. Yet, in transitioning from the evils of terrorism to his praise of Beltrame, Mélenchon’s depiction so paralleled the Christian story that he might as well have been speaking of Jesus’s death: “but then, when the worst was in place, evil, yes I dare to say it, evil was vanquished. A great reversal occurred. Lieutenant Colonel Arnaud Beltrame restored the world to order.”

The death of one man provides the basis for a broader unity. Beltrame is also a Christian hero.
sharetweet

As in the Funeral Oration to the Athenians and the Gettysburg Address, the heroic dead are most honored when the living remain devoted to the cause for which they died. For Mélenchon, that cause is the maintenance of national unity when faced with the terrorist threat. “[Beltrame’s sacrifice] leaves us with a duty—a pressing and powerful duty—to refuse the enemy any possible victory. Any victory that might come through division or confusion or polemics meant to tear us apart.” This appeal to national unity based on Beltrame’s act—so unambiguously self-sacrificial and so close to the commemoration of Jesus’s death on Good Friday—carried unmistakeable Christian overtones. The death of one man provides the basis for a broader unity. Beltrame is also a Christian hero.

After the attacks, the political debate revolved around the proper way to combat radicalization. The French police had already identified Lakdim as a potential threat before the attacks, one among tens of thousands of other French citizens. He was even scheduled to appear before a judge to evaluate the level of risk he posed. Lakdim’s radical Salafi convictions put him in fundamental tension with the principle of laïcité. His loyalty to a reestablished caliphate implied an opposition not just to certain French foreign and domestic policies, but to the secular nature of the French state itself. Some French politicians believe such extremism requires a drastic legal response. Following the attacks, the center-right and far-right argued that dual citizens with radical beliefs should be stripped of their French citizenship and expelled from the country. The centrist Prime Minister Edouard Philippe disagreed with the controversial proposal, responding: “we cannot ban an idea; we can only punish the behaviors that result.”

Notably, political division seemed to dissipate during Mélenchon’s speech. Although often at odds with the centrist governing party, the far-left leader praised the government for its handling of the crisis. “Mr. Prime Minister, political opposition that we may be, let us say that we are certain you and your ministers and all the departments of the state have in this case done everything possible within your powers and to the best of your abilities.” He concluded by calling for a day of national mourning for Beltrame and the other victims. As his oration drew to a close, the majority of the Assemblée Nationale stood to applaud, from his own far-left party through the centrist ruling party well into the right wing.

Christopher Schaefer has lived in Paris since 2011.