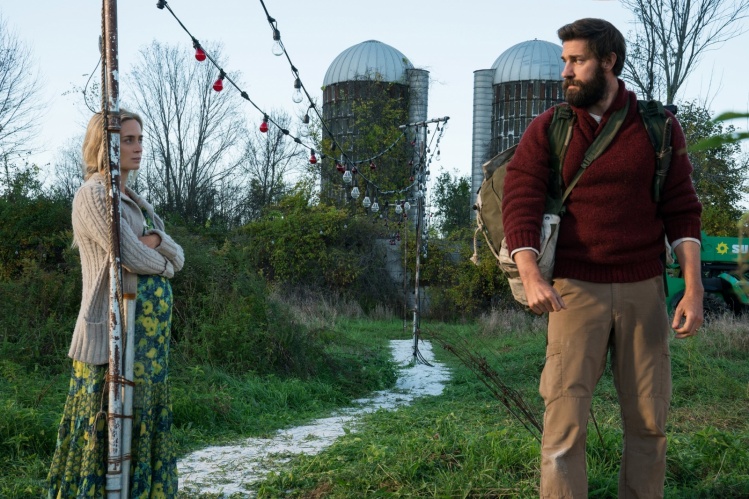 Scary movies are profoundly polarizing. You either enjoy being made to feel unsafe in the world for two hours, or you abhor it and wonder why anyone would willingly submit to it, given how scary real life can be all on its own. Fright films radically simplify human affairs, keeping you plugged into a current of dire anticipation as they reduce their characters—and you—to the rudiments of animal survival. The appeal is not to your soul, but to your central nervous system.

The cinematic means of doing this are many, and each aficionado has his or her preference. I like stalker films well enough; bloodfests leave me cold, and I loathe movies that showcase sadism and sheer physical cruelty, like the detestable Saw franchise. Best are thrillers that draw suspense out, propelling us into a delirium of dread anticipation. (The deft genius of The Blair Witch Project was to do this for an entire film, with no reveal.) I favor movies that make you feel enclosed and entrapped, with evil close by—like 2014’s The Babadook, or Neil Marshall’s 2005 spelunking nightmare, The Descent, in which a group of women lose their way in a cave populated by ghouls. Such films evoke fearfulness via an art of amplification. How much anxiety can be leveraged with the smallest increment of danger?

A Quiet Place is a mishmash of genres, combining survivalist saga, dystopian futurism, sci-fi, horror, and thriller. Boil up a mix of Mad Max and Planet of the Apes; toss in some 28 Days Later; spice with The Descent; sprinkle with a little M. Night Shyamalan; and pour over a bed of Jeremiah Johnson and Swiss Family Robinson. The film takes a moving family and marital story, surrounds it with hideous imminent peril, then adds one shrewd formal innovation that ups the suspense, even as it conduces to unexpected thoughtfulness about human nature and society.

There’s a basic moxie in any director’s putting John Krasinski front-and-center in a fright film. Remember him—the ever-smiling guy who played a quizzical younger counterpart to Steve Carell in the American version of The Office?  Krasinski’s character was your cute little brother who you can’t believe is suddenly twenty-five years old and six-foot-two. Not an obvious choice for horror, but Krasinski also directed this movie, so he can do as he pleases. A bushy beard now covers the boyish grin, helping equip the actor to play Lee Abbott, a thirty-something dad forced by dire necessity into the role of survivalist. The year is 2020, and we are fifteen months into the grim aftermath of an invasion, or infestation, of giant human-devouring creatures, whose freakish speed and bottomless appetite equips them to complete a bloody grab-and-gobble faster than you can say Ouch! Amid the vestiges of civilization, surviving families hide in the desolate countryside, living off the land and squatting in the abandoned farms and houses of those who have been killed, while trying to evade the grisly fate that befell them.

“IT’S SOUND!” screams the boldface headline of a discarded newspaper we glimpse blowing across the sidewalk in an abandoned town
sharetweet

It’s a familiar kind of setup, but Krasinski has a trick up his sleeve, one that adds value and sharpens the survivalist drama by delimiting the nature of the threat. “IT’S SOUND!” screams the boldface headline of a discarded newspaper we glimpse blowing across the sidewalk in an abandoned town; “THEY CAN HEAR US!” And indeed, while the predators are both blind and olfactorily challenged, they possess a hypertrophied, sonar-like sense of hearing that allows them to detect the slightest movement of their prey. In order to survive, humans have had to reduce their noise output to near-nil; to avoid being eaten, they have become mice. In the film’s opening scenes we see the Abbotts practicing relevant survival strategies: tiptoeing around barefoot; pouring noise-dampening sand on the paths outside the farmhouse. In this environment, the family has one distinct adaptive advantage—sign language, which they know because one of the Abbott children is deaf.

A Quiet Place borders on being a silent movie. Krasinski’s conception takes the rudimentary realities of survivalism and simplifies further, via the silence enforced by the special nature of the danger the family faces. The result is a dramatic minimalism in which large consequences turn out to hang on seemingly innocuous and desultory details: two flashlight batteries grasped by a child from a store shelf; red light bulbs strung out on a line; an improvised hearing aid Abbott fashions for his daughter; a single nail protruding from a cellar stair; the wan cry of a baby.

Interspersed in the taut silence are scenes in which the suppression of sound gives way under tightly controlled circumstances, granting human voices a temporary return. One such scene portrays a moment of marital loveliness experienced amid extreme dread, and makes achingly lovely use of a Neil Young song (Young’s plaintive, howling voice makes him an avatar of the mournful cinematic melody; recall the weepy title song of Philadelphia.) In another memorable scene, father and son use a rushing waterfall to mask their voices, and allow themselves to talk, shouting with desperate joy as the water thunders by. These scenes, relieving pressures built up by the suppression of the fundamental human urge to communicate, bring relief for characters and viewers alike, satisfying pent-up needs in ways that bring to bear a dimension of deep humanity.

Krasinski’s two previous films as director are The Hollars, an attempt at bittersweet dramedy, and the David Foster Wallace adaptation, Brief Interviews with Hideous Men, but the current film is far superior, a tightly cut, glittering gem of a movie that spooks you even as it inquires—quietly—into family, language, the persistence of guilt, and the awful sacrifices made out of love. All in all, an extremely canny use of the uncanny.

I had intended to pair A Quiet Place with Ready Player One, Steven Spielberg’s chronicle of the year 2045, when virtual reality has mostly replaced real life, and humans spend their days gaming away in a cyberworld known as the OASIS. But I didn’t get very far. A big part of the problem was the sheer sensory inundation the film subjects a viewer to—its roaring noise and thrash of images magnified by the IMAX screen I saw it on, leading me to second the complaint made by New Yorker reviewer Anthony Lane, who also saw it on IMAX, and notes that “a week later I’m still waiting for the safe return of my optic nerves.” Despite the sensory overdrive and amped-up pacing, the impulse behind the film seemed tedious and tired, and quickly I arrived at the inescapable feeling that its fanboy-gamer enthusiasm and barrage of pop-culture references offered far more punishment than reward. What can I say? Reader, I abandoned it.

Published in the May 4, 2018 issue:
View Contents
Tags
Movies