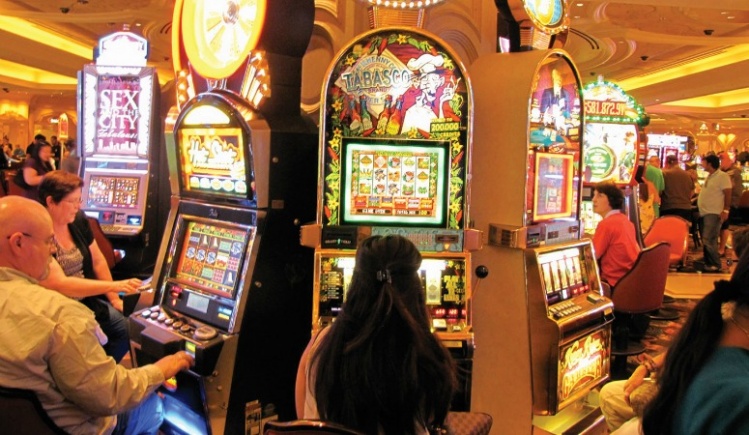 Screwtape is alive and well and living in Vegas.

In C. S. Lewis’s Screwtape Letters, a demon instructs a junior tempter in the art of damnation, and warns his protégé not to neglect quotidian evils.

You no longer need a good book, which he really likes, to keep [your target] from his prayers or his work or his sleep; a column of advertisements in yesterday’s paper will do.... You can keep him up late at night, not roistering, but staring at a dead fire in a cold room. All the healthy and outgoing activities which we want him to avoid can be inhibited and nothing given in return, so that at last he may say…“I now see that I spent most of my life in doing neither what I ought nor what I liked.”

These were the words that echoed in my mind when reading Natasha Dow Schüll’s Addiction by Design: Machine Gambling in Las Vegas. Through interviews with gamblers, machine makers, and casino workers, Schüll assembles a portrait of an industry dedicated to taking more and more while giving less and less in return.

Slots, video poker, and other gambling machines are often described as games, but Schüll’s description makes it clear how completely play is lacking from these terminals. Some machines allow gamblers to “autoplay”: they simply insert their money, press a single button, and let the machine spin on by itself until their credits have run out. And when that option isn’t built into the machine, some of the gamblers manage to jury-rig it for themselves “by loading credits onto the machine and jamming the SPIN button with a toothpick so that it plays continuously.” One player explains to Schüll that she didn’t even look at the cards she was dealt in video poker, simply hitting “DEAL, DRAW, BET MAX” in sequence until her money was gone and she was finished.

That’s more than a waste of time and money—in the view of R. J. Snell, author of Acedia and Its Discontents: Metaphysical Boredom in an Empire of Desire, it’s a sinful rejection of the goodness of the world. Acedia, more often referred to as sloth, is one of the seven deadly sins, and it’s more than mere laziness. Snell describes acedia not as merely doing nothing but as failing to do a particular something: rejoice in the world, and express that joy through participation in creation.

In giving us work, God is asking us to love the world, and we are less like God if we hold back our approval of the world and all that is in it, including our own dynamic agency. Not willing the things of the world, as [Joseph] Pieper means will, is ungodly, diabolical. And work is how we will.

Giving up the chance to work, to participate in Creation writ large or the small made things around us is a kind of sloughing off of our natures. Sinking into acedia is a rejection of the pleasures we were made for, as well as the responsibilities we owe.

More and more, we put ourselves into the hands of subtle Screwtapes like the Vegas game designers, whose manipulations can occur below our levels of conscious perception. Schüll explains that casinos track players’ wins and losses in real time, using an individual’s history of play to predict when the losses might be coming too fast and tempting him or her to stand up and leave. That’s when the casino sends out a “Luck Ambassador” to offer a free drink or any other little blip of pleasure that might induce the player to stay put. Step outside the casino and the constraints on our will aren’t quite as grotesque, but nearly every website you visit is interested in A/B testing what it takes to get more clicks out of you, every app in figuring out how to pull off a fugue state. These tempters are a good deal less romantic than Screwtape, who is at least fighting (on the wrong side) for the soul of his victim. These dull corrupters are just fighting for a share of our wallets.

So, what can give us the strength to say “Get thee behind me, Satan”? The answer, Snell argues, isn’t simply practicing ascetic self-denial, especially not if we’re doing it to cultivate a stoic indifference to the world. Acedia can’t be resisted simply by strengthening our will—we also need to train our will to draw us toward the right things. The opposite of acedia isn’t dutiful work, it’s extravagant joy. Snell writes that “only the lover—the non-slothful—who wills/loves/approves the goodness of the world in comprehensive and ultimate affirmation can celebrate the festival.... Celebration cannot occur without willing the world as God sees it, without loving its goodness; in fact, God’s very nature is celebratory, an endless dance of mirth.”

Schüll’s chilling descriptions of the ways slots designers keep their players immobilized might helped me recognize when I was giving way to temptations large or small in my own life. Dully refreshing a website suddenly feels like a cousin to the “DEAL, DRAW, BET MAX” of Schüll’s subjects, and awareness of the connection is enough to get me to close the tab. And once it’s closed, I need to try to find something active and creative to do and rejoice in, so that I can follow Snell’s advice and offer a physical “amen” to the goodness of God’s Creation. That may take some doing, if the environment around me has been engineered to keep me quietly passing time. It helps to have people and projects that need you, so that opportunities to build and love are as easy to stumble across as invitations to get back online. Children are one of the most perfect ways to be called out of oneself and back into Creation.

Casinos never include clocks or natural light, for fear of orienting their patrons. Schüll and Snell, read in tandem, are a handbook on regaining our proper orientation to the world. Schüll’s book offers a grim warning about the ways others can deliberately cut us off from natural and supernatural joys, and Snell shows us how, even without outside pressure, we can wind up rejecting these joys on our own. Armed with these cautions, the reader is prepared to choose the real pleasures and responsibilities God offers us.