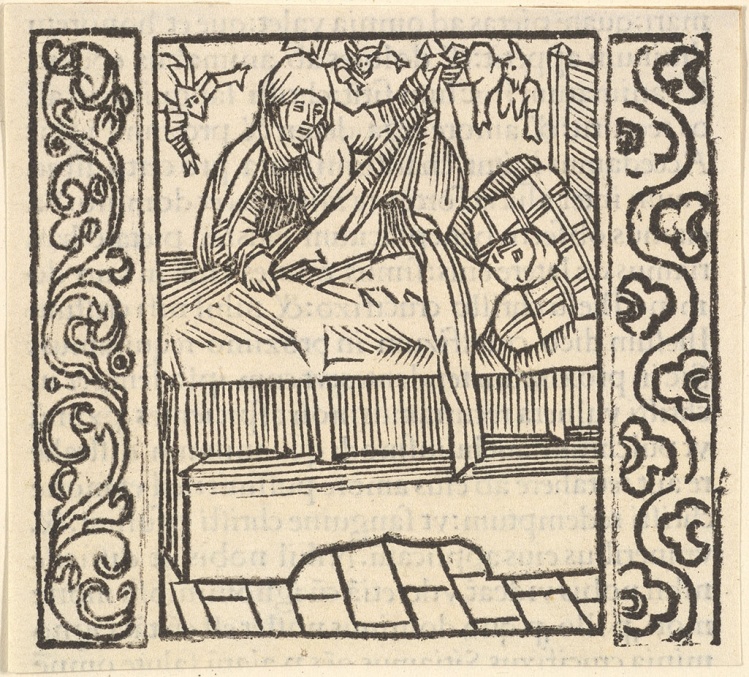 Caring for the Dead, illustration from Speculum Passionis, 1507

In Sarah Ruhl’s For Peter Pan on Her 70th Birthday, death is an idea we have to sneak up on. The play imagines that five children are gathering to help their father die well and to navigate the aftermath. The first movement of the show is set at his deathbed, the second at his wake, the third in a fantasia incorporating elements of Peter Pan. Only in the realm of the imaginary are the characters able to grapple with the reality of death—in the real world, they don’t know how to deal with it.

As their father moans and moves, but does not speak, the siblings disagree, with patience and love, about how to care for him as his death approaches. Ann, the protagonist, opposes her brothers’ plan to keep upping his morphine—regardless of whether it is necessary to treat his pain—to help him avoid a protracted, difficult death. Groping for a way to explain her reluctance, she tells them that when she euthanized her dog she couldn’t shake the feeling she had killed her pet, and she doesn’t want to feel that way about her father. As I watched the play, I was struck by the fact that she had to turn to the example of an animal’s bad death to try to illustrate what a good one might be for a person.

But how many of us are any better equipped than Ann to care for the dying? I realized, watching Ruhl’s play unfold, that all the deathbeds that I’ve seen have been onstage and onscreen. I’ve never been present at one. Or, at least, I’ve never been able to care for someone dying who had already been born—I have been the deathbed for my three children lost through miscarriage. My husband and I arranged memorial Masses, but we didn’t have the opportunity to care directly for our children as they died, or to tend to their bodies. For many people, a parent’s death will be the first one that they see up close. There will be no apprenticeship. They will be responsible, without preparation, for doing right by someone dear to them. Why hold death at such a remove, making us all novices, waiting for a death too close to be avoided before we learn about how to help someone die well?

In American history, death began to be professionalized and managed at a remove from those closest to the dying during the Civil War. In This Republic of Suffering: Death and the American Civil War, Drew Gilpin Faust explains how clergy and doctors stage-managed the deaths of the soldiers they cared for, narrating a good death that drifted toward standardization in the letters they sent to inform the dead soldiers’ loved ones. The bodies, too, were prepared for them, not by them. Embalming first took root in the United States during the Civil War. It offered a way to preserve bodies that otherwise would not have made it home whole.

Over time, caring for our dying loved ones became something one could delegate almost entirely to others.
sharetweet

After the war, embalming by a professional replaced the simple funeral rites of washing a corpse that could be done at home. Cremation, which became legal in England in the late 1800s, offered another alternative to caring for the body in its natural state. In The Work of the Dead, Thomas Laqueur explains how the supporters of cremation praised it as hygienic and modern, falsely characterizing newly dead bodies as pestilent and dangerous. The most responsible thing, they said, was to keep the dead at a distance. Tending to the dead thus became a matter for professionals, an art that required chemicals and fire, not simple soap and winding sheets.

Advances in medicine also contributed to this trend. New treatments and procedures required medical professionals to administer them. Over time, caring for our dying loved ones became something one could delegate almost entirely to others. What had once been a natural duty became optional.

It is unlikely that death will ever become as familiar to most of us as it was to most of our ancestors. Too much has changed. Still, there are things we can do to keep it from disappearing from view altogether. Children should be given chances to witness all the corporeal works of mercy, including burying the dead; and they should be invited to participate as they get older. We can seek out ways to care for the dead and the dying by volunteering at hospitals and nursing homes, or with religious communities like the Dominican Sisters of Hawthorne that have special ministries in this area. We can resolve not to avoid the subject in conversations where it naturally comes up. We can read and discuss books like Atul Gawande’s Being Mortal that help us imagine the choices we will face, and begin to prepare for them. Some may find this morbid, but it is really just a matter of getting serious about our own mortality and that of others. Caring for the dying and the dead is an act of hospitality, the last one we get to offer someone. It is always difficult work, but we have made it harder (and rarer) than it should be by sheltering ourselves so carefully from any glimpse of death.

During my miscarriages, caring for my children in death was the only bodily form of love I was ever able to offer them. This corporal work of mercy is balm to the mourner as well as to the dead. When death comes again, I want to be better prepared to accept this gift of love God sends with every loss.