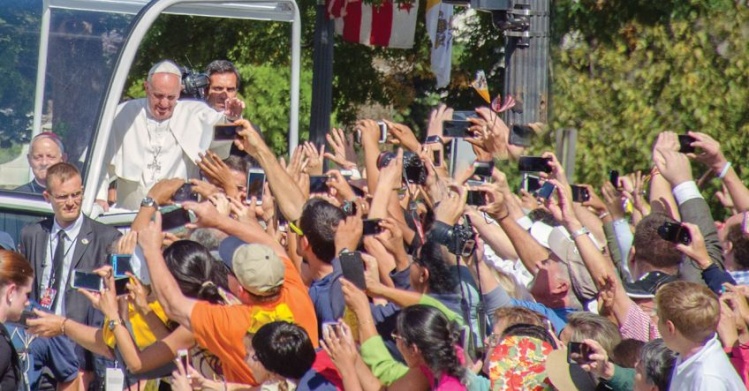 A high-school student on his way home, trying to get through the wall of people on the sidewalk, stopped to ask: “What is this line for?” Around me, teens wearing “Diocese of Albany” name tags scoffed. “The pope, duh,” they said to each other. “Don’t people watch the news?”

In truth, even a very well-informed New Yorker might not have made a connection between the crowd on the Chelsea sidewalk and the papal Mass scheduled for that evening in Madison Square Garden. I was having trouble believing it myself, and I was one of the lucky twenty thousand with tickets to the event. I had expected some waiting. After all, the tickets said we had to arrive by three-thirty, and the Mass didn’t start till after six. I just thought I’d be spending most of that time in my assigned seat on the third tier of the arena. That’s what the organizers expected, too: a pre-Mass concert was planned to entertain the faithful, along with opportunities to pray the rosary, go to confession, and buy refreshments and souvenirs. That concert took place as scheduled, I am told, but not many of us were there to see it.

Arriving at the entrance to the Garden shortly before two o’clock, I found a line stretching ten blocks down Seventh Avenue, across Twenty-third Street, and back up Eighth Avenue. The baffled stares from New Yorkers going about their usual Friday business were understandable. Lines to get into Madison Square Garden don’t normally stretch around the neighborhood for a mile. The NYPD seemed baffled, too. The papal visit was under the jurisdiction of the Department of Homeland Security, whose strategy for keeping the Mass at the Garden safe seemed to come down to not letting anyone in. A similar debacle was unfolding a few miles away, outside Central Park, where crowds of people holding tickets to see the papal motorcade were having trouble getting past the entrances. And those people, at least, had expected to spend the afternoon outdoors. In the line for the Garden I saw women wearing heels, older people with canes, balding men using newspaper to cover their heads in the sun.

“New York, Washington, and Philadelphia will be like fortresses during the visit,” national-security analyst (and former Homeland Security official) Juliette Kayyem wrote in a piece for CNN—but not because of any specific threat. “Instead, the precautions reflect the immeasurable consequences of anything happening to the pope while he is in the United States.” She did not add that there are apparently no real consequences to the Secret Service for bungling something like crowd flow at Madison Square Garden. As for Francis’s well-known preference for being “close to the people,” Kayyem explained that the pope’s personal style obliged the Secret Service to be extra vigilant about which people got close to him. The heightened security, she wrote, “reflects the reality that this particular visit belongs to the Secret Service as much [as] to his adherents.”

I’m not saying the Secret Service ought to let just anybody walk up and shake hands with the pope. But what is the point of distributing tickets if not to make a plan for processing their recipients? Standing in that endless, pointless line for the Garden, I realized, wasn’t communicating our devotion to the faith or affection for the pope so much as our acceptance of the authority of the security state.

After the pope’s stop in Philadelphia I heard more horror stories of endless lines and disappointed pilgrims. I heard about a group of students from the University of Iowa who traveled all that way to attend the pope’s Sunday Mass on the Parkway, tickets in hand, and spent the day standing outside a security checkpoint with thousands of others.

As for me, at five o’clock that Friday, still ten blocks away, I gave in to my aching legs and hopped on the subway, feeling fortunate to have that option. I got home in time to watch the Eucharistic Prayer on TV with my baby in my lap, which I guessed was what Francis would have advised me to do.

The pope went home safe and sound, which means the visit was a success for Homeland Security. They protected Pope Francis. No one is likely to challenge their contention that protecting the pope who has said the church must not be a fortress required turning the city into one.