Our Lady Queen of the Apostles
By Tom Blackburn 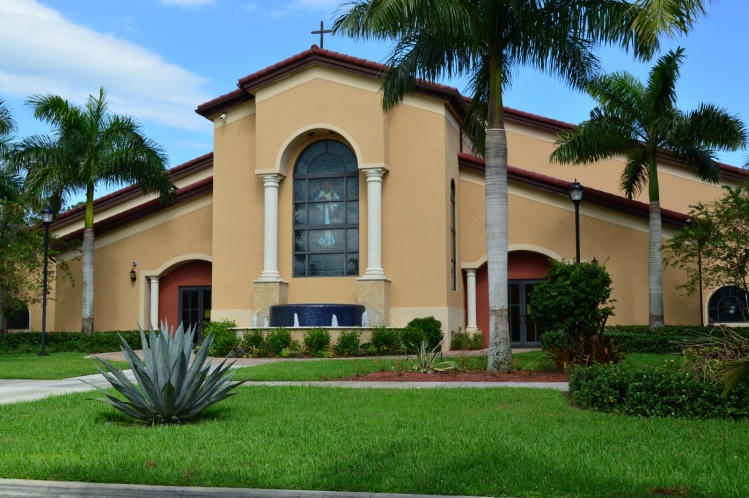 Several years ago at 2:30 on a Saturday afternoon I watched a traffic jam develop in the parking lot of St. Mark’s Church in Boynton Beach, Florida. I asked the pastor if it was a wedding or a funeral. Neither, he said: It was just the usual crowd coming ninety minutes early to claim their pews for the 4 p.m. anticipatory Mass. I was in awe. As we say in Florida, we never did that up North. Saturday afternoon can be as busy at church as the mid-morning Mass on Sunday, even in my own parish. Who knew?

I usher at noon on Sundays and don’t get around as I once did. On June 25, I chose a 4:30 p.m. Saturday Mass so I could get my first taste of this Florida custom. I went to Our Lady Queen of the Apostles in Royal Palm Beach to make it a twofer because it also was my first excuse to get inside a building that was dedicated in 2009 and enjoys considerable local acclaim.

The first thing I did was to arrive early, but it proved unnecessary. Our summer population is half the winter population, and year-rounders are less addicted than snowbirds to Sunday-morning golf. The church was less than half full. OLQA rests among gated communities west of Palm Beach, and the crowd was composed largely of retirees, all dressed like retirees—from polos and chinos down to Bermudas and flip-flops. There was a decent sprinkling of parents with kids.

The second thing I did was enter by the side door, because that’s where others were entering. But that proved the wrong thing to do; architects want you to use the main entrance. But even from the side OLQA makes an immediate statement. It is certainly not old-fashioned, but neither could it answer to the name “modern.” What it most reminded me of—and I don’t mean this pejoratively because I’ve lived in one—is a suburban split-level house with a big living room. The ceiling has faux beams, but it doesn’t soar. This is Florida; you have to air-condition the space you build.

The nave is huge but manages to be homey. The altar is spacious, on a platform three steps high in the middle of one of the lengthwise walls. It faces eight modules of pews that fan out, widening as they gently rise toward the back. The modules range from eleven to fifteen pews deep. The aisles are wide enough for wheelchairs to pass in opposite directions.

I settled into a pew about halfway back on the left side. There was a group of ten or twelve obvious regulars a couple of pews in front of me. I tried to pick out individuals among the twelve Apostles who appeared with Mary in the painted-glass scene over the altar. The figures were realistic, but their grouping was less formal than it would have been in older art. John had a book open. Thomas (I hope it was) had his forefinger raised to make a point to another Apostle, who didn’t seem to be paying a whole lot of attention.

A lector in a pleated white skirt and with just a hint of a New York accent greeted us, and Mass began. There were two altar boys of grade-school age and a deacon along with the presider. The music had a bigger impact than the entrance procession itself: There was one voice with one guitar singing Marty Haugen’s “Gather Us In.” The amplifiers must have been on Rose Bowl setting. I sang but couldn’t hear myself, looked around, and didn’t see many lips moving. I couldn’t see the performer. The choir loft runs the length of the back wall of the nave, and there is enough sound equipment up there to cover any contingencies. Whoever was up there was good, but the sound level made it a strictly solo performance. No one could sing loud enough to join in. It turned out that he was going to sing the Kyrie, Gloria, and Creed as well as the offertory, Communion, and recessional hymns.

Liturgists usually want the readings to be proclaimed and the congregants to put down their worship aids and listen. Tell that to people with hearing problems.
sharetweet

If we’d been able to sing along, we could have followed the words on five-by-four foot screens flanking the altar, or on the smaller screens along the side aisles. The readings also appeared on the screens. Liturgists usually want the readings to be proclaimed and the congregants to put down their worship aids and listen. Tell that to people with hearing problems. Personally, I’ve no problem with audio-visuals; I ignore them. But the screens are so big they couldn’t be missed, and I noticed that listening to St. Paul’s run-on sentences while following them in print actually made it easier to get his point. That’s a non-scientific datum, but I pass it on to liturgists for what it might be worth.

The homily also was accompanied by a slide underlining the conclusion. Fr. Brian Campbell obviously prepared it long before he vested. He has a rep to uphold. He is in a rotation with three or four other homilists who provide commentary on upcoming Mass readings in the diocesan edition of the Florida Catholic. Saturday he used Florida’s many water bodies as metaphors to discuss both St. Paul—on Adam making the waters turbid though sin—and the Gospel—which says that what’s concealed will eventually become clear when the waters are stilled. He asked God to calm and cleanse us. He was vivid enough that I was able to quote buckets to my wife when I got home. She said, dryly, that I could have read it in the Florida Catholic. Sure enough, his homily was in print, although he added some topical asides in his live appearance.

There were mics on the ambo and altar. Neither put out as much sound as the music sound system, but neither did Fr. Campbell or the lector have to fuss with them. I thought of comparing the Mass experience with watching a movie in a viewing room for critics. All that was missing were soft swivel chairs. The church’s AV system showed us what we heard and made it audible. It sang for us. I suspect that, if asked, it would bring coffee.

But then, suddenly, everything changed. With the Sanctus, lights above the congregation dimmed. Maybe they also brightened on the altar. It happened in a snap. But with just that change in lighting, a family dining table became an altar of sacrifice. The canon proceeded with as much focus, concentration, and sanctity as any unreconstructed pre–Vatican II reverence-seeker could want. For Communion, the lighting switched back.

Since the Second Vatican Council we seem to be indelicately poised between the Mass as a family meal, like Passover, and the Mass as sacrifice, continuing Calvary. What serves one seems to pull against the other. I think OLQA has a real answer. Maybe the lighting maneuver is widely used, but the balance of meal and sacrifice impressed me even more than the church itself.

On the way out, I looked around the narthex, which I should have seen first. It is a long hall, sacristy to the right, gift shop to the left, and a baptismal font big enough for full body immersion in the center. A built-in adoration chapel and life-sized statues of St. Teresa of Calcutta and St. John Paul II—which must have been planned and ordered for the church before either was canonized—tell you where the pastor’s heart is. He is Fr. Z. Andy Rudnicki, who is still there. He was a parochial vicar in my parish years ago in his early priesthood. From the bulletin I learned that OLQA dedicates the month of October to reinforcing everyone’s spirituality, and as we left the Mass ushers were handing out copies of the small Mass Journal that Matthew Kelly’s Dynamic Catholic group promotes to help folks develop spiritual life.

Fr. Rudnicki is able to summon eight ushers and at least six extraordinary ministers of Communion, without overlapping, for the Saturday afternoon Mass. Coffee is served in a covered pavilion opposite the main entrance on Sundays. That suggests Our Lady Queen of the Apostles is a welcoming place. I felt I could get used to it very quickly.

I guess I’ll have to wait until after Thanksgiving to experience a real Saturday anticipatory Mass scramble. It’s quiet now in Royal Palm Beach because so many folks are up north, sending postcards that say, “Sleeping under blankets.” But Our Lady Queen of the Apostles is a fine place to be if you are stuck here for the summer.

Tom Blackburn is happily retired after fifty-three years as a journalist.