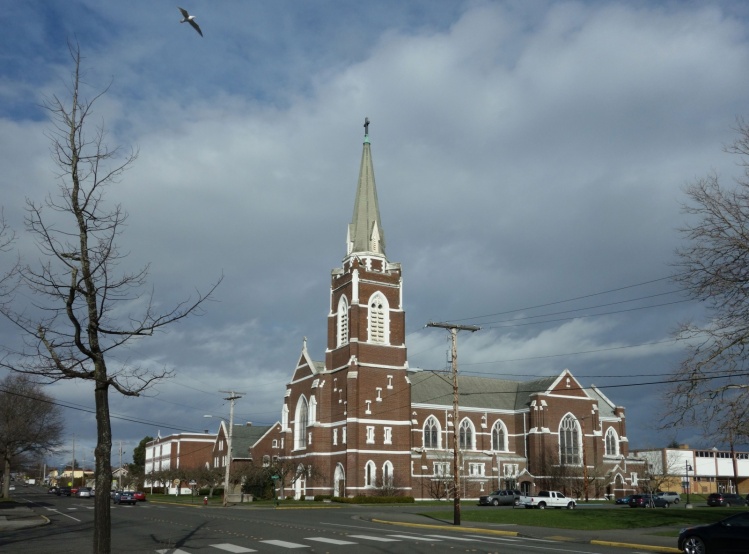 The featured front sign reads “Church of the Assumption / Iglesia de la Asunción,” with the 12:30 Mass parenthetically marked “Español.” The cornerstone reads “Church of the Assumption 1920.” I enter through one of the three doors facing the street, the foot of the cruciform church. I bless myself at the grey marble holy font in the narthex and enter the nave. There is no air conditioning, but the muted lighting of the church is cool and shade-like and the smaller stained-glass windows are cracked open. I genuflect and take my seat in the dark, heavy wooden pew toward the front of the back half of the pews.

The somewhat narrow hall-like shape of the nave allows me to observe the four side altars from my seat, dedicated to Our Lady of Le Vang and Saint Kateri Tekakwitha, to my right, and Saint Lorenzo Ruiz and Our Lady of Guadalupe, to my left. I thumb through the Flor y Canto songbook waiting for Mass to begin. Before the opening procession, a man in a black button-down shirt takes the mic and informs the faithful that there is a second collection in support of Fr. Francisco’s school in Uganda. “Nos ponemos de pie” brings us to our feet.

The music ministry plays “Tomen Agua Viva,” intoned by a man on the right-hand side of the pulpit, with accompaniment from a baby grand piano and rhythmic tambourine, situated behind the main altar. Bright-red digital numbers on a device above the cantor podium on the right-hand side of the church show the selection number from Flor y Canto. The procession comes in through the left-hand side of the sacristy, with all the extraordinary ministers walking in pairs. The celebrant is, I presume, the aforementioned Fr. Francisco, an African priest from Uganda. He takes his seat on the right side of the altar, angled to face it. Not quite ad orientem, but similar.

It is immediately clear to me that the celebrant does not speak Spanish and is reading the Mass using his facility with church Latin to say the Mass in phonetic Spanish. The giveaway is the hard “ch” sound used on the letter “c.” “En el nombre del padre, del hijo y del espíritu santo.” “Y con tu espíritu.” (I am reminded that the Spanish version of the Mass required no new translation.) We sing “Señor ten piedad” for the penitential rite and the Gloria and sit down for the Liturgy of the Word. At this point I count between 150 and 175 people. The lectern is on the left-hand side of the church and, like the pulpit on the right-hand side, it is set back from the main altar. A woman reads the first reading and the cantor sings the psalm. I notice that the altar and floor surrounding it are made of identical grey stone.

A mother and daughter approach the lectern for the second reading and the mother, wearing a turquoise blouse, proclaims the word with confidence. The Gospel acclamation is sung in the typical, rhythmic alleluia of Latin America. The Gospel procession consists of Fr. Francisco carrying the gospels with two altar servers, both boys, carrying candles. The priest reads in his Latinate style, which in this case is a bit more laborious. A woman sitting behind me says the word “agobiado” aloud to try and cue him as he sounds it out, but he is out of earshot. “Gloria a ti señor Jesus.” The priest and altar servers return to their seats.

The same man who gave the opening announcement approaches the lectern with some notes in his hand. He reads a translation of Fr. Francisco’s English homily in Spanish. The homily begins wishing everyone a happy Fourth of July and, referring to the responsorial psalm, he notes that we praise politicians and athletes but sometimes forget to praise God. Citing St. Paul, he criticizes those who treat the sacraments as mere routines and give higher priority to birthdays and vacations, adding that we must think of the poor who Jesus tells “come to me.” The homily ends with the common liturgical greeting and the congregation replies, “y con to espíritu.” During the penitential rite and throughout the readings and homily, families arrive and sit, numbering well over two hundred people at this point.

We recite the creed, and the lector for the second reading reads the petitions. One of the petitions is for the nation to care for the poor and the needy. The petitions for the sick and the dead name them individually. The offertory song is “Entre Tus Manos.” The collection is taken up by children and youth, mostly, and a mother and two children bring up the gifts, led by the cross-bearing altar server. Responses to the Eucharistic acclamations are cacophonous in volume and pace. The “Santo” is sung and everyone kneels for the prayers of consecration. At the elevation of the bread and the cup, the bells ring out three times, drowning out the voices and pew-sounds made by children for a few moments. The congregation is at 250 people now, many of them families. The congregation anticipates the Great Amen, but the acclamation is sung as well, as the kneelers are raised and pound the pews.

A couple approaches me from behind to give me peace, noting that I am “solito” (all alone, in an affectionate diminutive tone).
sharetweet

The Our Father is sung and the congregation hold their hands in the orant position, many holding hands. The sign of peace is lively and friendly. A couple approaches me from behind to give me peace, noting that I am “solito” (all alone, in an affectionate diminutive tone). The Lamb of God is rhythmic and the congregation remains standing for the final Eucharistic prayers. The Communion song, “El Pan de la Vida” begins and the Eucharistic ministers line up behind the altar where Fr. Francisco distributes Communion. The hosts are in a crystal paten and the chalice is silver. Four lines for the Body of Christ are set up with two lines for the Blood. No ushers direct the communion line, but it moves fairly quickly, especially as it reaches the back of the church, where many do not approach to receive Communion. About 60 or 70 percent of the congregation takes Communion, the rest remain in their pews.

After Communion, the man in the black shirt takes the podium and goes through the week’s announcements. The first is about a collection of socks for charity, the second is about the local department of health doing talks in Spanish on well-being, and the third reminds the faithful again about the second collection for Fr. Francisco’s school in Uganda (this makes sense to repeat, since many were not there at the first pre-Mass announcement). At this point the liturgy is wearing some children down and many run around and cry, a sign of life and a future. The last announcement is to thank Fr. Francisco for his effort to speak in Spanish, which receives a thunderous and heartfelt applause.

The second collection follows as Fr. Francisco, in English, thanks the congregation for their generosity and says that the Ugandan children pray for them and that he also prays for them. The final blessing follows and the recessional song is the up-tempo “Demos Gracias al Señor.” The congregation claps in various patterns, some on every other beat, several on every beat, a few emphasizing other beats. The song goes on well after the procession has finished and the church begins to empty. The faithful greet each other and talk as they leave through the door I entered. At this point I notice that several women wear black mantillas. Several of them, along with others, pray at the side altar, and bring offerings of flowers. At the altar of Our Lady of Guadalupe, the Mexican faithful pray, light candles, and several venerate Our Lady with kisses.

I walk to the altar and see the wooden statues of Saint Joseph the Worker, to the right, and Our Lady of Fatima, to the left. In the four corners of the ambulatory, surrounding the crucifix in the center, are the paintings of the four Evangelists. Toward the end of the nave, on the left-hand side, there is a large red candle and a door to a reposition chapel, where several are praying. Next to the altar, on the left side, there is a large baptismal font with a cruciform glass structure atop a brown and white marble base. Further to the left are doors that open into a vestibule that leads into the parking lot and parish grounds. Many congregate here, with lively conversation that spills into the parking lot.

I grab a bulletin and notice that, like the welcome sign outside, it is mostly bilingual. I walk out into the parking lot area and see the rectory and a seemingly vandalized statue in a landscaped flower garden. From this side view the church shows its age a bit more than the side I entered from. The iconic image I approached when I entered now seems more worn and in need of roofing. At the front a group of families greets one another in Spanish asking what part of Mexico they are from.

Sam Rocha teaches at the University of British Columbia.