Nativity of the Blessed Virgin Mary
By David Carroll Cochran

Since my wife and I have both worked with priests in the Archdiocese of Dubuque, Iowa, we decided to avoid any awkwardness by crossing the river to a neighboring diocese for Mass. Our two teenage sons came along, placated for having to rise earlier than usual by the promise of donuts on the way home.

We chose a rural parish, one of the red-brick Gothic Revival style churches that still dominate the skyline of small towns across this part of the Midwest. The church was built in the 1870s, has fewer than two hundred registered families, and offers one Mass on Sunday morning. It is clustered and shares a pastor with a larger parish several miles away.

The church sits on a hill with a view of the rolling farmland around it. On one side, as if to emphasize the ratio of current-to-past parishioners, is a small parking lot and much larger cemetery, while on the other side, down the hill, are a bar and a firehouse. A large tower with spire anchors the entrance-side of the building, an apse extends out of the altar-side opposite, and tall stained-glass windows run the length of both sides between them. 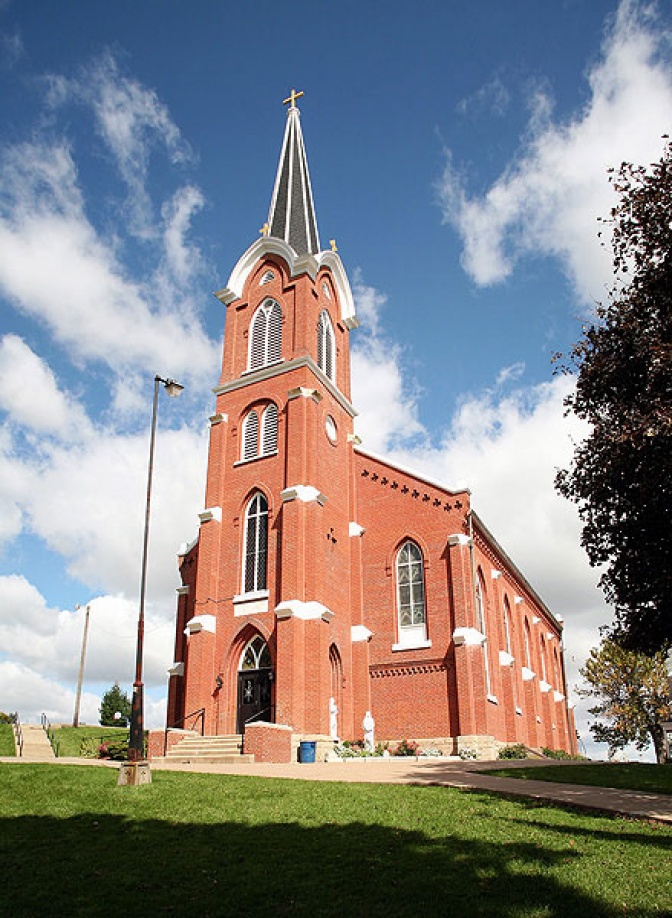 Nativity of the Blessed Virgin Mary

Arriving ten minutes early to look around the church, we were among the first ones there. We entered under the choir loft and sat in a pew about halfway up the center aisle. While the church may be tall, it is not large. Its wooden floors and pews creak pleasantly, and the pew backs still have hat clips every few feet. The walls are white plaster with Stations of the Cross oil paintings between the windows. The gaze is drawn to an ornate high altar at the back of the apse, tabernacle at its center. In front of it is a simpler altar-table, flanked by a pulpit on one side and chairs for the priest, deacon, and servers on the other. The back walls are crowded with statues of angels and saints, a crucifix with bright red marking Christ’s wounds, and a Divine Mercy painting.

We’d intended to blend in by sitting where we did, but our choice backfired: almost everyone else took seats toward the back of the church, leaving us, a few older women, and a latecomer or two in sole inhabitance of the front half of the nave. Closer inspection at the Rite of Peace and Communion yielded a congregation profile. Numbering around seventy, it skewed older and middle-aged, though with a few younger couples mixed in. There were only three or four young children, and our kids doubled the number of teens present. Casual dress predominated. Like the figures in the church’s statues and paintings, all were white.

Mass started right on time. A young female cantor welcomed the congregation and announced that we would have a guest celebrant. My wife and I shared a smile as we recognized the recently retired priest from our own archdiocese, who had also crossed the river for Mass that morning. What followed was a serviceable liturgy—familiar, meaningful, and heartfelt, but not especially moving or spirit-filled. An ordinary Mass, though not in Ordinary Time, as it clocked in at a brisk forty-five minutes.

Led by the cantor in front and an organist and small choir in the back loft, the music was solid, though the cantor struggled a bit with the Responsorial Psalm. There was the usual selection of songs, ranging in style from “Canticle of the Sun” for the processional to “Praise God, from Whom All Blessings Flow” for the recessional. The congregation’s singing was dutiful but not enthusiastic.

A female reader did a great job with the first and second readings—clear and measured, her tone appropriate to the text—while the deacon was reverent but a bit more rote when reading the gospel. Delivering his short, six-minute homily without notes, the priest was warm and genuine. Picking up primarily on Jeremiah in the first reading but bringing in the Gospel’s call for fearless witness to Jesus, his focus was prophetic service to the poor in the world today, invoking Martin Luther King Jr. and Pope Francis. An amusing story from his past added a bit of humor, even if its connection to the homily’s actual message was less clear.

An ordinary Mass, though not in Ordinary Time, as it clocked in at a brisk forty-five minutes.
sharetweet

The priest was efficient but sincerely prayerful presiding over the Liturgy of the Eucharist, and the deacon was an unobtrusive presence. There were plenty of friendly smiles and warm handshakes at the Rite of Peace. The Blood of Christ was not offered to the congregation during Communion, something I had not seen in some time. This meant the priest and deacon were sufficient to distribute the Body at the front, while a female eucharistic minister went up to the choir loft.

Aside from the absence of the Blood of Christ at Communion, what really stood out to me in an otherwise typical Mass were the altar servers: three pre-teen to early-teen boys who seemed transported from pre-Vatican II days. Rather than the bed-head and ill-fitting albs over shorts and sneakers you might expect at a summer Mass, these guys had the long dark cassocks, white surplices, short combed hair, neat shoes, and precision movements of early 1950s altar boys. During the Liturgy of the Eucharist, they came around and knelt directly in front of the altar facing the priest with their backs toward us, and, after ringing the bells at each elevation, they bowed in unison all the way down until their foreheads rested on the floor. While almost all the congregation would take the Eucharist in the hand, they each took it on the tongue and then held a long-handled paten under each transfer during distribution to the rest of us. Tonally at odds with the rest of the Mass, the servers were impressive but also a little distracting, in a Stepford-wives-kind-of-way; I half expected to see them powered down and put back in storage until the following Sunday.

Normalcy, however, was restored on the way out: the bulletin I was handed looked exactly like every other bulletin I’ve ever seen. Perhaps it’s the simple church bulletin that provides the true source of Catholic unity and continuity in a rapidly changing world. Included among the tight grid of small ads on the back, instantly recognizable in its layout, was one for our local liquor store, reminding me that we were running short of some necessities for the week ahead. But first, donuts.

The View from Iowa