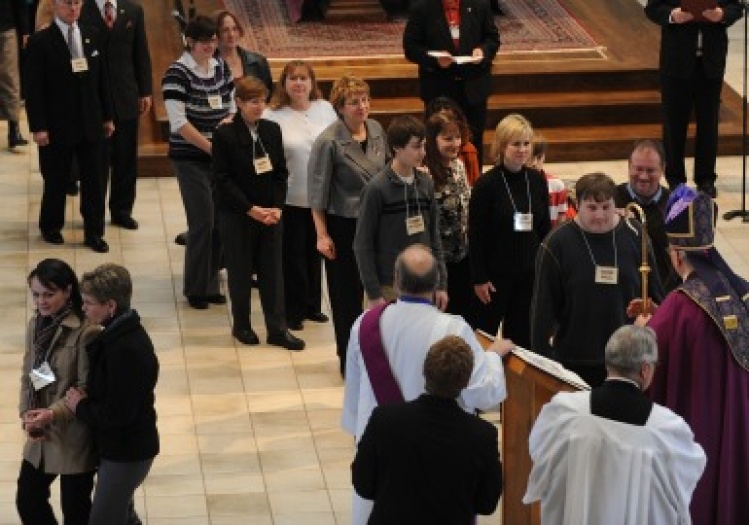 It's the night of the Easter Vigil. After the lighting of the new fire, the glow of candles in a darkened church is a vivid reminder that the light of Christ, shared in baptism, lights up our common life. The restoration of the baptism of adults to its primary place in the church’s ensemble of rites for the Easter solemnity underscores the treasure we have, and share, in baptism. But baptism is in trouble in the United States. Not only is infant baptism declining throughout Catholic dioceses, but adult baptism has been diminishing too—and at a startling rate.

In 2000, the U.S. bishops published a scientific study (the only one to date) about how the Rite of Christian Initiation of Adults (RCIA) is faring. The news was encouraging. Seventy-five percent of U.S. Catholic parishes were using it. Most people who participated rated their experience “good.” RCIA was also shown to have the best retention rate of any sacramental preparation process in the church today: 64 percent of Catholics who went through RCIA attended Mass weekly after initiation; 50 percent were active in parish ministries and committees.

The bishops affirmed that the RCIA “has the power to transform parishes when implemented as the rite is intended.” No other rite of the postconciliar era has received such a strong evaluation, but the bishops’ praise seemed fitting when one saw what was happening. The active involvement of sponsors, parishioners, and teams of laypeople, as well as clergy and pastoral staff, produced a revitalization of the parish from the base up. For many, RCIA was perceived not merely as a means of adding new members to the rolls, but as a way of rejuvenating the faith and increasing the joy of those already in the pews.

According to Balthasar Fischer, chairman of the committee that reformed the rites of baptism after Vatican II, those who worked on the new rites thought a lot about the idea of mater ecclesia. They hoped that the renewal of baptism would eventually—certainly not in their lifetimes—lead to a deeper sense of the whole church as the bearer of new life. Yet as early as 1987, when Fischer visited the United States and was introduced to examples of RCIA in parishes, he remarked with astonishment that it was already happening.

The bishops mandated the rite in 1988, and the number of candidates steadily increased. Then the bottom dropped out. From 2005 to 2010 adult baptisms fell by 41 percent. Those losses were masked by a slight gain in the number of adult receptions into full communion—those already baptized in another Christian community. But then those totals began to fall too.

The dropoff has slowed, but the losses were never regained. There are 49 percent fewer adult baptisms today than there were in 2000. In 2013, the North American Forum on the Catechumenate, the premier agency for training in the ministries of Christian initiation, closed its doors for lack of participants in its institutes. The bishops have not given much sign of having noticed; their attention seems focused elsewhere.

Why the sharp downturn? It’s not for lack of talk about “the new evangelization.” Short of another survey, however, one can only speculate. The sexual-abuse crisis has taken its toll in morale and money. Still, it’s worth noting that despite sustained media accounts of the scandal beginning in 2002, the number of adult baptisms held steady for three more years. The decline did not begin until John Paul II died and Benedict XVI was elected. Perhaps people who were considering becoming Catholic perceived a change in direction in the church and decided, “This is not for me.”

Will the “Francis effect” reverse this trend? Early reports are promising, but the number of adults seeking baptism would have to double in order to reach pre-2005 levels in absolute terms, and increase even more to hold its own relative to the growth of the Catholic population as a whole. To bank on Pope Francis as some sort of deus ex machina without a corresponding effort to rebuild the conditions that made adult baptism grow before 2005 would be absurd.

No, we need to return to what spurred the growth in the first place: hospitality, a sense of faith as a journey we undertake together, reliance on the word of God and human experience over textbooks, and the celebration of rites that boldly use symbols. If we are to revive the mandate of mater ecclesia, the bishops must embrace the liturgical reforms of Vatican II, instead of paring them away.