The Shortcomings of 'Mad Men'
By Celia Wren
Media
Television 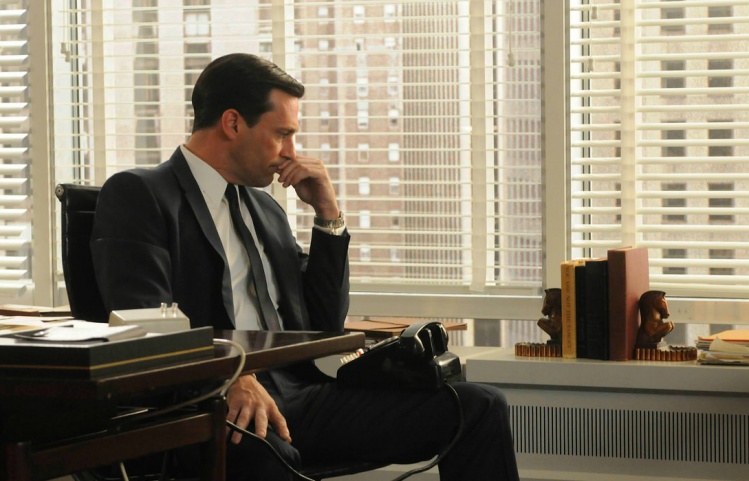 Anyone who has watched all seven seasons of AMC’s Mad Men might have found some irony in a striking image from one of the show’s final episodes. After abruptly leaving the advertising agency he helped to build, we see a stone-faced Don Draper driving across middle America. He stops to pick up a hitchhiker. The camera pans to take in the flat rural landscape. David Bowie’s “Space Oddity” begins to play. Flanked by cultivated fields and telephone poles, the highway stretches ahead, straight as an arrow, not a twist or turn in sight. If only the show itself—which began with such promise—had shown such sure direction.

From its central narrative vision—a conjuring of 1960s advertising staffers at work and play—some plotlines meandered this way and that, only to hit a dead end. Colorful characters appeared, stealing focus from the leads, then vanished. Remember the enigmatic, smarmy up-and-comer Bob Benson? The closeted art director Salvatore Romano? The young priest, Fr. Gill, whose friendship with Peggy Olson seemed so poignant in the aftermath of her hushed-up pregnancy? These and other figures and storylines ended up going nowhere.

It should be noted that, because of Commonweal’s publishing schedule, I am writing before the show’s final two episodes have aired. It is possible that show creator Matthew Weiner and his colleagues will tie up all the dangling narrative threads in a powerful conclusion. But even if they should achieve such an improbable triumph, the fact remains that, for too many seasons, Mad Men has seemed exasperatingly diffuse.

The flaw was all the more apparent because, in its first year, Mad Men displayed so much momentum. The show’s initial claim to fame was its gleefully ogling portrayal of a recent but alien past—a time when smoking and workday drinking were casually accepted, and the sexual harassment of secretaries was business as usual. For twenty-first-century audiences, exoticism is hard to come by. What passes for exotic these days is the past, and Mad Men turned its lens on that past with unflinching glee. (The meticulous art direction and costume design were always invaluable in this regard.)

But the strangeness of the 1960s milieu was not just for gawking; it also added to the show’s suspense. Watching the initial season, you were always aware that the tale’s pre-feminist, pre-political-correctness dispensation was about to expire. The broodingly tense dynamics of the suburban Draper household—home to Don Draper (Jon Hamm), his unhappy wife Betty (January Jones) and their children—always seemed on the verge of combustion. It wasn’t until the final season, which takes place in 1970, when the women of Mad Men showed signs of a feminist awakening.

Adding to the suspenseful mood was the matter of Don’s momentous secret—the fact that he had grown up as the dirt-poor Dick Whitman, before switching identities with a deceased serviceman at an opportune moment during the Korean War. The imposter theme seemed to add to the show’s dark, mythic dimension. Don was not just an impossibly handsome, chronic philanderer with a genius for PR—the activity that often seems to have worked its tentacles into every aspect of modern culture. Don was also a Jay Gatsby–style figure whose adventures echoed the American dream: Be anyone you want to be.

But the double-identity story fell by the wayside too. Don went from being mysteriously interesting to frustratingly opaque—a quality reinforced by Hamm’s (perhaps deliberate) inexpressive acting style. Always an enigmatic figure, Don never gave the series much of an emotional through-line. Partly as a result, the show’s flood of anecdotes and small stories, featuring larger characters like the amiable rapscallion Roger Sterling (John Slattery) and the sultry office manager Joan Holloway (Christina Hendricks), as well as pleasingly idiosyncratic smaller ones (the aforementioned Bob Benson, et al.), often felt shapeless. Of course, history itself inevitably provided some structure; but the scenes that registered public events—the assassination of John F. Kennedy; the assassination of Martin Luther King Jr.; the moon landing—often seemed more perfunctory than thoughtful.

To be fair, the story of Peggy (Elisabeth Moss), the ambitious but vulnerable secretary-turned-copywriter-turned-creative-force, has always had a discernable contour. And, given Moss’s knack for infusing the character with loneliness, awkwardness, yearning, and sometimes arrogance, that story has always been affecting. As Don set out in his Cadillac, in the lead-up to the show’s conclusion, Peggy’s career looked set to founder amid the sexism of the workplace. Despite the shortcomings of the storytelling in previous seasons, I couldn’t help hoping that Weiner would pull off a feat of narrative synthesis—a final episode that would knit Peggy’s saga, and all the other storylines, into a gratifying finale.