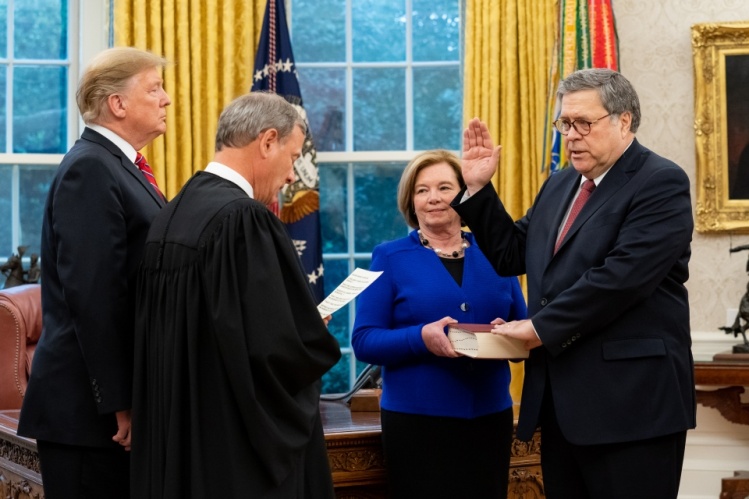 The House Judiciary Committee should not have had to vote Wednesday to subpoena special counsel Robert Mueller’s report. It should already have been sent to Congress. The fact that the body’s Democrats had to take this forcing action underscores why Attorney General William Barr’s handling of the document so far is irresponsible—and, yes, suspicious.

Let’s look at the timeline. Mueller submitted his report March 22. Two days later, on March 24, Barr issued his four-page letter that included not one complete sentence from the report. Barr quoted the report as saying: “[T]he investigation did not establish that members of the Trump Campaign conspired or coordinated with the Russian government in its election interference activities.” Note that the quote leaves out the beginning of the original sentence.

Looking at everything Barr is doing with a suspicious eye is, at this point, the only safe thing to do.
sharetweet

And note also that Barr’s own words said Mueller “did not find that the Trump campaign or anyone associated with it conspired or coordinated with Russia.” The phrase “did not establish” is not the same as “did not find,” but we have no way of knowing, absent the report itself, how significant that difference is. What we do know is that Barr seems to have put the best possible spin for Trump on what Mueller himself wrote.

Indeed, The New York Times reported Wednesday evening that there is dissatisfaction on the Mueller team with Barr’s account.

“Some of Robert S. Mueller III’s investigators,” the paper reported, “have told associates that Attorney General William P. Barr failed to adequately portray the findings of their inquiry and that they were more troubling for President Trump than Mr. Barr indicated.”

Yet another reason why Congress and the public need to see the real thing.

And The Washington Post reported that “some members” of Mueller’s team “were particularly disappointed that Barr did not release summary information the special counsel team had prepared.” Barr needs to release those summaries, too, and be asked why he didn’t make them public in or with his March 24 letter.

On obstruction, Barr quoted the Mueller document saying that “while this report does not conclude that the President committed a crime, it also does not exonerate him.” Then, Barr made an astonishing assertion: “The Special Counsel’s decision to describe the facts of his obstruction investigation without reaching any legal conclusions leaves it to the Attorney General to determine whether the conduct described in the report constitutes a crime.” Barr, who had already criticized what he took to be Mueller’s theory on obstruction before he became attorney general, went on (surprise, surprise) to absolve the president, writing “that the evidence developed during the Special Counsel’s investigation is not sufficient to establish that the President committed an obstruction-of-justice offense.”

But wait a minute: Did Mueller’s decision not to make a call mean that it was Barr’s decision to make? There is nothing that automatically gives Barr that power. Perhaps Mueller intended to leave the decision on obstruction to Congress, not to Barr. Maybe Mueller was silent on this issue in his report. Maybe he wasn’t. We can’t know, because we haven’t seen the report.

And then came a strange letter from Barr on March 29 in which he complained that many were “mischaracterizing” his March 24 letter.

“My March 24 letter was not, and did not purport to be, an exhaustive recounting of the Special Counsel’s investigation or report. ... I do not believe it would be in the public’s interest for me to attempt to summarize the full report or to release it in serial or piecemeal fashion.”

So a summary was not a summary, and his first letter was, well, incomplete, or at least not “exhaustive” or ... well, what was it? A news release? President Trump certainly had no problem crying from the heavens that Barr’s letter was a good-enough summary for him and that it cleared him of everything.

Which means that looking at everything Barr is doing with a suspicious eye is, at this point, the only safe thing to do. Especially when Trump, who had previously said he had no problem releasing the report, complained on Tuesday that it was a “disgrace” that House Judiciary Committee Chairman Jerrold Nadler, D-N.Y., was now demanding the very sort of disclosure the president had once endorsed. Trump, it would seem, was for releasing the full report before he was against it.

When the committee voted for the subpoena on Wednesday, Nadler said: “The Constitution charges Congress with holding the president accountable for alleged official misconduct. That job requires us to evaluate the evidence for ourselves—not the attorney general’s summary, not a substantially redacted synopsis, but the full report and the underlying evidence.” In light of everything that has happened since Mueller turned in his report on March 22, how could Congress settle for anything less?