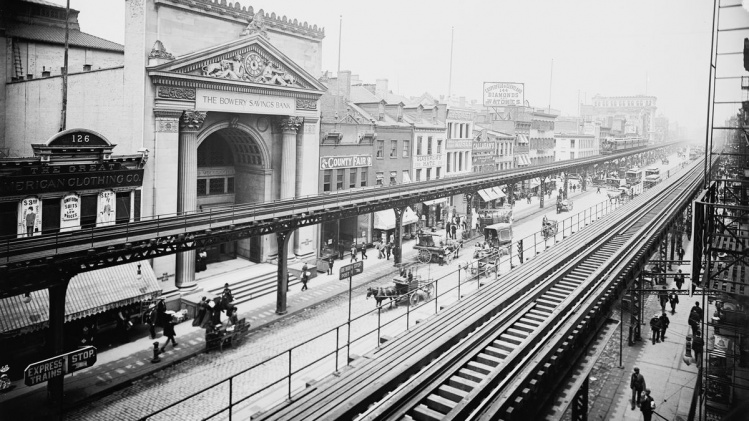 My first visit to New York City’s Bowery was as a child. My Aunt Gertie took me to a Catholic mission around the corner. It was Christmastime and Gertie was delivering clothing collected from fellow telephone operators for, as she informed me, “the bums.” My memory is of a wintry Walpurgisnacht. Tattered men huddled around barrels of burning scrap wood, or lay in doorways, or staggered out of brightly lit, evil-smelling bars. I was distressed by the destitution, but Gertie, who grew up not far away, seemed unbothered. She brought along a purse full of dimes that she handed to any who asked.

The few times I returned as an adult were on forays to inexpensive lighting stores tucked among missions, gin mills, and flophouses. Yet I detected a faded dignity behind the Bowery’s begrimed façades, not unlike that behind the ruined faces of its inhabitants. As Alice Sparberg Alexiou puts it in Devil’s Mile: The Rich, Gritty History of the Bowery, “Almost every building and lot has a good story in its history.” No matter the ups and downs, the soulful history of the place “is always present and somebody will always find it.”

Walt Whitman sang of the Bowery as “racy of the East River,” its denizens embodying “a picturesque freedom of looks and manners, with a rude good nature and restless movement.” A century later, his spiritual descendant Allen Ginsberg celebrated those “who ate the lamb stew of the imagination and digested the crab at the muddy bottom of the rivers of Bowery.”

Charles Hurstwood, ill-fated lover of Theodore Dreiser’s Caroline Meeber (Sister Carrie), ended as a flophouse suicide, his last words a cri de coeur shared by generations of the down-and-out: “What’s the use?” Real-life Stephen Foster, the progenitor of American popular music, dubbed by Alexiou “the poignant bard of the Bowery,” died cold and alone in the attic of a hotel, his throat slit either by accident or design.

Minstrelsy, “with its edgy and shame-inducing racial content,” grew to a national rage after the Virginia Minstrels’ 1843 debut at the Bowery Theater. Israel Beline (a.k.a. Irving Berlin) remembered his turn-of-the-century “musical education on the Bowery” among “real tough people.” At century’s end, CBGB’s, a cave-like bar on the ground floor of a flophouse, hosted punk pioneers like the Ramones and Patti Smith, and became the hothouse for the re-blossoming of rock ’n’ roll’s rebellious soul.

America began as much on the Bowery as at Jamestown and Plymouth Rock. Immigrants of all shades and persuasions began here. Industrious Dutch, conquering English, enslaved Africans, famished Irish, fleeing Chinese, penniless Italians, persecuted Jews. The history that Alexiou relates in her enlightening, engrossing book is overwhelming in its richness. She writes without exaggeration that “the Bowery was more than a street. It was, is, a place that transcends time.”

The Bowery was the seed and stem from which the Big Apple grew. In the beginning were the Dutch who founded New Amsterdam in 1625. Governor Peter Stuyvesant established his bouwerij (farm) beside a Native American footpath that soon became a bustling lane. Freed slaves settled in nearby swampland, which came to be called “Negros Land.” Native Americans were swept away by smallpox and military force. As property values rose, the ex-slaves were displaced.

The Dutch lost control of the colony to the British. They renamed it in honor of the Duke of York, who became James II and shortly after was kicked off the throne. Before the British were tossed out by their colonial subjects, they turned Bowery Lane into “the southernmost leg of a comprehensive postal highway to link New York and Boston.” Loyalist families like the Delanceys fled and left behind nothing but a street name.

The great scheme of New York real estate, which would one day propel an odious huckster to the presidency, was hatched here. Fittingly enough, the art of the deal originated in butchery and skinning. Heinrich Ashdore came to New York from Walldorf, Germany, with Hessian mercenaries employed by George III. After his boss was booted, Ashdore reinvented himself as Henry Astor, set up shop on the Bowery, and grew wealthy as a purveyor of fresh meat. His brother Johann Jakob (John Jacob) followed him to New York and made a fortune in the fur trade.

Henry and John had a fraternal relationship of the Cain-and-Abel kind. They invested heavily in real estate, competing with one another as they bought and divided Bowery lots, and squeezed larger and larger profits from tradesmen and small-business owners. When John opened a downtown theater, Henry bested him with the capacious Bowery Theater, which boasted a capacity of three thousand seats. Alexiou identifies the Bowery as “the very place where American popular culture was starting to emerge.”

The street itself was a theater. Young, American-born, working-class males made it their headquarters. The Bowery b’hoys, as they came to be called, featured their own haircut and outfit, as well as a trademark slang and strut. Nativist embodiments of the rude, boisterous, assertive (to some, threatening) spirit of Jacksonian democracy, they brought to life the edgy urban cool adapted by street dudes from Damon Runyon’s guys and dolls to today’s hip-hop artists.

The Bowery was a great American frontier, the Wild East as opposed to the Wild West. The unwashed and unfettered roamed here, those who reveled in the American Dream and those defeated by it. Here, the rules and proprieties of sober, God-fearing society ended and the country of anything goes began. Its combination of danger and diversion was an irresistible draw that, for some, didn’t always end well. Cautioned one music hall ditty: “They say such things and do strange things / On the Bowery! The Bowery! / I’ll never go there anymore.”

The Bowery’s raison d’être went beyond “the pursuit of happiness” to an open-ended hunt for fun. Before Las Vegas, gambling dens were rampant. Yiddish theater prospered. Dime museums appealed to fans of the outré and offbeat. It was where gay men from across the social spectrum found a haven, and where Gotham’s 1 percent went slumming among the no percent. “Sex on the Bowery,” Alexiou allows, “went at bargain rates.”

Reformers loathed the Bowery not only for its promiscuity but for its politics, especially the Irish variety perfected by Tammany Hall. Reverend Charles Parkhurst made an anonymous tour of the dives and brothels of the area, demanding at each stop to be shown something worse, until he emerged to lead a citywide crusade against lust, drink, and Tammany. He was convinced that if the country rid itself “of rum and the Irish, it could close three-quarters of its poorhouses and tear down half its prisons.”

Here, the rules and proprieties of sober, God-fearing society ended and the country of anything goes began. Its combination of danger and diversion was an irresistible draw
sharetweet

Presiding over Bowery politics was its undisputed king, Big Tim Sullivan. King though he was, he treated voters as equals, not subjects. Long after the Irish had ceased to be a numerical majority, Sullivan earned the loyalty of Jews and Italians. In the days before a social safety net, he provided everything from jobs and meals to children’s shoes. If he profited handsomely from politics, which he most certainly did, Alexiou credits that “he gave back more than he took by looking out for his constituents.”

After Sullivan came the deluge. World War I deposited growing numbers of unemployed veterans, many physically or mentally scarred, who filled up the missions and cheap rooms. Prohibition closed the saloons, which along with alcohol offered companionship and basic amenities. “Without the saloons,” Alexiou laments, “the bums were lost.” Rot-gut whiskey and chemical wines pushed by illegal dives left some blind or dead. New York’s most historic, vibrant, freewheeling street descended into a byway of the broken and abandoned.

The Bowery bum, a synonym for a hopeless, panhandling, transient alcoholic, found a sympathetic chronicler in filmmaker Lionel Rogosin. On the Bowery featured two genuine Bowery denizens, Gorman Hendricks and Ray Sayler. It was shot in 1956 for $60,000 and used a skeletally scripted plot that followed their three-day interactions. An early example of cinéma vérité, it captured the pathos of men whose days revolved around finding the next drink and a place to sleep. Sayler’s good looks and natural style earned him a shot at an acting career, but he chose to return to points unknown.

Eventually the El that had long shackled the Bowery sky came down, but daylight only added to the desolation. It was tagged for “urban renewal” (i.e., demolition) by power broker Robert Moses, who swept aside acres of the city to erect highways and high-rises. Moses’s reign ended before he got to bulldoze the Bowery, but crime and drugs and the city’s economic decline left it a bleak and dangerous place.

Alexiou has it exactly right when she concludes that in New York “every story begins or ends, with real estate.” The next chapter in the saga of the Bowery pits the dogged resistance of preservationists and a dwindling number of longtime residents against the mounting advance of speculators, developers, and the new urban gentry. Once more the future of “New York’s quirky and fabled street” is in play.

Alexiou’s gem of a historical Baedeker is not just for everyone who cares about the Bowery but also for anyone interested in the play of change and continuity—of memory and history—that gives a city its soul. Hers is a tribute, not a lament. She records the Bowery’s multiple manifestations as cultural playground, moral underground, and urban wasteland. She gives us what was and is. She never loses hope. “The Bowery! The Bowery! / They say such things and they do strange things / On the Bowery! The Bowery!”