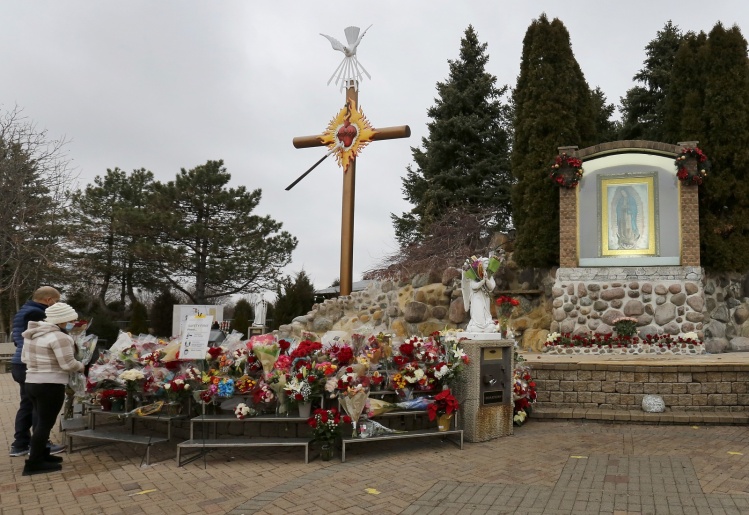 The Shrine of Our Lady of Guadalupe in Des Plaines, Illinois (CNS photo/Karen Callaway, Chicago Catholic)

Catholics of Latino origin have often been invisible in American society, even to other American Catholics. Spanish-speaking Catholics have resided in this land since before the United States was founded, and many neighborhoods and parishes have been shaped and reshaped by their contributions. Yet they have been overlooked in most historical accounts of significant events in U.S. history. Chicago Católico: Making Catholic Parishes Mexican—the fruit of eighteen years’ worth of research by Deborah E. Kanter—helps correct this omission by documenting the contribution of Mexican-American Catholics to one great American city.

Catholic immigrants from Mexico found a place of refuge in their new Chicago parishes, which provided not only the sacraments but also spaces for social and community functions. These were the anchors of their new neighborhoods: Near West Side, South Chicago, Pilsen. The parishes had once been home to other immigrant communities—to Polish, Irish, and German Catholics who had arrived in this country decades earlier and had since been assimilated into mainstream American culture.

Chicago Católico is grounded in parish documents—including bulletins, annual reports, letters, parochial records, and parish newspapers—but it also makes good use of recorded oral histories. Kanter delves into the everyday details of how Mexican immigrants and their offspring made parishes their own. It relates the experiences of women who organized las guadalupanas, of religious teachers and school children, of soldiers fighting abroad while remaining closely connected to home through the mail. We read about Corporal Teófilo Arevalo opening a package from home as his unit made its way to Germany during World War II. Inside was a copy of the St. Francis Crier, a twelve-page newspaper published by his parish back in Chicago. It brought him news of friends serving throughout the world: Pfc. Manuel Martinez, Cpl. Sixto Zaragoza, and Pvt. Joseph Reyes.

Kanter’s book is divided into five chapters that follow Mexican migration and integration from the 1920s through the 1970s. She focuses on several Chicago parishes, tracking their transformation through this period of half a century. One chapter is devoted to migration between 1920 and 1939, which often took place in stages—from Mexico to Texas and finally to Chicago. The reader follows Elidia Barroso and her family as they cross the U.S.-Mexico border in 1916. Crossing the border was then a simple process for the educated middle-class traveler. Elidia and her family wouldn’t have encountered Customs and Border Patrol (an agency created in 1924) at militarized entry points. As Kanter writes, even in the 1930s, “Mexicans, if they could pass the literacy test and pay the eight-dollar head tax, easily entered the United States.” Today, of course, they would need a visa or an asylum claim, and both of these have become increasingly hard to come by in recent years.

In many ways, border states like Texas still felt a lot like home. But economic pressure forced Mexican immigrants to move north.
sharetweet

When Mexicans first arrived in Texas, they found parishes like San Fernando Cathedral, which welcomed and promoted Mexican cultural and religious practices. In many ways, border states like Texas still felt a lot like home. But economic pressure forced Mexican immigrants to move north into parts of the country that may have been less culturally congenial, but offered jobs with higher pay or more security. The labor shortages in the Midwest after World War I made it easy for enganchistas (contractors) to recruit workers from Texas to Chicago.

Mexican migrants worked on the railroads from Kansas to New York and on farms from Nebraska to Michigan. During that period, Illinois became the fourth most common destination for Mexican nationals. Kanter braids together the story of Mexican migration with the changing ministry of the Spanish-speaking Claretian order. Countless Mexican families like Elidia Barroso’s had first encountered Claretian missionaries in Texas, only to encounter them again in Chicago. The Claretians followed the migrants wherever they went, helping integrate Mexican and Mexican-American families into parishes and communities across the country.

This wasn’t always easy. Noting the growth of the Mexican population in Chicago, the Claretians had first offered their services to Archbishop George Mundelein in 1918. Initially, there was no response. Finally, in 1924, they took over Our Lady of Guadalupe Church in South Chicago, and in 1927 became St. Francis of Assisi’s administrators. The same year, an Our Lady of Guadalupe Shrine was added to the sanctuary of St. Francis—physical proof that Mexican Catholicism was now an important part of the parish. The newcomers were not just temporary visitors; they were at home. In the decades to come St. Francis of Assisi would become known as “La Catedral Mexicana,” a transformation due in no small part to the attention and perseverance of the Claretians.

In the 1950s, St. Francis of Assisi not only provided the Mass in Spanish and a place where Mexican immigrants could practice their popular devotions together; it also served as a base for important social services, and as a hub for the growing Mexican community’s larger culture. Nearby the church were Mexican restaurants, bookstores, grocery stores, a theater, the parochial school, and the recently established Catholic Youth Organization gym.

In Chicago, Mexican families found what Kanter calls an “immigrant-ready infrastructure” that provided jobs, housing, and schools (both public and parochial). One neighborhood in Chicago, Near West Side, emerged as one of the two main nodes of activity for the Mexican immigrant community. In the mid-nineteenth century, the same neighborhood had welcomed German, Irish, and Italian immigrants. It was close to the factories and downtown hotels where many of them worked. The Illinois Central Freight House was less than a mile away.

The transition within such neighborhoods from European to Mexican immigrant communities took the better part of a century; in some respects, it is still underway. Kanter cites John T. McGreevy’s observation that the long, slow assimilation of these communities into American society—both facilitated and inhibited by Catholic institutions—is “the central drama of the twentieth century U.S. Catholic history.” But even as Mexican immigrants and their descendants have been integrated into American culture, the American parishes they joined have assimilated Mexican piety and culture. By documenting the history of this mutual influence over the course of a century in one Midwestern city, Kanter’s book reminds us that Mexican Catholicism has been an important part of U.S. Catholicism for much longer than many people realize, and not only near the border.

Milton Javier Bravo is the Associate Publisher for Commonweal and Theology instructor at St. John's University