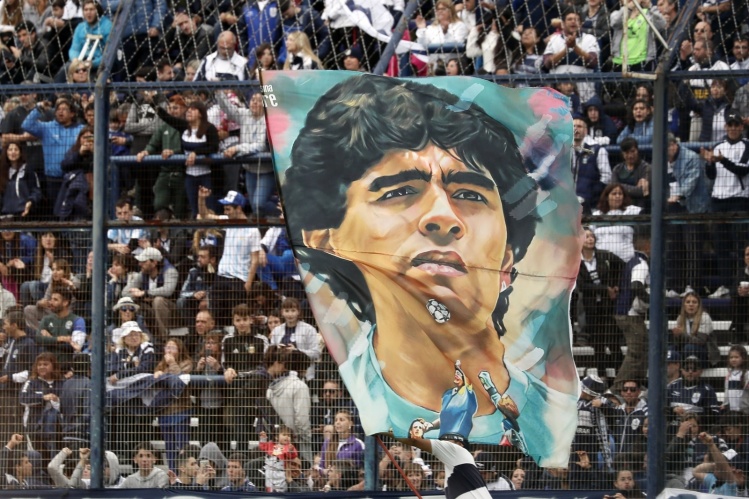 Diego Armando Maradona was loved by millions of people. The global outpouring of grief that followed his death in November made this clear even to those who had never paid him, or his sport, much attention. The Argentine soccer legend—who died at age sixty, from heart failure—was of course adored in his homeland. He was loved in Naples, whose team he led to its first-ever national championships, in the teeth of scorn from the southern city’s wealthier northern rivals. (During matches, fans from the other team would taunt the napoletani with banners reading “WASH YOURSELVES” and “CHOLERA SUFFERERS.” Maradona, who was born in Villa Fiorito, a slum near Buenos Aires, found it easy to side with the underdogs from Naples.) Maradona was also loved by anyone who loves the game, even by South Americans from other countries who might root against Argentina—such as my normally talkative seventy-year-old uncle, who clammed up, unable to express his awe, when conversation took us back to Maradona’s triumph in the 1986 World Cup, a performance that had to be seen to be believed.

Maradona’s fans had a slogan: Not for what you did with your life, but what you did with ours. He made many mistakes with his life. There are reports of sordid incidents involving drugs and prostitutes. He was accused twice of domestic abuse. He delayed admitting to the paternity of several of his children. But his fans focused on his achievements. Those are what made people call Maradona a hero, even a genius. His greatest goal, scored in the 1986 World Cup, produced a memorable call from the announcer: “Genio, genio, genio, ta-ta-ta, goooool!”

Asif Kapadia’s 2019 documentary, Diego Maradona, which focuses on the player’s time at SSC Napoli, includes a fascinating scene in which Maradona describes his gift. The transition to the Italian league from the Argentine and Spanish leagues where he had played before posed new challenges for the young Maradona. “Italian football was played at a different rhythm and the football was rougher. I had to adapt and learn to play at a different speed. I sped up my timing in order to get into [the] play. If I went one way abandoning my technique, so that I could run faster, I would’ve been useless. And if I went top-speed…my technique wouldn’t have worked. I had to find a balance, which wasn’t easy.” More than any physical advantage, this athletic intelligence was essential to Maradona’s talent. As Dutch legend Johan Cruyff once said, “Football is a game you play with your brain.”

Under Maradona’s leadership, SSC Napoli won two national championships and a European title. He was captain of a strong Argentine national squad in the 1986 World Cup, where he scored five goals and made five assists as he led the team to victory against Germany in the final. Two of those goals—against England in the quarterfinals and Belgium in the semifinals—are considered among the most beautiful in the history of the sport. Four years later, while still recovering from an ankle injury, he led Argentina to another World Cup final, which they lost to Germany. But Maradona’s legacy was secure. Moreover, he achieved all this in a time when star players routinely suffered from kicks, scrapes, and other dirty play, before referees became more attentive and well before instant replay became a regular part of the sport. “Genius,” Wittgenstein wrote, “is talent exercised with courage.” Maradona was, in this sense at least, a genius.

To call someone a genius is to elevate and possibly endanger that person.
sharetweet

To call someone a genius is to elevate and possibly endanger that person. It is to raise him above the community that nurtured his genius; the danger lies in alienating him from that community. In a recent essay for the Point, the philosopher Agnes Callard argues that we classify people as geniuses “to serve our own fantasies of independence.” The genius is allowed to exist in a special realm above the common folk, while his faults are recast as “charming idiosyncrasies.” “Is there really any person,” Callard asks, “whose mind is so alien that she flourishes by being set ‘free’ from the normative expectations that constitute community membership for the rest of us?”

Certainly, Maradona suffered from being “freed” from such expectations. Kapadia’s film documents the managed debauchery during Maradona’s time in Naples, enabled by powerful people who supplied him with illegal comforts and sheltered him from police scrutiny. But Maradona’s privileges evaporated after he played as a member of Argentina’s national team against Italy in the 1990 World Cup semifinal. That World Cup was hosted by Italy, and for the national team to lose on home soil was heartbreaking enough. But to lose at home against Maradona and in the Naples stadium—that was too much for certain powerful people to handle. (It didn’t help that Maradona roiled ancient antipathies before the match by asking the napoletani to root for Argentina, saying that northern Italy rejects them anyway.) After the 1990 World Cup, the powers that be stopped looking the other way when Maradona broke the rules. His fall from grace soon followed: an arrest for drug possession, a trial, rehab, health problems.

One community that could have helped him was the Catholic Church. Maradona’s faith was like a song whose meaning he remembered even if he forgot some of the words. You saw it when he clutched his rosary while pacing the sidelines as the Argentina coach in the 2010 World Cup, or whenever he publicly thanked God for the unmerited gift of his talent. It was there when he denounced the gilded trappings of FIFA, and when he challenged the pope to do more to help the poor: “Sell the ceilings! Do something!” But even here, his reputation as a genius seemed to prevent Maradona from simply belonging, in a humble and healthy way, to a community. It’s not easy to be devout when one is the object of so much quasi-religious devotion. Many fans still call Maradona “god.”

One of Maradona’s finest hours was also one where he broke the rules. But he did so for the sake of the community closest to him: his country. Argentina’s victory over England in the 1986 World Cup is considered to be one of the great matches in soccer history. This is due in part to the magic of Maradona’s second goal. Maradona received the ball at midfield, then slalomed past half the English team in a calibrated, prancing dribble. He rounded the goalkeeper and scored just as he was losing his balance, falling to his right side. Then he got up and sprinted toward the stands, where he celebrated with his people. But this triumph will forever be associated with Maradona’s notorious “Hand of God” goal that came four minutes earlier. The ball spiked up into the air, and as it came back down, both Peter Shilton, the English goalkeeper, and Maradona jumped up to meet it. Shilton was allowed to use his hands; Maradona was not. Yet Maradona punched the ball into the net, above Shilton’s raised fist. The referees saw nothing.

Historical context makes this story something more than an alarming instance of cheating (which it was). The match took place four years after the 1982 Falklands War, which pitted Argentina against the United Kingdom. More than six hundred Argentine soldiers and two hundred British soldiers died. Argentina lost the war, and the 1986 match became a chance to seek vindication. Maradona was wryly appealing to divine justice when he attributed his illegal goal to “the hand of God.” It was, of course, a theological error to imply that God took sides in a military dispute over a south Atlantic archipelago. But for most Argentines, victory over England was a moment of catharsis. As ESPN commentator Gabriele Marcotti has noted, apart from the Falklands conflict, victory over England by a South American nation also meant the victory of an upstart nation over the country that invented soccer—the same country whose team refused to travel to South America for the first World Cup in 1930. In this match, Maradona and Argentina had defeated an empire. Maradona’s support for left-wing politicians and his Che Guevara tattoo testify to this anti-imperialist spirit.

Maradona had the self-awareness to acknowledge the costs of his transgressions. He regretted his drug use, weeping during a 2004 post-rehab television interview. In 2001, he spoke before fans in the Bombonera, the Boca Juniors stadium, during an event honoring his career. “I made mistakes and I paid for them,” he said. Then he added this: “la pelota no se mancha” (“the ball does not get dirty”). The game itself and the joy it creates are innocent. It is possible Maradona never spoke a more beautiful sentence.

The desire to actualize ourselves as individuals sits uneasily alongside the longing for membership in a stable community.
sharetweet

After his death, SSC Napoli announced that it would rename its stadium after Maradona—the quarrel between player and city was by now long forgotten. In Argentina, Maradona’s wake was held in the Casa Rosada, the presidential palace. Ignoring any pandemic precautions, thousands of people crammed together and even climbed the perimeter fence to pay their respects. Police broke up a few disturbances in the crowd.

All this adulation helped people forget that Maradona’s last years had been difficult. “It is characteristic of genius to warrant the hyper-tolerance—and utter isolation—of being put on a pedestal and surrounded with a supportive entourage of yes-men,” Callard writes. In recent years, unflattering iPhone videos of an intoxicated and helpless Maradona, flanked by admirers, spread through social media. Once, ESPN attempted to interview him after a match in Culiacán, Mexico, where he had been hired to coach Dorados de Sinaloa, a second-division team. Confused and stuttering, after thirty seconds Maradona gave up and turned away from the ESPN reporters, without managing to utter a single intelligible word. At least the Netflix docuseries about his time in Culiacán, Maradona in Mexico, offers a balanced picture of the man: his aching, aging physique; his old-man vanity; his care for his players; his undying passion for the game.

Maradona was one of a kind, but he embodied a familiar modern tension. The desire to actualize ourselves as individuals sits uneasily alongside the longing for membership in a stable community. Maradona never forgot his origins in Villa Fiorito; he had the rootedness and charisma of someone who, in the Middle Ages, might have led a peasant revolt. But he was also a globetrotting cosmopolitan who became a local hero on three different continents. We might imagine a world where people can reconcile these contradictions and develop their talents in peace, free from the illusions of “genius.” But that world doesn’t exist yet. Maradona was the brilliant, troubled product of the world as we know it, where illusion and talent are all too often an inseparable pair.

Santiago Ramos is a freelance journalist and a philosophy professor at Rockhurst University. He was the 2020 John Garvey Writing Fellow at Commonweal. 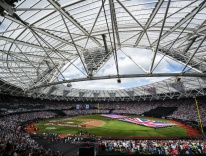 Does Baseball Have a Future in Europe?