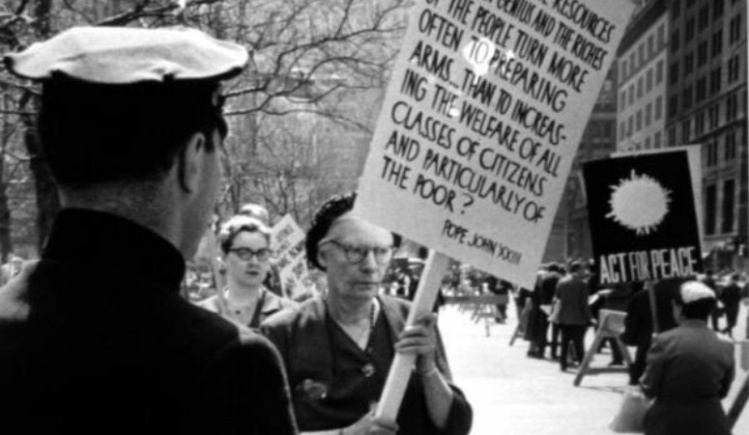 On the same day that the unemployed hunger marchers were being ushered out of the city of Washington by the entire police force of the capital, with machine-guns, tear-gas bombs and nauseating gas bombs, a delegation of 250 farmers from twenty-six states were being welcomed to the city with every show of courtesy.

And on the same day too, machine-guns and tear-gas were being used out in Elkton, Wisconsin, to evict a farmer, his wife and two children from a farm which they were defending with rifles and shotguns. The home of the farmer, Max Cichon, had been sold at a foreclosure last August, and he had refused to move. It is evictions such as these that the farmers came to protest.

“We are not coming to Congress with our hats in our hands asking them to please do something for us,” one of the delegates said. “We are going to demand aid, and if we don't get it, we are going to resort to united and direct action. We are drawing up a declaration of independence just as was done back in 1776. Now we are fighting not one king, but many. We have to fight the banks, the lumber trusts, the insurance companies, the food trusts, the railroads and the milk trusts. The old American army fought without uniforms and without proper arms, and they were finally victorious. We are going to fight too.”

The farmers’ gathering was a happening of far more revolutionary significance than that of the hunger marchers. The hunger marchers were recruited by Communist leaders from the ranks of the unemployed, from union workers, from the textile mills, the mines and the factories. The majority of them not Communists, they had been trained for the past month or so in Communist language and tactics, and the demands they presented were but temporary panaceas for the evils of the depression. They were people who had lost all, who had nothing “but their chains to lose” as the Russian slogan has it. But the farmers, who have their farms and their living which they make on the farms to lose, are far more keen for the fight, and are far more apt to resort to immediate violence to gain their demands.

The conference met for four days, from December 7-11. The farmers present were delegates from their counties and states, elected either by their neighborhoods or by some organization such as the Farmers’ Holiday Association, the Farmers’ Union, the United Farmers’ League, etc. Many of the men are former members of the old Non-Partizan League. The United Farmers’ League is an organization with Communist affiliations, but it was estimated that not more than 5 percent of the farmers at the conference came from this organization.

I talked with one such representative, Selmen Espeland of Montana. All he thought of his organization was that it had specific demands which tallied with those of the more militant members of the rank and file farmers of the Farmers’ Holiday Association. He said that he would join with any organization which was fighting for those demands. An emergency moratorium and a cessation of evictions and forced sales were the two measures which he thought the most important. And in the final statement read before Congress, the demands of the farmers went even farther. They embraced a cancellation of all “mortgages, interest, Food and Seed Loans and debts for supplies and furnishing for farmers whose volume of production and economic unit has always been too small to carry the debt of land and support the family at a minimum health standard (marginal farmers, share croppers and others).”

The moratorium was for all farmers “whose volume of production has until recently sustained the farm family at a decent standard of living.”

In the demand that there shall be no more evictions from the farms, the statement reads, “If our duly elected national representatives fail as did the local, county and state authorities, then we pledge ourselves to protect our fellow farmers from suffering and their families from social disintegration by our united action.”

From the floor of the union hall where the farmers met they did not hesitate to say what form that united action would take. Stump farmers from Minnesota, berry farmers from the Dakotas, maple sugar farmers from New Hampshire, cotton share croppers from Alabama, dairy farmers from Nebraska, corn, wheat, hog farmers—all dirt farmers—pledged themselves to go to the aid of any farmer in their county who was being menaced with dispossession.

“I'll defend my farm with shotguns,” one farmer after another said. “And before I'm killed, I'll burn my crops, burn my house and poison my cattle. The farm is mine and I'll fight for it!”

These farmers are American radicals in the truest sense of the word. The majority of them, from the Farmers’ Holiday Association, are men past forty, substantial in their home communities, church members, and up to the last few years not interested in social action. Those from Madison County, Nebraska, where in September of this year the resolution was taken to make the march on Washington, are Americans of Scandinavian, German or American descent, who have been Republicans for generations and who this year for the first time voted the Democratic ticket. In realizing their own predicament, they have begun to realize the plight of the industrial masses, and they do not hesitate to pledge themselves also to "united action" in the case of strikes and labor troubles in the towns near their farms, and this action in the form of mass gatherings and moral pressure has been brought to bear in the mining regions of Minnesota. The farmers have also cooperated with the striking miners in Illinois.

They cite the Golden Rule as the immediate solution of their difficulties but they hard-headedly state that “united militant action” will probably be necessary.

“We aim to avoid bloodshed,” Anthony Rosenberg, the chairman of the convention, said. Rosenberg is a tall grizzled farmer of German descent (neither a Jew nor a New York radical, as has been suggested in reference to his name). “We come here to seek emergency legislation. But if nothing is done for us we will act on the conviction that the rights of the individual are above all man-made laws. The farmers’ organizations are all endorsing our policy of direct action. Since September, after the governors’ convention in Sioux City, Iowa, failed to do anything for us, we have organized the farmers in Nebraska so that now 9,000 of them belong to the Farmers' Holiday Association.”

Alfred Tiala belongs to a farm organization in Minnesota. Dressed in khaki leggings, corduroy trousers and a leather jacket, he told how he had come across country with the hunger marchers. “We were both on our way to Washington and we joined forces. They are industrial workers and we are farmers, and our cause is the same. They tell us here in Washington to raise less crops-there is all this talk of surplus. And then we go through cities and see soup lines and starvation and realize that at home we have pigs we can't sell, wool we can't market and crops rotting in the ground. We have got to find some way to get this food to these starving workers.”

Tiala's father and relatives, he said, worked on the Mesaba iron range, and when they were blacklisted years ago for joining the union, they hired out as farm hands, as many of the iron miners did. By heartbreaking work and frugality they saved until they bought their own farms. Now most of them have been dispossessed and the rest of them are subject to eviction shortly. Not far away from the industrial class themselves, they have sympathy with the city workers and bring in their supplies to swell the relief stores of the cities nearby.

This same relief work went on in southern Illinois during the strike this fall in the coal regions. The striking miners went out to the farms and helped bring in the crops and received payment in kind, which they put into a common fund of food for the needy in their mining towns.

Mrs. Ella Chase, a maple sugar farmer from New Hampshire, got up and made a stirring speech, her voice trembling with excitement.

“I worked for a week, cooking food for my five children so that I could come to Washington with my husband,” she said. "They asked me why I was going. I told them I was going to fight so that they could live. I've been married for twenty years and my husband and I have worked from sixteen to twenty hours a day, and now we are in danger of being evicted, sold out. We've belonged to the grange and to the farm bureaus. We've joined all organizations trying to better the lot of the farmer. But this is the first time the farmers have united to actually fight. We've had a depression for ten years, we farmers, and we can't hold out. So we have to cooperate and fight evictions.”

At an experience meeting men with names like Gore, Oliver, McCabe, Strong, all from the West, told of conditions in their communities. Philip Smith of Pennsylvania told how his forefathers had received their land by grant from Penn's sons. They were Americans all, and they professed themselves to be the real lovers of their country.

“The bankers, the insurance men, the railroad men,—these are the real traitors,” they said.

The demands which were drawn up and presented to Congress on the third day of the convention included, in addition to those mentioned before, $500,000,000 cash relief; food products needed for relief of the city workers to be purchased from the farmers; the transportation of relief supplies to be regulated by the federal government; a price-regulating body controlled by actual consumers and producers to make adjustment of prices; the defeat of any legislation based on the theory of “surplus” production, such as the Allotment Plan.