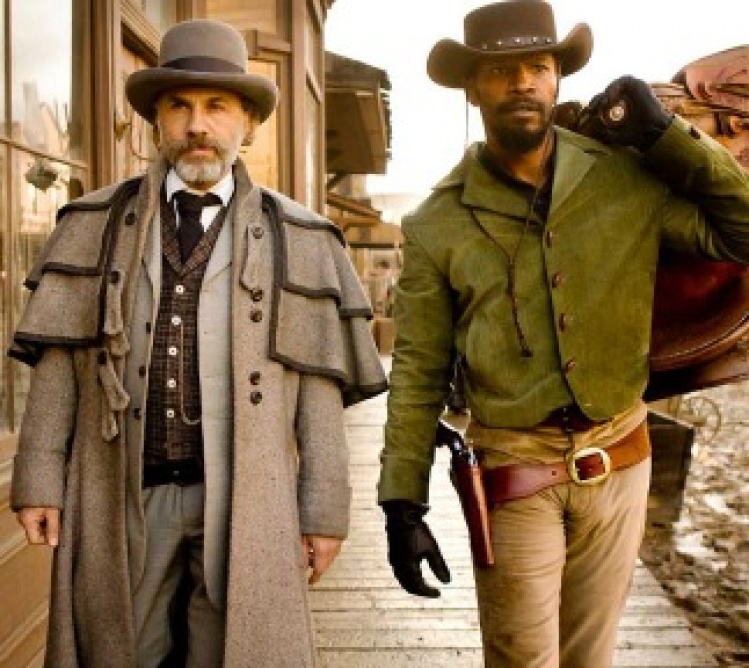 The director Quentin Tarantino loves genre, the grungier the better. His first three films, Reservoir Dogs, Pulp Fiction, and Jackie Brown, are gangster movies—or, rather, gangster mutants, for their creator relaxed conventions for detours into gallows humor, pop-culture disquisitions, horrific accidents, surprisingly tender romantic interludes, and Hemingway-esque trials of male honor. In fact, it is these very detours that make the movies work. Genre sets up expectations, and Tarantino reversed or exploded expectations to expand his narratives, complicate his characters, and keep his audience in a gratifying state of anxiety.

Since then, however, Tarantino has seemed more interested in decorating conventions than in transcending them. The Kill Bill films are nothing more than visually glitzed-up martial-arts junk. Deathproof (the second half of the Grindhouse project) comprises two excellent car chases and forty-five minutes of pseudo-tough yapping among valley girls. Inglourious Basterds (sic), a behind-enemy-lines thriller set during World War II, is full of dramatic potential, but the director wastes it all for the sake of a last-reel bloodbath. Though all these movies have Tarantino’s customary comic-book garishness, there is a huge difference between the early and later work: the first three are populated by characters with interesting quirks, who always behave a little better or worse than you expect, thus evoking a sort of wary sympathy for them. Your heart lifts (a bit) when Pulp Fiction’s hit man Jules finally spares someone’s life, and your heart sinks (a bit) when his partner Vincent succumbs to the violence he lived by. In the last four films, the characters exist only as hooks on which to hang mostly violent situations and are of no interest in themselves except as potential corpses, or corpse-makers.

Tarantino’s new film, Django Unchained, at first seems content to be a deluxe version of the old spaghetti westerns of the 1960s and ’70s. Even the opening credits flash across the screen in the big red block lettering characteristic of the genre, and the music blares out with all the steel-string brio of an Ennio Morricone score (though the soundtrack is in fact another of Tarantino’s expertly curated collections of pop songs).

The plot has no trouble providing Tarantino’s signature body count. In the Texas of 1858 a German dentist and bounty hunter, Dr. Schultz (German only because the director wanted to employ Christoph Waltz again? a dentist because Tarantino was thinking of Doc Holliday?), frees a slave named Django from a coffle by slaughtering the slave drivers. He needs Django to identify three of his former overseers, who are also wanted by the law and have a big price on their heads. In return, the Doc will help Django reunite with his wife, Broomhilda (sic!), who has been sold off to a Mississippi plantation. (And yes, Schultz does compare Django to a Siegfried questing for the Wag-nerian maiden of his dreams; Tarantino’s pulp world doesn’t exclude highbrow pretentiousness.) It takes only a few days for Schultz to turn the ex-slave into a lightning-fast gunslinger, and off they go.

The setup contains a thousand improbabilities, but why bother to list them? The entire story takes place in movieland, the only country Tarantino knows. Viewers who enjoy Tarantino movies always accept a lot of nonsense in order to enjoy zingy patter, artful compositions, hypertense situations, and good acting. But this film’s first half—the bounty hunting prior to the quest for Broomhilda—may leave some fans feeling bilked. The dialogue lacks Tarantino’s usual snap and crackle; the hip-hop rhythms of his characters’ speech sound out of place under southwestern skies. The compositions now seem a bit too artful, even arty, especially the groupings of graceful black women on a plantation’s lawns and fields, all too reminiscent of Seurat’s beach strollers—this daintiness is hardly the way to depict the sufferings of slaves. As for the acting, Waltz delivers his customary suavity but I was never convinced that Schultz was a character rather than just a notion. The superb Jamie Foxx, so compelling in Ray and Collateral (and one of the best recent guest-hosts on Saturday Night Live), is too subdued here, too childlike, too lacking in the inner fire that would prepare us for the delight he takes in destroying his wife’s victimizers. The supporting players deliver redneck-monster-racist clichés, unavoidable since they’re playing not people but targets.

So much for the first half of Django Unchained. Then the movie becomes both more interesting and more repellent. After slaughtering a large number of criminals and collecting the rewards, the bounty hunters, disguised as fight promoters looking to buy black combatants, head out for Mississippi with plans to rescue Broomhilda. But when they are forced at gunpoint to buy her at an exorbitant price, Schultz does something so idiotic (and completely at odds with his slyboots character) that it leads to a massacre, which in turn creates further complications that make this film about twenty minutes too long. So why is this chaotic second half more interesting than the first?

For one thing, the action moves indoors, as the disguised bounty hunters match wits with the plantation owner, Candie, played by Leonardo DiCaprio as a sort of silky Mafioso with a southern accent. The cat-and-mouse negotiations leading up to the massacre nudge the movie away from the spaghetti western genre and toward the kind of gangster atmosphere with which Tarantino is more comfortable. You can feel the movie being recharged as the antagonists circle each other.

But, more important, it’s at this point that the offensive, implausible, but fascinating character of Stephen, Candie’s head slave and butler, is introduced. Some may wonder why Samuel L. Jackson, possibly the greatest American film actor alive, signed on for this. Was it so politically incorrect that he couldn’t resist? Let it be said that his execution is magnificent and deserves the Oscar nomination for best supporting actor that Waltz received. But great as Jackson’s performance is, the character raises questions about Tarantino himself. Jackson’s makeup—the darkening of his already dark skin, the tufted white eyebrows—recalls “Uncle Ben,” a persona that, like Aunt Jemima, is associated with Uncle Tom–ism. And on his first appearance, Jackson does indeed “Tom” away: truckling, joshing, shuffling, and cringing before his smug white master while snarling at the now duded-up and insolent Django as an “uppity nigger.” At first we can take Stephen as the pitiful product of a brutal institution, a man so twisted by his masters that he vents his rage not on them but on his fellow slaves. But wait, there’s worse to come.

Stephen begs a private audience with his master. Cut to the library. Both men are seated. Candie’s lordliness is gone. He leans forward pensively, attentively, even humbly, to listen to Stephen. And Stephen’s subservience is gone. Cool, masterful, even arrogant, he leans back at ease, drinking his master’s wine and dispensing his insights into what the bounty hunters are really up to. Who is the real master here? And what is Quentin Tarantino up to? Is Django taking place in an alternate universe, like that of Inglourous Basterds (in which Hitler was assassinated by Jewish soldiers)? Is this just dramatic symmetry at work, the heroic white-black duo of Schultz and Django countered by the villainous white-black duo of Candie and Stephen? But by the time Django reaches its climax, both Schultz and Candie have withdrawn from view. As in most action flicks, the hero’s last bullet is reserved for Villain Number One, not his sidekick, and here it blasts a hole in the chest of Stephen, the Uncle Tom as mastermind.

Imagine a Holocaust film in which a death-camp capo—a Jew supervising and often mistreating other Jews for the sake of his own survival but perhaps also theirs—is portrayed as more evil than the Nazi camp commander. Hard to imagine, right? But who, before Quentin Tarantino, could have imagined Stephen in Django Unchained? This may be the most crazed movie about race and slavery since Birth of a Nation.