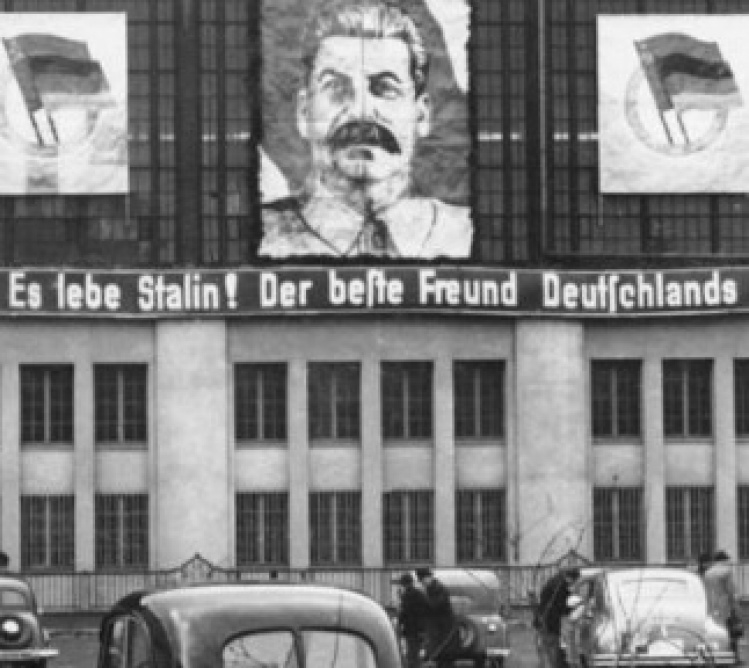 Karl Marx was wrong: Wars, not revolutions, are “the locomotives of history.” Like a devastating storm, war sweeps away the people, institutions, and attitudes that stand in its path, and on this wreckage-strewn landscape, war creates opportunities for the leaders, organizations, and ideas that promise to master its destructive fury. Nowhere was the interplay of war’s destructive and creative energies more apparent than in Eastern Europe during the first half of the twentieth century.

The First World War destroyed the German, Austrian, and Russian empires and in their place created a new configuration of independent states stretching from the Baltic to the Adriatic. Politically fragile, economically weak, and ethnically divided, these states were swiftly caught up in the maelstrom of the Second World War, sometimes as Nazi Germany’s victims, sometimes as its allies, and often as one and then the other. In 1944, Soviet forces began to take control of the ruins left in the wake of the German army’s slow and painful retreat westward toward the Reich.

The “crushing of Eastern Europe,” therefore, was first and foremost a product of how and where the war was fought. Applebaum begins her splendid new book with a moving account of the conflict’s final months, which reminds us of the tragic contrast in the war’s impact on Western and Eastern Europe. In France, 590,000 people were killed by the war; in Poland, as many as 5.5 million died, 20 percent of the population. Paris was damaged in the fighting, but remained largely intact; Warsaw was reduced to rubble. In Western Europe most prewar regimes either survived or were restored after 1945; in the East, all were destroyed. Moreover, in Eastern Europe violence and disruption continued well after the war itself ended: mass rape and looting by Soviet troops, politically and ethnically fueled killings, and the involuntary transfer of millions of people. Within this climate of fear, uncertainty, and suffering, Stalin set out to build a new political and social order. The origins and character of this order in Poland, Hungary, and East Germany are the subject of Iron Curtain.

Applebaum takes her title from Winston Churchill’s famous description of Eastern Europe, usually quoted from his speech in Fulton, Missouri, in March 1946, but actually first used nine months earlier, when he wrote to Harry Truman that “an iron curtain is drawn down upon their front. We do not know what is going on behind.” As Applebaum correctly points out, Churchill’s image of an opaque curtain between East and West was false and self-serving. Western leaders knew quite well what was going on behind the Soviet lines. While she has no doubt that the imposition of Communist domination was driven by Soviet policy, and not—as some revisionist historians have claimed—in response to Western antagonism, she recognizes that policymakers in Washington and London were fully aware of the tightening vise of oppression, even if they were unwilling and probably unable to do anything about it. The iron curtain may have inhibited Western interference, but it did not mask the way in which the Soviets were imposing their will.

The men selected to oversee the imposition of Soviet domination arrived in the baggage train of the Red Army. Walter Ulbricht of East Germany, Boleslaw Bierut of Poland, and Mátyás Rákosi of Hungary were Moscow’s creatures; all had spent the past decade in the Soviet capital, demonstrating their loyalty to Stalin, polishing their talent for intrigue, and mastering the skills necessary to survive in one of history’s most lethal political environments. Behind the façade of the often absurd personality cults created by and for these “little Stalins” was the hard fact of their dependence on Soviet power.

Since they were largely out of touch with their homelands, it is not surprising that Eastern Europe’s imported leaders miscalculated the depth of their popular support. When Communists did badly in early elections, they abandoned democratic forms, repressed potential opposition, and imposed strict conformity within their own ranks. Elections became an empty ritual, while the secret police, whose organization and procedures had also been imported from the Soviet Union, provided the essential foundation of every regime.

Both Communist ideology and Russian national interest demanded more than just passive obedience from the inhabitants of the Eastern European glacis that lay between Russia and its enemies in the West. It was necessary to create active supporters, enthusiastic participants in the formation of a new society, indeed a new kind of human being, “Homo sovieticus.” In a series of deeply researched and vividly written chapters, Applebaum shows how the regimes attempted to do this through the use of the mass media, especially radio, the organization of youth and the growing domination of the educational system, the cult of work and the construction of new industrial cities, the ideological penetration of literature and imposition of a distinctive style of “socialist realism.” I particularly admired her chapter on “ideal cities,” which describes the social, political, and architectural structure of Sztálinváros in Hungary, Stalinstadt in Germany, and Nowa Huta in Poland, all intended to be vital centers of industrial production and expressions of an authentic proletarian culture. None of them truly fulfilled these goals, and today their decaying remains, partly abandoned but with new, politically correct names, are emblems of the Communist order’s empty promises and ultimate collapse.

Applebaum skillfully illustrates her analysis of ideology and institutions with brilliant portraits of individuals, both members of the elite and ordinary men and women. She has a historian’s grasp of long-term trends and a journalist’s eye for telling details and compelling personal stories, many of them taken from interviews with contemporaries. While Applebaum has strong views about what she describes, her opinions are always well founded, her judgments even-handed and fair. On politically charged and emotionally painful subjects such as postwar Polish anti-Semitism, including the lethal pogroms that took the lives of scores of Holocaust survivors, she writes with exemplary balance and restraint.

The key analytical concept in Applebaum’s book is totalitarianism. The term was originally coined by an opponent of Italian fascism but was quickly embraced by Mussolini, who proudly declared his intention to create a “total state.” To both its critics and proponents, totalitarianism refers to a distinctly modern form of dictatorship that aims not simply to monopolize political power but also to dominate all public and private life, compelling total compliance and enthusiastic affirmation. Totalitarian regimes, therefore, have both leadership cults and mass parties, an omnipresent repressive apparatus and an elaborate array of political, social, and cultural organizations.

In Applebaum’s capable hands, totalitarianism performs useful interpretative work, but her book also suggests some of the concept’s limitations. It is, first of all, better at explaining what regimes want to do than what they actually accomplish. Despite Il Duce’s ideological bluster, Mussolini’s Italy was anything but a total state. And, as Applebaum makes clear, while Eastern European regimes were able to monopolize power and squash dissent, they were not able to compel unqualified popular support. Second and more important, the term works best for analyzing politics and culture, much less well for social life and economic institutions. Applebaum’s chapter on Eastern European economies is uncharacteristically terse and indecisive, the least successful in an otherwise excellent book.

Iron Curtain concludes with the three turbulent years that followed Stalin’s death in March 1953. In June, a popular uprising, which began in East Berlin and spread to other parts of East Germany, was swiftly repressed by Russian troops. Three years later, following Khru-shchev’s extraordinary denunciation of Stalin at the Twentieth Party Congress, reformers in Poland and Hungary, misreading the new Soviet leadership’s tolerance of innovation, attempted to introduce broad democratic changes. They too were repressed, in the case of Hungary after a brief but bloody struggle. For the next three decades, the instruments of repression introduced after 1944 remained, as did the possibility of Soviet intervention. In 1989, when it became apparent that neither the regimes nor their Soviet allies were prepared to use force to stay in power, Eastern European communism collapsed with remarkable speed.

Like all first-rate history, Applebaum’s book illuminates what happens after her narrative ends in 1956. Above all, her astute reflections on the psychological impact of these regimes explains why they lasted as long as they did. The Eastern European version of Homo sovieticus was often someone who had come to terms with the status quo, which, after all, they had every reason to believe would remain forever. Compelled by an uneven and unstable mixture of conviction and self-interest, hopes of reward and fears of punishment, people conformed, even when they may have disliked their government and distrusted its propaganda. Applebaum calls these people “resistant” or “reluctant” collaborators. We now know that, by the 1980s, the number of reluctant collaborators had significantly increased. Most prominently in Poland, but to some degree throughout Eastern Europe, ideological energies were declining, cynicism and dissatisfaction growing. In 1989, the true extent of popular disaffection was suddenly revealed when, in one Eastern European state after another, a contagion of revolutions produced the greatest peaceful transformation in European history.

So swift and apparently complete was this transformation that it is sometimes difficult to see how habits and memories from the old regime continue to influence the attitudes and behavior of those who lived on the wrong side of the Iron Curtain. Marx may have been wrong about the locomotives of history, but he was right to insist that “the tradition of all dead generations weighs like a nightmare on the brain of the living.” As they set out to build stable and democratic institutions, the new democracies of Eastern Europe must, each in its own way, come to terms with these traditions. In this rich and compelling account of Eastern Europeans’ troubled past, therefore, Anne Applebaum helps us understand the challenges they must now confront.