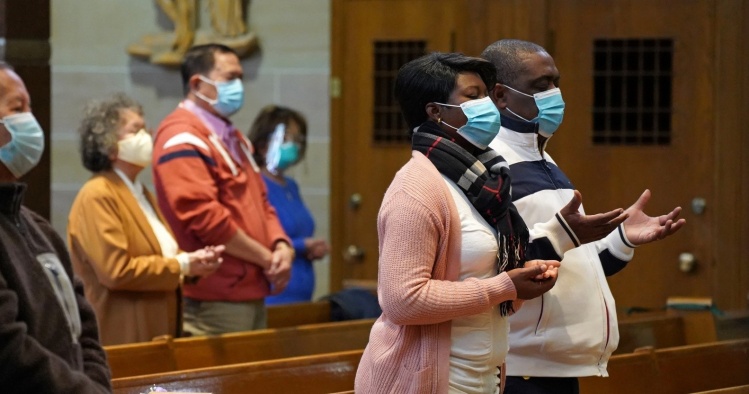 Worshippers recite the Lord's Prayer during Mass on the feast of Christ the King at Immaculate Conception Church in Jamaica Estates, New York, November 22, 2020 (CNS photo/Gregory A. Shemitz).

It’s fitting that Amy Coney Barrett, whose nomination to the Supreme Court was celebrated with a superspreader event at the White House, would begin her tenure by targeting measures meant to combat the pandemic. In Roman Catholic Diocese of Brooklyn v. Cuomo, the Supreme Court ruled that restrictions on religious gatherings imposed by New York’s governor violated the free-exercise clause of the First Amendment. Barrett’s influence was unmistakable. The late November decision departed from two similar cases in recent months that involved churches in California and Nevada. Their outcomes depended on Chief Justice John Roberts joining the four members of the court’s liberal wing—which then included Ruth Bader Ginsburg—to uphold public-health rules.

Now that Barrett has replaced Ginsburg, the Supreme Court’s conservatives have been further empowered. In an unsigned majority opinion, five of them took aim at an executive order signed by New York Gov. Andrew Cuomo that puts a strict cap on attendance at religious services in certain color-coded geographical zones, classified by severity of their COVID-19 levels: in “orange zones” twenty-five people can attend; in “red zones” only ten. Because there were no such limits on either “essential” businesses in red zones or non-essential businesses in orange zones, the conservative majority concluded that houses of worship had been singled out for especially harsh treatment. Justice Neil Gorsuch was particularly irked that liquor stores and bike shops weren’t covered by the restrictions. “Who knew public health would so perfectly align with secular convenience?” he wrote in his concurrence.

The reason for such disparities should be obvious: attending Mass isn’t anything like picking up a bottle of wine.
sharetweet

It’s a silly point, one that has less to do with public health or the law than with culture-war grievances. The reason for such disparities should be obvious: attending Mass isn’t anything like picking up a bottle of wine. Justice Sonia Sotomayor ably dispensed with Gorsuch’s reasoning in her dissent, noting that he “does not even try to square his examples with the conditions medical experts tell us facilitate the spread of COVID–19: large groups of people gathering, speaking, and singing in close proximity indoors for extended periods of time.” One might add that, when compared with similar secular events, religious services actually receive preferential treatment in New York—concerts, spectator sports, and movie theaters, for example, are given no reprieve at all.

This is not to say that Cuomo’s executive order is beyond criticism. It seems reasonable to suggest that attendance limits could be determined by a venue’s capacity—that a vast cathedral should be treated differently than a cramped parish church. But measures implemented in an emergency, subject to adjustment and revision, may be imperfect without being unconstitutional. For all the conservative justices’ talk of judicial restraint, this was a striking example of legislating from the bench and usurping the discretion of elected officials.

The day after the decision in Roman Catholic Diocese of Brooklyn v. Cuomo was announced, Pope Francis published a moving reflection in the New York Times on how he hoped the pandemic would touch our hearts. He expressed his disappointment at those who protest reasonable public-health restrictions, forsaking consideration of the common good. “It is all too easy for some to take an idea—in this case, for example, personal freedom—and turn it into an ideology,” he wrote, “creating a prism through which they judge everything.” He might as well have been talking about the  Supreme Court conservative majority. For them, “religious liberty” means exemption from having to deal with people or policies they dislike. That they cloak their defiance in the language of the Constitution should fool no one.