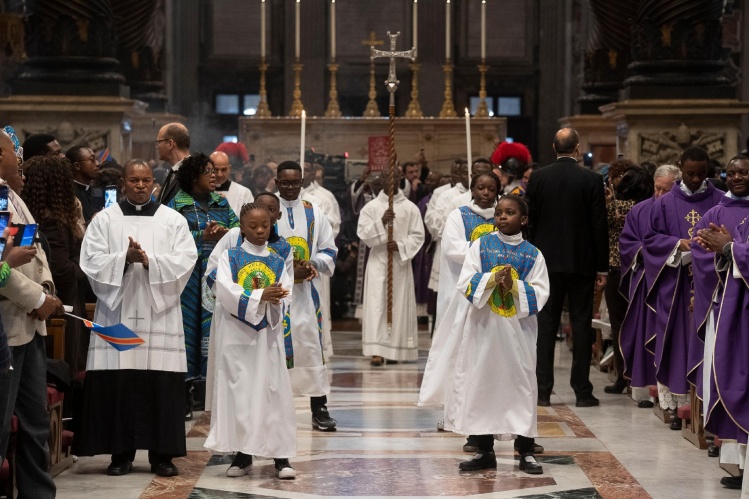 Pope Francis celebrates a Mass in the Zairean rite for the Congolese community in Rome, December 1, 2019 (CNS photo/Vatican Media).

One of the final recommendations from the October 2019 Synod on the Amazon was that a liturgical rite be developed for use by the indigenous peoples of the Amazon. This collaborative effort would be a work of liturgical inculturation, representing an integration of Catholic faith with the culture of the Amazonian peoples—a Catholic liturgical expression “valuing the original worldview, traditions, symbols and rites that include transcendent, community and ecological dimensions.” In his post-synodal exhortation, Querida Amazonia, Pope Francis embraced inculturation too: “What is needed is courageous openness to the novelty of the Spirit, who is always able to create something new with the inexhaustible riches of Jesus Christ.”

Just a few weeks after the synod, Francis presided at a celebration of the Zairean liturgy at St. Peter’s Basilica for the Congolese community in Rome. The Zairean rite is the only fully inculturated liturgy to emerge since the Second Vatican Council, so the symbolic value of the event was high. A book about this experience was recently published with a preface written by Francis praising the liturgy and affirming it as a model of inculturation for the Amazon and elsewhere. He also produced a video message promoting it. Francis, it would appear, is becoming a serious advocate for liturgical inculturation.

What is liturgical inculturation? It is the insertion of liturgy into a given culture in such a way that the liturgy absorbs the culture (and is thus able to speak from within the culture) and the culture absorbs the liturgy (and thus the Christian faith upon which it rests becomes more deeply integrated into the social fabric and worldview of that society). The fathers at Vatican II, when writing the liturgy constitution, incorporated four critical paragraphs on liturgical inculturation (37–40). These gave permission for cultural adaptation of the liturgy in both a simple and a profound manner. It was, and still is, a big deal.

The Zairean rite is the only fully inculturated liturgy to emerge since the Second Vatican Council.
sharetweet

For one thing, it was a decision that ruled out a kind of cultural imperialism that identified Catholic liturgy exclusively with its European expressions. For another, it has sparked a lot of critical reflection on the role of culture in how people worship generally. As my mentor in liturgical studies, Aidan Kavanagh, used to say, “the liturgy did not fall from heaven in a Glad bag.” Liturgy has always drawn on local cultures—not only art, music, vesture, and architecture, but also prayer forms, gestures, and liturgical actions. During the Tridentine era, however, there was a great deal of pressure to centralize control and enforce liturgical uniformity. This was the situation that Vatican II set out to correct.

The Church continues to expand in regions of the world that are home to widely diverse cultures. Why not allow liturgical variations that will speak to the hearts of people living in the Congo Basin? Or the Torres Straits Islands? Or the Amazon rainforest? Advocates of inculturation see it as an opportunity for evangelization. Unfortunately, one has only to recall the hysterical reaction to the presence of statuettes of a pregnant woman at the Amazon Synod to see that ignorance and negative assumptions about indigenous people can fuel opposition to inculturation. We cheerfully put an Advent wreath in a church (a custom derived from pre-Christian Scandinavia), but a piece of Amazonian folk art is presumed to be the product of idolatry.

At the official level, the greatest openness to inculturation occurred immediately after the council, during the pontificate of Paul VI. During the John Paul II and Benedict years, however, the atmosphere turned hostile. It’s not as though no one tried. A rite was proposed for India. It was never approved. A rite for the Philippines was completed, but likewise sat on a desk in the Curia. The only liturgy that got through the net was the Congolese Rite. This is why the “Roman Missal for the Dioceses of Zaire” is so important. It’s the sole example of what the council actually hoped for, and what Francis now seeks to revive.

The name of their liturgical ordo was imposed on them (they wanted to leave “Roman” out of the title). Nevertheless, even as it remains totally recognizable as the Mass, quite a number of its distinguishing features are rooted in African soil. To name but a few examples: the liturgy includes an invocation of the ancestors. An “announcer”—a particular ministry not known in other iterations of the Roman Rite—invites the participation of the assembly. Servers may carry spears as an honor guard. There is an elaborate offertory procession. The altar is venerated in four directions. Most impressive, there is dancing throughout the Mass. Fridolin Ambongo Besungu, the cardinal archbishop of Kinshasa and a member of Francis’s cardinal advisory council, participated in the Amazon synod as a representative of Africa. He spoke at a press conference, noting parallels between the Amazon and the Congo Basin, and he praised the Zairean rite, saying, “our Eucharist is a feast.” Will the Amazonian people likewise have their feast, drawing on the riches of their culture in the celebration of Eucharist? If Francis has anything to say about it, the answer is evidently “yes.”