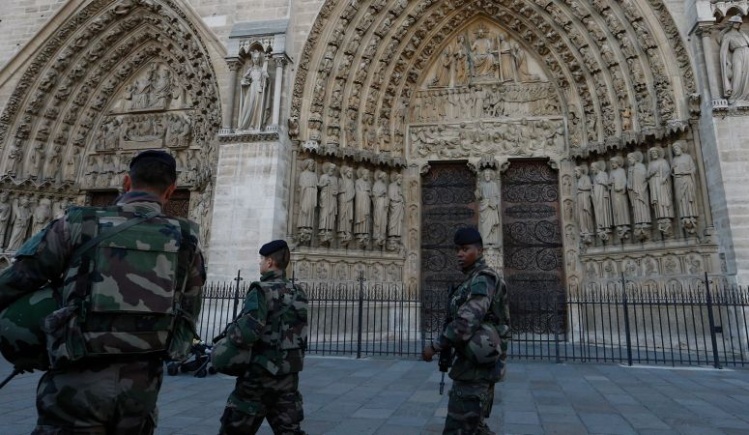 The recent statement, “An Appeal to the Catholic Church to Re-Commit to the Centrality of Gospel Nonviolence,” has been hailed as a “landmark” and “groundbreaking” proclamation calling on the church to embrace pacifism and move away from its traditional just-war teaching. The statement was the result of an April conference at the Vatican sponsored by the Pontifical Council for Justice and Peace and Pax Christi International. However, contrary to many reports, especially on social media, the statement was not in any sense an official proclamation by the Vatican or Pope Francis.

There is much to be commended in the appeal. Its prophetic call to embrace peacemaking more seriously and to emphasize nonviolence is most welcome. So is the document’s global perspective, especially amplifying the voices of those who experience war firsthand outside of North America and Europe. All Catholics are called to be peacemakers, to pray for peace and work toward the abolition of war. This should be a commitment not only of Catholic pacifists—who believe that all war and violence are immoral—but also of Catholics who think that armed force is sometimes morally justified.

But the statement also indulges in a tendentious reading of the church’s just-war tradition. For example, the appeal declares that “a different path [of nonviolence] is clearly unfolding in recent Catholic social teaching.” It goes on to cite Popes John XXIII, Paul VI, John Paul II, Benedict XVI, and Francis in support of that claim. Yet each of these popes, while extolling the virtues of nonviolent peacemaking, also retained just-war thinking—even if under the label of “legitimate defense.”

Consider John Paul II, who said, “We are not pacifists, we do not want peace at any price.” John Paul also made sure just-war thinking had a place in the Catechism and the Compendium of the Social Doctrine of the Church. More recently Francis, speaking about ISIS, asserted, “It is licit to stop the unjust aggressor.” He also sent a letter to the April conference quoting Vatican II’s Gaudium et spes: “Governments cannot be denied the right to legitimate defense once every means of peaceful settlement has been exhausted.” All these examples reflect the mode of moral reasoning traditionally called “just war.” Both the United Nations Responsibility to Protect (R2P) obligation and “legitimate defense” are species of a genus: the justified and limited use of armed force in defense of the innocent. If and when the day ever comes when war is abolished—and like all Catholics, we pray for the arrival of that day—there will still be the need for armed force (i.e., “just policing”) to enforce the law outlawing war when terrorist groups or nations break it.

Of course, the appeal’s main criticism can’t be denied: “Too often the ‘just-war theory’ has been used to endorse rather than prevent or limit war.” But this is not a problem with just-war thinking per se; it is problem with how it is used. A longstanding maxim in Catholic moral theology is that the abuse of an idea or principle does not negate its valid use. As John Courtney Murray noted many years ago, “The Ten Commandments do not lose their imperative relevance by reason of the fact that they are violated.” So too with the just-war tradition, and as Murray further noted, “there is place for an indictment of all of us who failed to make the tradition relevant.” Thus the appeal’s recommendation that the church “no longer use or teach ‘just-war theory’” is misplaced. Instead of jettisoning the just-war tradition, it would be better to call for a more robust commitment to its criteria and for the church to be more willing to condemn wars as unjust when they fail to meet the rigorous demands of the tradition.

Very few conference participants seemed to fully understand Catholic just-war thinking, especially in its contemporary form. Most ethicists today speak of the “just-war tradition,” recognizing that there is no single, universally agreed-upon just-war “theory.” Some Catholics appeal to this tradition in a way that too easily sanctifies military action, such as George Weigel’s and Michael Novak’s hawkish defense of the preemptive war in Iraq. Yet most Catholic ethicists used just-war reasoning to criticize that war. An honest grappling with the just-war tradition, its uses and abuses, excludes neither example.

The statement also fails to recognize that contemporary Catholic just-war thinking has evolved in recent decades. In Catholic just-war thinking there is now a strong presumption against the use of force; an understanding that war is never a good in itself, but at best morally justified as the right or necessary thing to do, even with the many evils, moral or not, that result from it; and a determination that all criteria of jus ad bellum (which governs when nations may legitimately go to war) and jus in bello (which governs how militaries should behave in war) be fully satisfied.

MORE RECENTLY, TWO additional categories regarding just war have been introduced and emphasized. The first, jus ante bellum, refers to a robust and perpetual commitment to proactive and just peacemaking practices. Thus, from the start, the conference statement sets up a false dichotomy between nonviolence and just-war thinking. This is particularly odd, considering that the appeal embraces “just peacemaking,” a middle-ground position between pacifism and just war that was first articulated in the late 1990s by the late American Baptist Glen Stassen and others. Just peacemaking does not reject all uses of armed force, recognizing the legitimacy of humanitarian intervention. This was a bone of contention between pacifists and just-war theorists engaging with Stassen’s project, but they agreed that just-peacemaking practices, now incorporated into jus ante bellum, would diminish the likelihood of war and underscore that war truly should be a last resort—which is a criterion for just war under jus ad bellum.

The second recent development, jus post bellum, consists of a rigorous set of criteria that expects warring parties to establish a just and lasting peace after combat. This category reflects how just-war theory takes seriously both pacifist and realist concerns about faithful and effective ways to diminish the likelihood of further violence in the wake of war. In 2006, for example, Bishop Thomas G. Wenski called for jus post bellum in Iraq under the rubric of the need for a “responsible transition.” Likewise, Rear Admiral Louis V. Iasiello, the chief of Navy chaplains, stressed the need for jus post bellum since “the ultimate goal of all just conflicts—[is] the establishment of a just and lasting peace.”

Much of current Christian just-war theory, then, maintains a robust commitment to proactive peacemaking, and its principal aim—establishing a just and lasting peace for all involved—governs all the criteria. It simply cannot be claimed that all this amounts to a rationalization of war. Indeed, the U.S. bishops’ 1983 pastoral letter, The Challenge of Peace, so stringently interpreted and applied its criteria that it has often been derided by more permissive just-war proponents as “functionally pacifistic.” Nevertheless, this stricter Catholic just-war theory does allow the use of limited armed force, primarily in cases of national defense and humanitarian intervention.

Even if the case for just war is rare, such cases still occur: specific examples include Rwanda and Kosovo, as recognized by the United Nations in its recent R2P norm for international relations. Another would be the threat posed by ISIS to Christians and others in Iraq and Syria, extreme situations from which perpetrators and victims alike need to be rescued. The statement from April’s conference glosses over these real-life challenges, blithely asserting that nonviolence has the capacity to reduce conflict. While certainly much more can be done to teach and use nonviolent conflict resolution, the statement fails to acknowledge that nonviolent peacemaking also has shortcomings.

Indeed, the conference statement fails to recognize any achievements of just-war thinking. In particular, it ignores the jus in bello criteria, which really have restrained professional militaries from abusing their power—they are in fact what distinguishes professional militaries from criminals. While militaries have sometimes violated these principles, it is precisely because of just-war thinking that war-crimes trials can be held. Without just-war principles informing these trials, the moral and legal resources that help hold accountable soldiers who indiscriminately kill noncombatants or use excessive force against combatants would be greatly diminished.

Some contemporary just-war theory also places emphasis on virtues, practices, and character, so that just-war thinking is not reduced to a mere checklist of principles. United Methodist theologian Daniel M. Bell Jr.’s work in this area is particular noteworthy.

There is one last problem with April’s statement that deserves attention: the way it selectively and mistakenly engages Scripture and tradition. A number of just-war theologians—from Ambrose and Augustine to the Protestant ethicist Paul Ramsey and others—anchor their theory of just war in Scripture, particularly Jesus’ call for love of neighbor, including the enemy. The resort to force should truly be a last resort, but it can be a moral necessity if that is the only way left to protect the innocent neighbor. Out of respect for the human dignity of the aggressor, the use of force should be governed by the principles of proportionality and discrimination between combatants and noncombatants. Those who voted in support of April’s appeal may not agree with how just-war proponents interpret Scripture, but they should not portray their view as the only one with scriptural warrant. The term “just” in just war, after all, does not mean just as in perfectly right or good; it only means morally “justifiable” or “permissible.”

Whatever its merits, the statement on nonviolence produced by April’s “Vatican” conference presents a distorted version of just-war thinking. It fails to engage in an honest dialogue on the church’s ethics of war and peace in all its richness and diversity. Any future encyclical on war and peace should be written to clarify these matters by upholding the noble, necessary just-war tradition that is needed now as much as ever.

Mark J. Allman is professor of Religious and Theological Studies at Merrimack College. Tobias Winright holds the Hubert Mäder Endowed Chair of Health Care Ethics at St. Louis University. They are coauthors of After the Smoke Clears: The Just War Tradition and Post War Justice (Orbis, 2010).