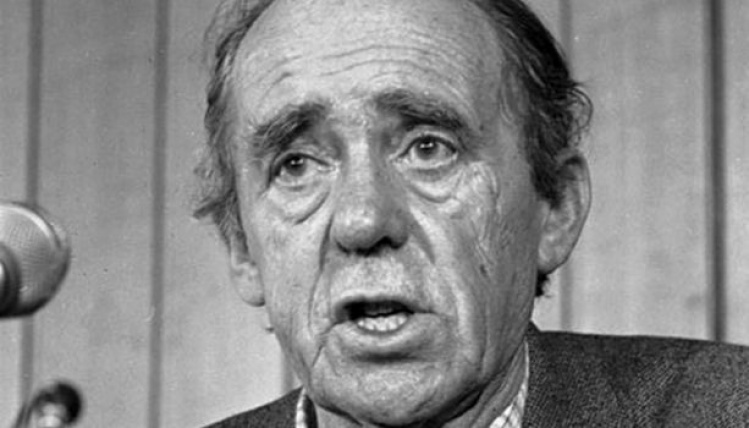 In 1918 German sociologist Max Weber devised the phrase “disenchantment of the world” to contrast modernity’s emerging values of science, rationality, and bureaucracy with its fading religious and spiritual values. Thirty-five years later, his fellow countryman, the novelist Heinrich Böll (1972 Nobel Prize winner), seems to undermine Weber’s thesis, describing in his Irish Journal an enchanted land in the modern world.

When my great-grandmother, Margaret Foy, left Ireland in 1850, she likely felt “disenchantment” for reasons other than the values of modernity. In my Chicago childhood there was never mention of Ireland’s “enchantment”—or talk of Ireland itself. But now planning a visit, I undertook a cram course. Böll’s little book was among my choices along with a few weighty history tomes. These latter describe Ireland as a land so ancient that it existed before God created the universe; then, with the coming of humans there followed centuries of warfare. When Böll arrived in the early 1950s, Ireland—or at least the parts he visited—was at peace. His Journal reports and relishes its humorous, observant, thoughtful, patient, kindly, welcoming, garrulous, and enchanting people. Ireland, of course, was neutral in World War II and Böll may have felt more welcome there than in, say, France. Germany in the early ’50s was still coming to terms with the moral atrocities of the Nazis as well as its wartime destruction; little wonder, then, that Ireland might have seemed enchanted to Böll.

Could he have been right? He encounters neither bureaucracy nor rationality—never mind science. On the trains from Dublin to Westport, conductors cheerfully take IOUs because the currency exchanges are closed. In torrential downpours, doors are opened and unexpected guests are welcomed. The annoyances of daily life are occasions for conversation and good humor. The nine o’clock movie, starring Ann Blyth, can begin only after the priests finish their dinner. Not to fret. As 9:00 becomes 9:30 and then 10:00, the audience exchange jokes and stories; candy, chocolates, cigarettes are passed up and down the aisle. Children in the front rows carry on like it’s recess. This gives Böll plenty of time to meditate on an Irish truth: “When God made time, he made plenty of it.” You hear that, Max Weber? The priests finally arrive; the movie begins and ends. Well after midnight, the projector light fades; the theater lights come up; the doors open; the audience smile at the pleasure they have had and begin to go home. Still plenty of time!

Whatever happens in Ireland, you “break a leg, miss a train, go bankrupt,” the response is, “it could be worse...you might have broken your neck.” Minor events elicit the placid, “I shouldn’t worry,” which goes for the weather, a sick child, or running out of cigarettes. (Böll shares the Irish chain-smoking habit.)

The affection and tenderness of the Irish Journal is a stark contrast to Böll’s bitter novellas and short stories of the same years. These dwell on the callousness of the German army toward the conquered as well as its own soldiers. Böll served in both France and Russia, and blessed the day he was taken prisoner by American soldiers. After the war, he attacked the church for failing to criticize Hitler and refused to acquiesce in the nation’s amnesia about the treatment of Jews, Poles, Russians, and the German population itself. Some of his stories awaited the 1980s for publication. Yet, as Germany began to come to terms with this past, Böll remained a sharp critic. He was not a “good” German. He might have been a better Irishman.

Perhaps the Irish Journal served as a “might have been,” a different life. In an interview many years later, Böll said, “I could imagine, if the Nazis, the war, and postwar political developments had not happened that I might have led a very secretive life. But as a citizen of the Federal Republic and as a German I could not manage that. Sometimes I try to do it, to become a kind of mixture of Irishman and Oblomov—an Irish Oblomov—but I can’t do it.”

I wonder. Turn to the story of the policeman who stops the car and begins with “Nice day today...how are you?” Many pages and much repartee later, he asks the driver for his registration. “Oh, I left it at home.” The policeman: “Oh well…I expect your face is your own.” Take that, Max Weber!