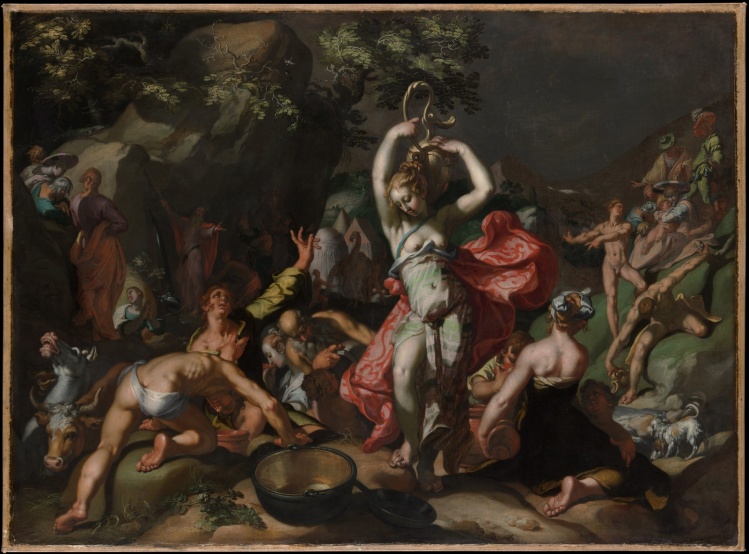 Jean-Christophe Attias’s new book on Moses is strange, contradictory, and altogether unlike anything I’ve ever read. More abstract art than scholarship, story, or memoir—it blends elements of all three—A Woman Called Moses: A Prophet for Our Times dispenses with orderliness in favor of a kaleidoscope of conflicting elements. Some of these are problematic, like the gendered claim that Moses was a “woman”—not because he transcended gender binaries but because, as Attias has it, Moses was fragile and weak, like a woman. (The original French title is Moïse fragile.) I finished this intensely personal, evocative book exasperated. And yet I couldn’t shake it, and I still can’t.

A professor of medieval Jewish thought at the Université PSL in Paris, Attias is known for a number of books about Judaism. (English translations include The Jews and the Bible, The Jew and the Other, and Israel, the Impossible Land.) His latest book is distinctive. It’s not the product of a working historian but rather “the book of a Jew,” one who has been “suddenly liberated from the constrictions, constraints, and petty pedantries of his main discipline.” Throughout, Attias interweaves classical Jewish commentaries with specific biblical scenes from Moses’s life in the Pentateuch. He then uses them to build a complicated and provocative picture of Judaism’s most important prophet. Often retrieving obscure and overlooked biblical passages and reflecting on them imaginatively, Attias claims to look “behind the veil” of traditional scholarship to behold “the plain face of a plainly human Moses,” one that belongs simultaneously to Egypt and Israel. Victimized and hounded by God, Moses for Attias is an inadequate and abused figure, frail and even “feminine.”

Relying more on rabbinical thought than on the Bible itself, Attias writes from a distinctively Jewish perspective. He seems to assume a primarily Jewish audience, and a particular one at that. His prose often reads rabbinically, and his arguments develop non-linearly. Attias frequently draws connections to other biblical passages that can seem arbitrary—that is, unless one is versed in the entire corpus of written and oral Jewish tradition. Because his reflections tend toward the philosophical rather than the textual, readers expecting exegetical rigor or biblical “accuracy” will find themselves perplexed.

That’s not to say Christians shouldn’t read it. They should. Christian exegetes have traditionally reduced Moses to a mere prefiguration of Christ, and Attias loudly registers his distaste for this kind of supersessionism. Time and again, he dismantles Christocentric views of Israel’s prophets, instead highlighting unflattering rabbinic perspectives on Jesus. Attias also insists on reclaiming Moses as the unique transmitter of Divine Law to Israel, and at least in this endeavor, he’s to be commended.

While it’s true that Attias’s stated intent is progressive, he ironically perpetuates a toxic understanding of gender relations.
sharetweet

Still, it’s difficult to fully buy into the hype surrounding A Woman Called Moses. Some reviewers have praised the work as “original and magical,” a “creative work of contemporary Jewish thought” that combines modern sensibilities and literary finesse with the “biblical imaginary and classical commentaries.” A better, more accurate description lies in Attias’s own conclusion, where he acknowledges the book’s real weaknesses:

The Moses of this book is not Moses, assuming there ever was a Moses. He is not the Moses of history, or even of Scripture. Without being arbitrary, the portrait I have sketched is certainly incomplete and only relatively coherent. I have liberally derived almost as much in the way of materials, forms and colours from the rabbinical tradition as from the Bible. And, in opting to rely on some of the most enigmatic verses of the scriptural text to clarify his features, and sometimes also to obscure them, I am not unaware that I might have conveyed a sense of hanging ‘mountains on a hair.’ I take responsibility for these limitations, this presumption and uncertainty. Yes, my Moses is ‘frail’ in this sense as well.

Whose Moses are we really discussing then: God’s, or Attias’s? Attias’s use of the phrase “mountains on a hair” is worth pausing over. In the Mishnah, a collection of Jewish oral exegetical tradition compiled in the third century, the “mountains” are voluminous interpretations of Sabbath laws that rest on tenuous “hairs” taken from Scripture. And Attias’s interpretive methodology, based primarily on his own arbitrary predilections, is indeed tenuous, if not outright tendentious. He makes a few facile claims, asserting that historical-critical methods of biblical interpretation merely enact “violence” in order to “deconstruct” the Bible. This is inadequate: Jewish (and Christian) interpreters have long understood that historical methods are but one part of the whole, useful tools that deepen our understanding of the Bible’s embeddedness in time and place. This hardly harms our faith. Quite the opposite; such knowledge aids our understanding of the Divine.

As a trained historian, Attias should know this. But he occasionally reads the Bible like a fundamentalist, decoupling the text from its historical and literary contexts. One example: Attias adopts the classic literalist interpretation of Moses as the sole author of the Torah, rejecting the notion that it could have been written by later scribes. Attias thus places himself in an untenable position. He suggests that the historical Moses may never have existed, while simultaneously basing his entire literalist exegesis on the assumption that Moses did.

Attias’s exegetical problems aside, he makes two other problematic assertions in the book. The first has to do with gender. Attias uncritically adopts binary definitions of male and female in his vision of Moses “as a woman.” In Attias’s logic, a man is strong, virile, dominant. A woman is “weak” and “feeble.” In passages where Moses falls short of his duties, when he fails (seemingly) to produce a progeny, when he collapses from fatigue, he is “acting like a woman.” While it’s true that here Attias’s stated intent is progressive, he ironically perpetuates a toxic understanding of gender relations.

There’s also Attias’s simplistic view of Judaism. This comes at the end of the book, when Attias reveals his desire to offer an alternative “Judaism” to the two that he suggests are readily available: that of Abraham (purely ethnic), and that of Joshua (conqueror of the land). Attias’s deeply divisive and overgeneralized sweep of modern Judaism ignores and paints over a rich diversity of contemporary Jewish perspectives. One wonders how he would categorize various Jewish movements (such as Reconstructionist, Reform, Conservative), or how he would differentiate, say, American Judaism from French Judaism.

It’s possible that Attias is pushing back against presumed anti-Semitic tendencies in French continental philosophy (Alain Badiou comes to mind). In presenting Moses as the figure of a third Judaism, one that is both distinctly Jewish and simultaneously universal (Egypt/Israel, man/woman), Attias may be offering a rejoinder to the reductive binary that stereotypically juxtaposes Jewish-law-particular against Christian-grace-universal. Attias’s good intentions aside, what counts is the result. Here he ends up perpetuating the same biases he’s trying to break down.

These problems aside, Attias’s portrayal of Moses nevertheless reveals the author’s respect, tenderness, and even love for the figure. Moses’s fragility is also the fragility of the transmission of Torah itself—Divine Law and Word—and the miracle of its perpetuation. “It is transmitted from mouth to ear,” Attias writes,

from God’s mouth to Moses’s ear, from Moses’s mouth to Joshua’s ear, and so on indefinitely, from teacher to disciple, from generation to generation down to our own, in a chain that might seem fragile, but whose continuity and reliability the tractate of the Fathers is intent on affirming, from Moses onwards.

Ultimately, through his imaginative, playful, and often exasperating depiction of Moses, Attias discloses a poignant longing and hope. And he poses a set of questions we all need to ponder: Who embodies our own fragile, miraculous chains of tradition? Who has seen the entirety of history and promises, daringly, that its arc bends towards new life, despite all the pain and suffering? Ultimately, for Attias, this figure is Moses, within whom lies the promise and embodiment of death and resurrection, for Israel and for us all.