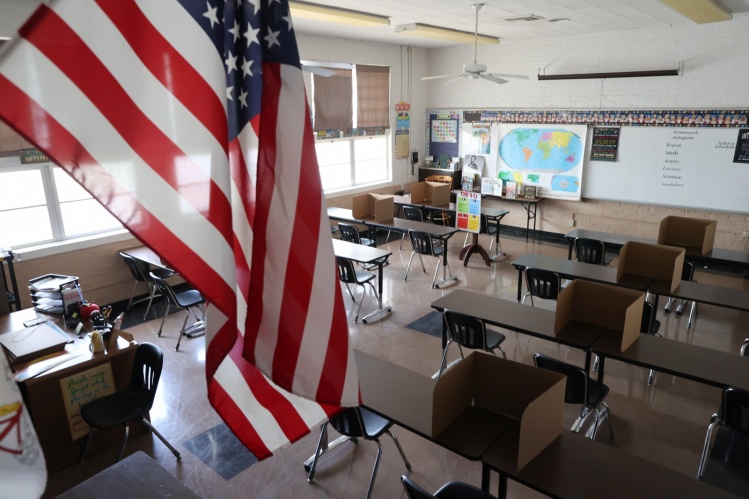 What are we teaching our children about American history? (CNS photo/Lucy Nicholson, Reuters)

I have thought a lot about a concept I call rootedness, which seems to me a fundamental human need. Being rooted in something—whether a community, a faith, a set of traditions, a philosophy, or a devotion to a particular activity—is a way of forming an identity, of telling others, but mostly ourselves, who we are. Rootedness gives us a way of orienting ourselves in the world, of navigating the challenges we face by locating ourselves vis-à-vis the phenomena we encounter. For example, a Christian is a person rooted in the teachings of Jesus; a devout Christian decides whether to participate in a given activity—going to a particular movie, say—according to whether or not that activity aligns with his or her beliefs. Being a Christian is one way of being rooted, and being rooted makes it easier to live in the world.

Rootedness, then, is a good thing. However, it comes with some drawbacks. Chief among those is that when we must decide either to hold tight to the ways we are rooted or to believe the reality in front of our faces, most of us choose our own rootedness, explaining away reality as best we can. This is, of course, very understandable. Our identities, our sense of ourselves, are bound up in the ways we are rooted. To go against that is to risk losing our sense of who we are, and that is a truly frightening proposition. To avoid doing that, we will tell ourselves nearly anything.

Do not teach children that America is, by definition, perfect. Teach them that America’s greatness lies in its ongoing attempt to be perfect.
sharetweet

Many Americans, because of the way they are brought up and educated, are rooted in the belief that the United States of America is beyond reproach. The Founding Fathers, those godlike men, established a nation based on the unassailable ideal of freedom. That is what the nation was at its birth, that is what it remains, and that is the end of the story—except in the minds of those who are dismissed as anti-American, a label slapped on anyone who criticizes any aspect of American life. Those people who are rooted in the idea of America’s irreproachability are unable to confront the nation’s problems—like racism and a broken political system—because those people’s sense of themselves will not allow them to admit that such problems exist. Their desire to preserve their rootedness is in part what drives them to support a president who reaffirms their beliefs, however catastrophically he may otherwise fail as a leader. The more that president is criticized, the more those supporters embrace him, perhaps less out of belief in the president himself than out of a desire to hold tight to their roots.

One look at America’s history will reveal both the nation’s greatness and its monumental flaws. I believe in the truth of both, and I write this as a Black American, one whose ancestors were human beings owned by other human beings. I feel anger at the historical treatment of generations of Blacks; I also feel pride in what those generations of Blacks have nonetheless contributed to this nation, in terms of both culture and sweat. I acknowledge the genius at work in the writing of the Declaration of Independence and the U.S. Constitution. I also acknowledge that genius does not equal perfection, that the Founding Fathers were flawed men who were unable to resolve America’s fundamental contradiction: that the nation ostensibly founded on freedom was actually built on slavery. American history has been a long, fitful, sometimes successful attempt to make the nation’s reality match its ideals, an attempt that has met with resistance at every step. Those ideals, and the attempt to meet them, are what make America great.