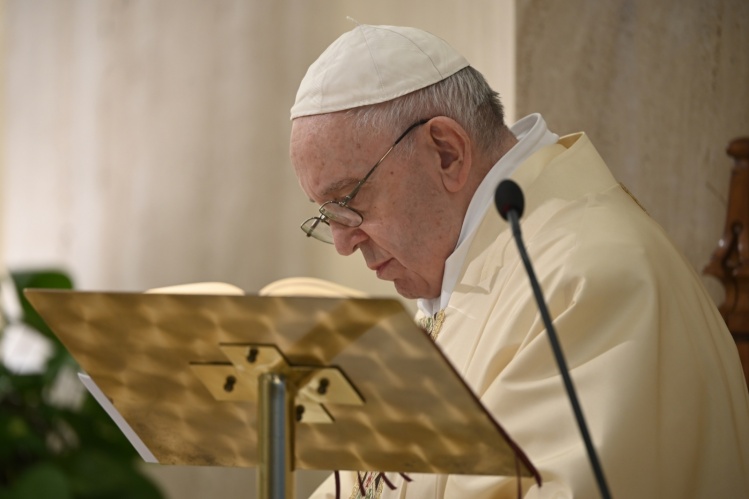 Pope Francis celebrates Mass on April 29, 2020, in the chapel of his Vatican residence (CNS photo/Vatican Media).

Last Thursday, Catholics woke up to surprising—and for many of us, welcome—news: the pope had come out in favor civil unions for gay and lesbian couples. “They’re children of God and have a right to a family,” he’d been recorded saying on footage included in the feature-length documentary, Francesco, which had just premiered. “Nobody should be thrown out, or be made miserable because of it.” Then came the line that has generated so much controversy: “What we have to have is a civil-union law; that way they are legally covered.”

Bold headlines splashed across the Catholic press. “Pope Francis declares support for same-sex civil unions for the first time as pope,” read a typical example. Mainstream outlets like the Washington Post reported the news in a similar way: “Pope Francis calls for civil union laws for same-sex couples.” Meanwhile, commentators scrambled to tell us what it all meant. One of his biographers, capturing the mood among many of Francis’s admirers, described the pope as “speaking directly and unambiguously of the right of gay people to be in families, i.e. loving relationships of care and tenderness underpinned by long-term commitment.”

These headlines, and the stories and commentary swirling around them, were, strictly speaking, accurate. It was the first time since becoming pope that Francis had spoken publicly in favor of civil unions for same-sex couples, and such an endorsement shouldn’t be downplayed—even if it felt like something of a belated concession. As Francis DeBernardo, the executive director of New Ways Ministry, argued after the news broke, when the pope speaks, “he sends forth ripples that have an effect on how policy and pastoral ministry is carried out on all levels of the church.” Though he was not talking directly about doctrine, or advocating for any formal change in Church teaching, Francis’s affirming words could encourage parishes and priests, and all Catholics, to be more welcoming of LGBTQ people. As DeBernardo also emphasized, the comments could especially make a difference in places where, too often with the backing of local bishops, same-sex relationships have been criminalized.

But since news of what Francis said broke, the story has grown more complex—and confusing. It turns out that his endorsement of civil unions did not even happen during filming for Francesco. Instead, as the New York Times reported, the pope’s comments were made in a 2019 interview with a Mexican broadcaster, Televisa. It had been filmed with Vatican cameras, and they controlled what could be done with the footage. According to two people close to Televisa, “The Vatican cut out the pope’s remarks on same-sex unions in the edited version.” The raw footage capturing the remarks about civil unions, however, was placed in the Vatican’s archives. When the makers of Francesco were given access to the archives, they found the footage and used it in their documentary.

Thus, Francis’s comments were finally made public. Surely, though, this convoluted path to their being shared means that words such as “declares” or “calls for” or “directly and unambiguously” are, if not literally wrong, then at least highly misleading. What kind of declaration is made by allowing, perhaps inadvertently, archival footage to be used in a documentary? Since we don’t know if Francis knew that the endorsement had been cut from the original interview or if he knew that it would be included in the new documentary, can it be truly said that he intended to make these views known now, let alone describe him as forthrightly calling for such measures? These are legitimate questions, not conspiratorial accusations—which some, unfortunately, have indulged. There seems to be no reason to question the authenticity of the footage, and while the nuances of the Spanish phrase Francis used, convivencia civil, might be debated, there’s wide agreement that it includes what’s commonly meant by the term civil unions.

Clarification about these matters, alas, does not appear to be forthcoming. As the Associated Press revealed, “The Vatican has refused to comment and imposed something of a media blackout on the matter. None of the Vatican’s in-house media has reported on the cut quote, and on Friday the daily Il Fatto Quotidiano quoted an email from a staffer in the Vatican’s communications ministry to other staff saying there wouldn’t be any comment, but that ‘talks are underway to deal with the current media crisis.’” If that really is the case, it further undercuts the notion that the pope’s endorsement is best understood as an announcement of some kind. Wouldn’t the Vatican at least say something affirmative about what’s happened, or be prepared to respond in some way, if that was the intention?

The Vatican has once again lost control over how Francis’s words are being understood.
sharetweet

It’s true, then, as the anonymous staffer put it, that the Vatican is facing a media crisis. They’ve once again lost control over how Francis’s words are being understood. Among those generally friendly to the pope, the tendency has been to alternate between knowing observations that his remarks were hardly shocking—he backed civil unions as an alternative to same-sex marriage when he was an archbishop in Argentina, after all—and vigorous assurances that once again he’s proven his commitment to charting a different course for the Church on LGBTQ issues. These are not necessarily incompatible or contradictory positions, of course; what matters is that, even among Francis's supporters, there is uncertainty about what his endorsement means. That uncertainty has also given other commentators, including both those inclined to reject progressive views on LGBTQ issues as well as those reliably critical of Francis, the chance to define what’s happened. By not saying what his words did and did not mean, they’ve been interpreted for him.

Sometimes that’s taken the form of emphasizing, correctly, that Francis has not altered what the Church teaches about sexuality and marriage—that is, priority is given to what he is not saying. Mike Lewis, for example, rightly notes that “Francis’s words here belong entirely to the prudential order. This is not about doctrinal issues.” Yet it is precisely because Francis weighed in on a prudential matter that it would be useful to know more about his intentions. He need not elaborate a grand theory of LGBTQ rights to help his flock better grasp what he wanted to bring to our attention. It would be useful to know if his endorsement is best understood as an unremarkable comment in continuity with his past positions, or if his purpose was to shake things up, to impress upon Catholics that opposition to basic legal protections for LGBTQ people would no longer be tolerated. Are accounts that deflate, if not dismiss, the import of the pope’s words closest to the truth?

But more damagingly, the Vatican’s silence has given those who oppose Francis’s papacy an opening to portray the endorsement more darkly—as just the latest proof that he’s dangerously undermining Church teaching. Their concerns have ranged from more sober questions about how his words might be squared with statements on the issue from previous popes to wilder accusations of heresy. Some of these critics would not be satisfied with any explanation that Francis offered, but surely some fair-minded Catholics who might be skeptical of his comments would appreciate greater clarity about what he meant, especially if he intended them to be narrowly construed as little more than permission to stop fighting a rearguard battle in the culture wars.

One possible interpretation of what Francis could be doing, in line with his preferred style of leadership, is that he’s initiating more than deciding. By putting these comments out there, but leaving his intentions somewhat vague, Francis is letting the issue be argued about and debated. It’s meant to be pedagogical: he raises the saliency of an issue, and thereby elicits a broad conversation about it. Not only does that signal that the issue has been on his heart, it also draws out both his supporters and critics, letting him survey the responses to his remarks. Armed with this knowledge, he’s better able to discern the way forward. This would be consonant with ways Francis has used a strategic “silence” at other moments in his papacy. In one of the sharpest observations about his papacy that I’ve encountered, Austen Ivereigh persuasively shows in his recent book, Wounded Shepherd, that Francis often avoids direct confrontations with his enemies. His silence not only gives them the “space” to come forward and reveal themselves, helping him better see the forces that oppose him, it can drive them to frenzied anger as their frustration mounts at his refusal to engage their attacks. Only consider the way Archbishop Viganò’s attempted coup, which initially received a warm reception from a number of mainstream conservative Catholics, has given way to utter crackpottery and deranged dispatches published in a handful of favored right-wing outlets. Rather than debating bad-faith enemies, Francis affords them all the opportunities they need to discredit themselves.

Is that what’s happening now? Perhaps only Francis himself knows. If it is, this time the strategy is failing—even worse, it is the wrong strategy, a kind of category error. The problem is not only that it’s led to a media crisis; it’s created a moral crisis. Sometimes, ambiguity in the name of pastoral concern can be appropriate: when it comes to Communion for divorced and remarried Catholics, for example, the particulars of each situation truly matter. Discernment is necessary because no single rule can cover every possibility. But legal rights for LGBTQ people, including civil unions, are not about discerning their place in the Church. They are not about their spiritual condition. They are about their secular rights. They are about whether the God-given dignity of LGBTQ people deserves legal recognition, or not. They are about whether the abuse and persecution of vulnerable people is tolerated by their governments, or not. It is a yes or no question. Are the lives and loves of LGBTQ people worthy of state protection? There is no good reason for Francis to remain ambiguous about that. His words really do matter. He should use them again, and soon.