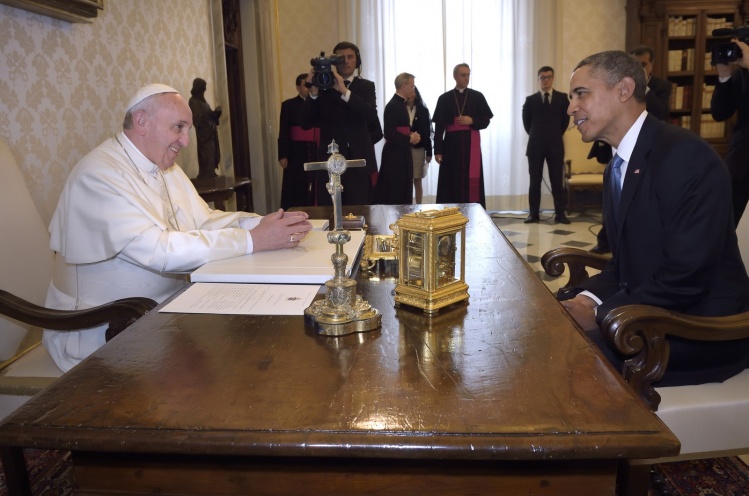 Pope Francis’s much-heralded first trip to the United States begins Tuesday, after what some consider a mischievous stop in the Castros’ Cuba. Francis’s distrust of U.S. economic and military hegemony is no secret. His condemnation of the first-world’s “throwaway” consumer culture has plenty of biblical warrant, but may not register with most American Catholics, who are doing quite well, thank you. Nevertheless, it is likely that Francis’s remarkable warmth and candor will succeed in charming his hosts, just as it has won the affection of just about everyone except bureaucrats in the Vatican and an outspoken group of self-styled “orthodox” Catholics who fear this pope is trying to impose a radical agenda on the church.

Francis will be stopping in Washington, New York, and Philadelphia. In Washington he will canonize Junipero Serra, a Spanish Franciscan who founded many of California’s missions in the eighteenth century. Like most of the things this Argentinian Jesuit does, Serra’s canonization is controversial. Native American groups accuse the missionary of complicity in the genocide of California Indians. As Gregory Orfalea wrote recently in Commonweal, while denouncing the crimes of colonialism, Francis believes the historical record shows that Serra was a defender, not a persecutor, of the native population. He also wants to direct the church’s attention away from Rome to the “peripheries,” and making his first canonization that of a Hispanic from the American West fits the bill. At the invitation of House Speaker John Boehner, a Catholic, the pope will then speak to a joint session of Congress. No canonizations are expected to be made there now or in the near future.

In New York, Francis will address the UN, which is standard fare for popes. No doubt he will call for sheltering refugees and greater peacekeeping efforts from the international community. Much to the annoyance of some, the church has long been an advocate of international institutions. He will also decry climate change and the globalized economy’s impact on the poor, as he did in his recent environmental encyclical, Laudato si’. There will be a visit with the homeless and a Mass at Madison Square Garden. After that it is on to Philadelphia to help close the World Meeting on the Family, a kind of very chaste, very buttoned-upped Catholic Woodstock. Given the conservative bent of the American hierarchy, the meeting’s presentations and workshops are heavily stacked with advocates for the church’s prohibitions against contraception, abortion, civil divorce and remarriage, and same-sex marriage. The meeting’s agenda is no surprise. Philadelphia’s archbishop, Charles Chaput, is among the most dedicated culture warriors. He has confessed perplexity over Francis’s initiatives when it comes to marriage and the family.

If Francis remains true to form when it comes to Catholicism’s moral teachings, he will make a point of softening the tone with which the church interacts with the larger secular culture and with disaffected Catholics.

He has said he wants the church to be a field hospital for the wounded, not a fortress for the virtuous. In the United States, a third of baptized Catholics are no longer practicing. Francis seems to think that the medicine of Catholic teaching goes down easier with a spoonful of honey rather than an earful of reprimands. One should entice people into the church by emphasizing mercy and forgiveness, the common nature of our weakness and sinfulness. Once inside, you will have a better chance of converting spiritual seekers to the Catholic way of thinking and living. To be fair to his critics, it is anyone’s guess whether that more genial approach to the unchurched will work.

The mark of Francis’s papacy has been an emphasis on the church’s pastoral responsibilities rather than a stern defense of doctrine and church discipline. This has dismayed, exasperated, and mobilized conservative elites within the church, many of whom now speak darkly of impending schism. Stoking these fears is the fact that shortly after returning to Rome from the United States, Francis will convene the second session of a bishops’ Synod on the Family. He opened the synod last year by urging the bishops to speak “honestly…without polite deference, without hesitation,” which they did. If nothing else, Francis is determined to let Catholics air their disagreements. As one of his fellow Jesuits told me, this pope is familiar and comfortable with “messiness.” He’s a Jesuit, not a German.

As he has made clear in a number of interviews, Francis learned from his own experience as head of the Jesuit order in Argentina that top-down, authoritarian governance does not work in the long run. It stifles renewal. He wants to decentralize decision making in the universal church, taking it out of the hands of the Italian-dominated curia and returning it to local bishops’ conferences. This is truly a revolutionary development, one that was set in motion fifty years ago in the reforms of the Second Vatican Council calling for greater episcopal collegiality. Pope Paul VI, who presided over most of the council, subsequently balked at that devolution, neutering the synods that were intended to give the bishops of the world real governing authority.

The sight of bishops disagreeing with one another about how doctrine should be interpreted and how the church should respond to questions raised by contemporary culture about gender, sexual morality, and homosexuality has set off a voluble rebellion among Catholic conservatives, some of whom openly question the pope’s fidelity to church teaching. New York Times conservative Catholic columnist Ross Douthat speculates that Francis’s goal has been to “start a civil war and then cleverly resolve it.” Douthat worries that instead the pope is widening “a wound that doesn’t heal.”

Perhaps. An influential minority of Catholics, among them many converts, has long seen the church as a bulwark against and refuge from many of the messy forces Francis now allegedly wants to usher into the church. At the same time, of course, so-called “orthodox” Catholics hold a high view of papal authority. It is curious, to say the least, that many of them now see the greatest threat to the church sitting in the chair of Peter. Evidently, the pope is only “infallible” when you agree with him. (The truth, of course, is that he is rarely infallible.)

Early this month, Francis dramatically reformed the process that Catholics must go through to get an annulment. Some commentators argue that in focusing on procedure, rather than doctrinal reform, the pope has taken the cudgel out of the hands of his opponents. We shall see. Clearly he has a fight on his hands. He famously wants bishops who are pastors who “smell” of their sheep. He does not want men who are constantly looking over their shoulder asking Rome what to do. Will he find enough of them? His appointments, of course, will greatly influence the election of his successor. Much of what Francis is trying to accomplish can be easily reversed by the next pope. However, the Vatican scandals that engulfed Benedict’s papacy reveal how untenable a return to the status quo ante would be. It was not the nefarious influence of liberal reformers that did Benedict in, but clerical cronyism among power-hoarding princes of the church.

It is commonplace to note that it takes a hundred years or more for the Catholic Church to come to terms with changes instituted by an ecumenical council like Vatican II. In the fifty years since the council closed, popes have tried to keep at bay any meaningful engagement with some of the most challenging aspects of the modern world. In order to do that, Roman authority declared that nothing in the church’s teaching about sexual morality and contraception, the all-male, celibate priesthood, the role of women in the church, the selection of bishops, or the power of the papacy can change. Francis recognizes this approach is not working. It took the church nearly 200 years to make its peace with democracy and religious liberty at Vatican II. The result of that surprising reversal was a reinvigoration of the church’s mission and influence, as it became one of the foremost champions of human rights and the advance of democracy around the world. Nor was it surprising that the council’s embrace of democracy and religious pluralism also led to schism, as a small group of traditionalist Catholics, led by the French archbishop Marcel Lefebvre, ran screaming from the room, protesting that the council and the pope had betrayed what the church had always taught. Few people today doubt that the council and the pope were right and the schismatics wrong.

Change is notoriously difficult for the Catholic Church, and truth be told that is often a good thing. I do not claim to know how Catholicism should come to terms with the dramatic changes that have occurred in our understanding of family and sexual life, and I’m suspicious of proposals that merely accede to what has happened in the larger culture. I do think the church should push back, but it cannot stand still. Pope Francis, who is no liberal by American standards, seems to understand that. He might even succeed in striking the right balance.

A Letter to Our Readers