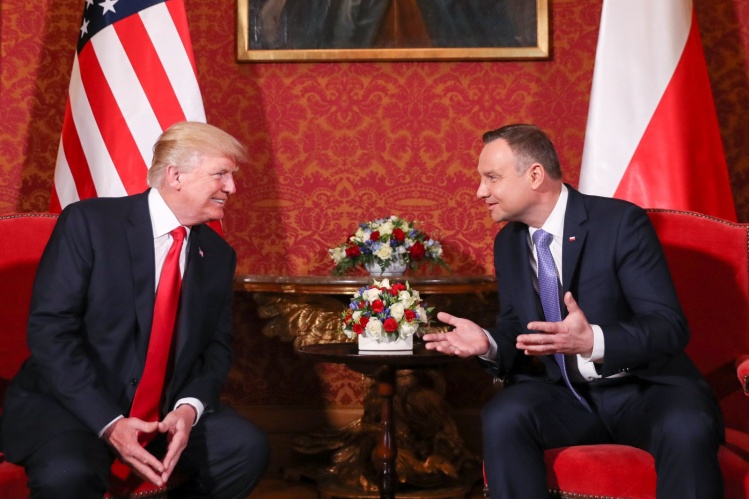 On July 13, Andrzej Duda, the newly reelected president of Poland, received news that the secretary general of the United Nations was about to contact him with a congratulatory phone call. This surely came as a surprise to the populist Euroskeptic leader. True, he had just made a widely reported visit to Washington D.C., becoming the first head of state received by President Donald Trump since the start of the COVID-19 pandemic. But when Duda answered his cell phone, it wasn’t António Guterres who was on the line, but—unbeknownst to him—a pair of Russian comedians who go by the names “Lexus” and “Vovan,” well known for having pranked, among others, Elton John, Emmanuel Macron, and Bernie Sanders. The call lasted eleven minutes.

Though Duda was taken in by the practical jokers, Polish political commentators have found it hard to mock the victorious incumbent—perhaps because, when we think of him, it is mostly as a proxy for another politician long considered Poland’s real leader. Even after hundreds of stump speeches and long televised spots, not to mention five years in power as president of the republic, Duda lives in the shadow of the man to whom he owes his political career, Jarosław Kaczyński. The short, stout founder of Law and Justice (PiS, pronounced “peace”) has for nearly two decades been the bogeyman of Poland’s educated, Europhile elites. The movement that Kaczyński and his now-deceased twin brother launched in 2001 as a campaign to root out post-Communist corruption has traversed a bizarre, winding road. PiS has built a cult around the 2010 plane crash that killed then-President Lech Kaczyński; won the adulation of the integralist mainstream of Poland’s Catholic hierarchy; normalized venomous epithets like “Poles of the worst sort” for voters who support anyone else; and waged a dogged fight to dismantle the independent judiciary and capture major cultural and media institutions. Fifty years ago, Jarosław Kaczyński defended persecuted Jews against the Polish communists’ “anti-Zionist” campaign; now, he accrues political capital through partners and proxies trafficking in anti-Semitism. Once mocked as a middle-aged bachelor whose closest family was his cat, Kaczyński has put family front-and-center in PiS’s campaign to “purify” Polish culture.

Five years ago, Kaczyński plucked Duda from obscurity to unseat an incumbent who had previously beaten Kaczyński for the presidency. This summer, Andrzej Duda won reelection in two successive rounds of voting: the first, held on June 28, with 43.5 percent of the final tally; and the run-off, held on July 12, with 51 percent. Duda, who is forty-eight, makes for a good visual, with a devoted spouse at his side and a university-age daughter. Duda was only seventeen when the Soviet bloc fell, yet he regularly trades in terms like “neo-Bolshevism” to denounce corrupting influences on the Polish body politic. There is a blood-and-soil nationalism in his statements that harkens back to the inter-war Right, though the enemy now is the twenty-first century. His is the voice of backlash against recognition of Poland’s LGBT+ community, instilling fear in religious parents and presenting himself as the only thing standing in the way of their children being forced to declare neutrality of gender identity and sexual orientation. One of Duda’s most-quoted campaign statements was “LGBT is not people; it is an ideology.” His winning electoral strategy, then, was predicated largely on a politics of fear and prejudice in defense of the heteronormative family, and by extension an assault on Church-state separation and its role in public education.

The fight against LGBT+ and gender “ideology,” which has dominated Polish public life for some time, continues even in the face of pandemic. Support for a “normal” Polish family—memorably illustrated by a PiS leader with a meme of Jesus and a bird’s nest full of eggs—is predicated on an unforgiving rhetorical onslaught against Poland’s small, disenfranchised LGBT+ community. Despite the intervention of the European Court of Human Rights, pride parades have long been denied permits or, more recently, targeted with violent counter-marches by football hooligans and neo-fascists. Prominent PiS parliamentarians broadcast hate speech against the LGBT+ community: “Let’s put an end to this idiocy about some sort of human rights or equality. These people are not equal with normal people, and let’s leave it at that.” In 2019, local PiS councilors began trumpeting the creation of “LGBT-free zones” across almost one-third of the country. The powerful documentary film Tu nie chodzi o ludzi (This Is Not About People) depicts the extent and variety of anti-LGBT+ activism across rural and small-town Poland. This is not, in other words, just some right-wing phantasmagoria, but a reflection of the real beliefs of real people. After Duda claimed in a June 14 stump speech that the “ideology” of LGBT+ “is even more destructive to human beings” than was communism, he was excoriated by international news outlets from AP and Reuters to the Guardian and the New York Times. The response was so furious that the president even felt the need to take to Twitter in two languages to paint himself as a victim of “fake news.” His message may have been truncated, but the reporting was accurate enough.

Poland may be less and less liberal, but it still compares favorably with Hungary, Russia, Turkey, and even the United States.
sharetweet

And what of Duda’s now-vanquished opponent? Rafał Trzaskowski’s name may be harsher to the Anglophone ear than Duda’s, but the former challenger is by far the more urbane, cosmopolitan, and international figure of the two. Born in the same year, both are former academics who enjoyed meteoric ascents in their respective parties, occupying minor ministerial posts and seats in the European Parliament before becoming, respectively, president of Poland and mayor of Warsaw. Although Donald Trump has many times referred to Duda as “my friend,” Trzaskowski cultivates genuine friendships with mayors of Europe’s greatest cities: London’s Sadiq Khan, Paris’s Anne Hidalgo, and Stockholm’s Anna König Jerlmyr all stumped for him in online spots, making a point of crediting Trzaskowski with protecting Warsaw from COVID-19 (with the implication that the national PiS government was hampering his efforts). It helps that Trzaskowski speaks five languages, having worked as a translator. Meanwhile, Duda had such trouble stringing sentences together in English during a January forum at Davos that the scene inspired a host of derisive memes.

Three points are essential for understanding Trzaskowski’s defeat. First, PiS’s turn to “LGBT-free zones” was a direct response to Trzaskowski. In February 2019, the mayor signed a declaration on Warsaw’s behalf pledging respect for LGBT+ rights. The declaration made him a hero of the urban center and left, but came off as a provocation to much of the Polish countryside.

Second, Trzaskowski belongs to Civic Platform (PO), the party that has now tangled for fifteen years with Jarosław Kaczyński. In that time, PiS has been dogged by one round of infighting after another, yet the party always closes ranks to face yet again the same, well-known opponent. Former PO prime minister Donald Tusk went on to a storied career in EU politics, becoming European Council president and, in 2019, head of the European People’s Party, the largest cross-national party coalition in Europe. It was the unpopularity of Tusk’s government after two terms that paved the way for PiS to capture both the parliament and the presidency, and even many of Kaczyński’s critics look back on the PO governments as a time of corruption, elitism, and disinterest in the common person. Trzaskowski’s ties to PO had once brought him to national prominence, but in this presidential election, they were arguably also a millstone around his neck.

Third, Trzaskowski only joined the presidential race at the finish. Constitutional scholars have roundly and rightly decried the games the Polish government played with the timing of the elections, long scheduled for May 10, a day when more than three hundred new COVID-19 infections were announced in Poland. The constitution prohibits holding elections in the midst of a natural disaster, and most of Duda’s then-opponents suspended their campaigns in protest. It was only on May 6, by which time tens of millions of Polish złotys had already been spent, that the elections were officially postponed. PO’s original candidate withdrew from the race, and Trzaskowski announced his candidacy on May 15—five days after the elections were to have been held. Less than two months elapsed, in other words, between the start of his campaign and the announcement that he had won 48.97 percent in the final round of voting.

By all accounts, Poland’s public TV Channel 1 dramatically manipulated both messaging and airtime during the final month of campaigning. For example, 97 percent of public TV content devoted to Duda was positive, while 87 percent devoted to Trzaskowski was negative (including flashing “news” headlines like “We’ve had enough of Trzaskowski’s hypocrisy”). PiS manipulated not only public media, but also the national emergency broadcast system; intended for weather or homeland-security alerts, the Government Center for Security network pushed text messages to all cell phones nationwide on July 11 reminding Poles that the run-off was the next day and that “people over 60, pregnant women, and the disabled can vote without waiting in line.”

Opponents of PiS had been praying for the inevitable COVID-induced economic meltdown to come in time for Duda to take the blame. This did not happen. Not only did PiS secure the loyalty of many poorer constituents with social welfare programs intended for large families, the retired, or the disabled, but against experts’ predictions the Polish economy has continued to do well. Poland’s GDP was up by 4.1 percent in 2019, and even the COVID-era figures from May 2020 were encouraging, especially relative to the rest of the EU. (PiS seems uniquely sensitive to the social and economic needs of those left behind by integration with the EU.) Simply put, PiS has managed to earn the favor of many voters, without (yet) doing damage to the economy as a whole. Commentators are now divided: Will this have been a Pyrrhic victory for PiS, in position to take the blame if there is an economic downturn, or instead do “dark years” now await a soon-to-be-ex-democracy at the mercy of one party?

Poland’s most popular homegrown rap artist, known as Taco Hemingway, foresees a bit of both, with Poland as a nation sharing the blame. His new song, “Polish Tango,” which was posted to YouTube just a few hours before the country’s election-advertising silence came into effect on July 10, laments PiS’s empowerment of integralist Catholicism, the coal-mining lobby, the anti-vaxxer movement, and anti-LGBT+ prejudice. Andrzej Duda’s reelection points to a complacency of the majority, raising the question of whether Poles—a politically impassioned people historically torn between multiculturalism and provincialism—are at least for the moment trying to have it both ways. After all, Poland may be less and less liberal, but it still compares favorably with Hungary, Russia, Turkey, and even the United States—and perhaps that is enough? Taco says: “I stopped believing in Poland a long time ago / So what do you believe in? / I believe in nothing.”