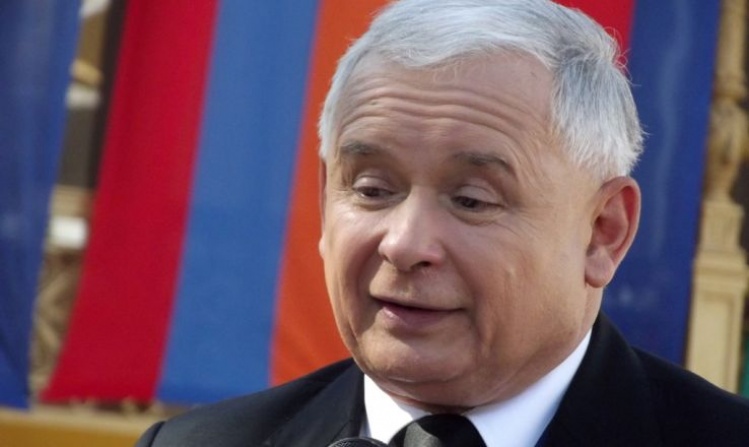 “We have a right to be afraid; we have a right to be scared.” So began the twenty-seven-year-old Polish priest Jacek Międlar, speaking this past fall on Poland’s Independence Day at a rally of self-described “young patriots.” Railing against Muslims, Jews, and “leftists,” Międlar insists that these groups all actively threaten Poland’s Christian heritage. The answer? A new crusade for “Great Catholic Poland,” with the cleric proposing “to fight for this heritage till every last drop of our blood is spilled.”

Międlar is not a powerful figure in Poland, but he represents a nationalist revival for which being Catholic and Polish implies also being anti-European, anti-pluralist, and anti-liberal. For the better part of a decade, young extreme nationalists have been making ever-larger showings at Warsaw’s annual Independence Day celebrations, scaring parents into keeping their children at home. But last October, in an election that has quickly proved to be a turning point in modern Polish history, the extreme right gained seats in the Polish parliament for the first time since before World War II.

In the 1980s, Poland captured the world’s attention when waves of strikes produced an independent trade union, which united opposition to the Communist regime under the banner of “Solidarity.” The first generation of non-Communist leaders whom Solidarity brought to power in 1989 promoted dialogue and reconciliation: between Catholics and Jews, Poles and Germans, former Communists and anti-Communists. John Paul II and the Catholic hierarchy played a major role in the transition to liberal democracy, and Poles hung on their pontiff’s every word for social and political guidance. The pontiff who had launched his papacy with the watchword “Be not afraid!” went to Poland’s Divine Mercy Sanctuary in 1997 and invoked 1 John 4:18: “There is no fear in love, but perfect love casts out fear.”

Yet, already in the early 1990s, political parties emerging from under Solidarity’s umbrella began to part ways with the union. As Poland built a capitalist economy and pursued membership in NATO and the European Union, successive governments accepted as inevitable that the transition would yield both winners and losers. Accession to the EU in 2004 brought a massive influx of capital that has disproportionately benefited western and central Poland. As has long been the case, there is a “Poland A” and a “Poland B”—divided politically, culturally, and socioeconomically—and the chasm between the two continues to deepen.

Five months after a relative unknown unseated the incumbent in the Polish presidential elections, his party—Law and Justice (PiS)—won a razor-thin majority in the new parliament. In the ensuing six months, PiS has used its hold on the executive and legislative branches to enact one law after another curbing civic freedoms. PiS has dramatically expanded the powers of the state security apparatus, imposed strict constraints on public media, and—after the Constitutional Tribunal, Poland’s high court, attempted to check their efforts—rewritten the rules of how the tribunal functions. In so doing, the government has provoked a constitutional crisis that has brought hundreds of thousands of Poles into the streets in peaceful protest. The Polish government has also drawn a reprimand from the Council of Europe, while the European Commission, the EU’s executive branch, has attempted to broker a compromise.

Meanwhile, the country’s attention is focused on PiS’s leader, Jarosław Kaczyński—a former prime minister whose twin brother, Polish president Lech Kaczyński, famously perished with ninety-five others in a plane crash in 2010. Kaczyński’s signature achievement is a brand of populist politics predicated on the notion that the Polish Third Republic, inaugurated with the collapse of the Communist regime, has been a mafia-like cabal. He rose to power briefly a decade ago, promising to create a “Fourth Republic,” to elevate the Catholic Church’s position in public life, to reinstitute Communist-era welfare guarantees, and—most provocatively—to expose the alleged skeletons in the closets of the Third Republic’s political and business elites.

Jarosław Kaczyński is undoubtedly one of Central and Eastern Europe’s most successful politicians. Having learned from PiS’s previous turn at government, Kaczyński has borrowed the well-honed tactic of Communist-era leaders: appoint a puppet prime minister, then run the country out of party headquarters. His political vocabulary is likewise reminiscent of Communist agitprop, with easy soundbites to answer every set of critics. Told that Poland is now betraying its European commitments, Kaczyński declares, “Sovereignty!” Accused of promoting intolerance, he answers, “We have to defend ourselves.” Told that PiS is dismantling the rule of law, he replies, “Ours is a democratic rule of law.” (Translation: Since the Constitutional Tribunal is not democratically elected, it deserves no role in a system of checks and balances.) And Kaczyński’s most famous epithet, for those protesting the government’s attack on the Constitutional Tribunal—”Poles of the worst sort.”

FROM AN INTERNATIONAL PERSPECTIVE, this strategy might seem familiar. Russian president Vladimir Putin has been a global trailblazer for authoritarian populism, and others have eagerly followed his lead: Turkish president Recep Tayyip Erdoğan, Hungarian prime minister Viktor Orbán, and even America’s own Donald Trump.

A country of 39 million, Poland is the region’s largest and loudest voice in the EU. In almost twenty years of NATO membership, Poland has established itself as the bulwark of NATO’s eastern flank, putting the country in the crosshairs of Russian-inspired conflicts in Georgia and Ukraine. Long before joining NATO, Poland became a dependable partner for American-led democracy promotion by the National Endowment for Democracy and George Soros’s Open Society Foundations. (Kaczyński recently impugned Soros’s work as “convenient for billionaires who have an easy time manipulating societies.”)

As recently as early 2015, Poland’s status as a beacon of liberal democracy seemed secure. This is why over the next month Poland will host two events of global importance: a NATO summit (July 8-9); and World Youth Day (July 25-31), led by Pope Francis. It would be hard to find a more symbolic pairing of events: NATO—a signature achievement of the older generations who shepherded Poland out of Communism; and World Youth Day, an event catering to generations that have no memory of the Communist era or its end.

It is Poles in their mid-thirties or younger whom the extreme nationalists seek to reach. The very age groups for which John Paul II founded World Youth Day are, in Poland, the farthest from building the “civilization of love” for which he called. To the children of “Poland B,” the window of prosperity shut too quickly, especially after 2008’s worldwide financial crisis. To young Poles angry about not finding upward mobility, refugees from the Middle East and Central Asia are “others” to be feared and kept out; mercy and love are not part of the conversation. It is difficult to imagine these Poles rejoicing at World Youth Day upon hearing Francis renew his call for Europe to embrace migrants.

The Polish bishops’ conference has unfortunately contributed to this disconnect between Polish youth and their pontiff’s message of solidarity and tolerance. The episcopate’s deputy head, in one of his first acts as archbishop of Łódź, liquidated the archdiocese’s flagship ecumenical initiative. In homilies, he has criticized lay Catholics who spread the teachings of Vatican II. And he has welcomed into Łódź’s main cathedral nationalists carrying banners with messages like “Death to Enemies of the Fatherland.”

Meanwhile, his former superior, Archbishop Józef Michalik, has all but openly endorsed PiS. Government critics who appeal to the EU are a “New Targowica”—a reference to eighteenth-century Polish aristocrats who supported Russia’s liquidation of the independent Polish-Lithuanian Commonwealth. The implication is that writing an email to Brussels is on a par with armed combat on behalf of Catherine the Great.

With bishops sending mixed messages, it is in the Committee for the Defense of Democracy (KOD) that multiple generations have found an outlet. Founded by a remarkable political outsider named Mateusz Kijowski—a long-haired IT specialist who prides himself on his motorcycle—KOD has combined extensive online networking with regular mass street protests. Rather than traditional political parties, it is KOD that organizes Poles in defense of the rule of law.

KOD is neither a party-in-the-making nor a single-issue movement. Its goal is ambitious: to protect and repair liberal democracy. As Kijowski puts it, “Right now, we must defend the foundations of the system, the very possibility of debating and discussing issues.”

According to Kijowski, “Politics in Poland is so weak precisely because people don’t get involved,” because “they don’t know how to communicate as a society.” KOD is “building civil society” by organizing regular public gatherings, online media, a think-tank, and a national civic forum called “A space of freedom, i.e. the kind of Poland we want.”

Of course, talk and rallies alone cannot build civil society. The greatest obstacle that KOD faces is the persistent divide between “Poland A” and “Poland B,” which PiS is working so hard to reinforce. With the government promoting divisiveness and intolerance, teaching society to communicate and organize itself becomes all the more difficult—and essential.

In the meantime, World Youth Day offers a one-of-a-kind test of the willingness of Poland’s younger generations to form bonds of solidarity with each other on terms other than illiberal or nationalist anger. These generations have the power to harness the civic ferment gripping Poland today. Given that so many Poles seem to have forgotten John Paul II’s exhortation against fear, Francis’s message of mercy and solidarity is precisely what Polish youth need to hear. The question is whether they will listen.