A Pentecost on Crete? 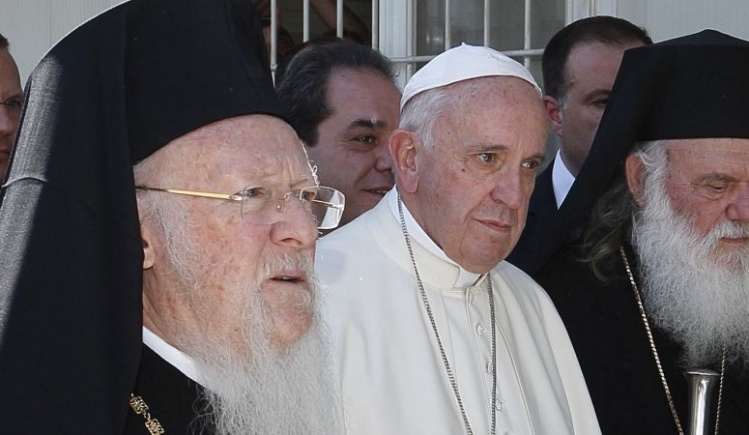 Pope Francis recently made headlines in the West by meeting with Orthodox Patriarchs Bartholomew and Kirill, and joining with them to address the refugee crisis. Far less attention has been paid to a different development that may have important consequences for the Orthodox Church and its relations with Rome: a historical, unprecedented “Holy and Great Council” to be held in June.

The novelty of this council, which will take place in Chania, on the Greek island of Crete, can hardly be overstated. The Orthodox world is made up of fourteen autocephalous Orthodox churches, which are in communion and dialogue with one another but have no official method of conclave. Orthodoxy has no presiding body or figure, no equivalent of a pope. Ecumenical Patriarch Bartholomew, Archbishop of Constantinople, is considered a first among equals, and he has certainly been an advocate for this council, but he has no final authority in insisting that other Orthodox churches attend, or in controlling the council’s outcome. Though many councils of local churches have taken place throughout history, the last time the whole Orthodox world came together in council was in 787—before the split between the Orthodox Church and Rome.

The preliminary agenda for such a council, which was drafted in the 1960s, included more than a hundred items. The agenda has since been condensed and winnowed in an effort to make it more palatable to the attending churches. Of the items that remain on the agenda, some of the more complex and potentially controversial have to do with the Orthodox Church’s relationship with other churches and with the rest of the world. For those of us in the Orthodox Church who would like to see it engage in open and loving dialogue with other Christian communities, including the Catholic Church, the preconciliar documents on this topic are disappointingly conservative. They reflect the concerns of an anti-ecumenical movement within Orthodoxy, which quails at any effort to repair relations with other churches for fear of dilution or contamination. Earlier versions of the preconciliar documents openly referenced the serious theological work that has been done by Orthodox theologians working with their peers in other Christian churches, but the approved version of the documents was silent on this subject.

The preconciliar documents on marriage and fasting are also disappointingly cautious. The marriage document shies away from difficult situations—like that of widowed priests, who are typically prohibited from remarriage—and presents a theology of marriage that is uneven at best. Part of the original purpose of the agenda item on fasting was to consider mission situations in which the available food and the local dietary habits are quite different from those of the Levant, where the Orthodox Church’s fasting regulations were first developed. Does it mean much to abstain from olive oil on certain days in a place where olive oil isn’t used? Instead of investigating these complicated situations, the fasting document simply provides an outline of the fasting restrictions in the Orthodox world—the kind one can find in the pamphlet corner of any Orthodox parish.

Then there is the matter of the council’s decision-making procedures. The guidelines indicate that “consensus”—the previously agreed upon standard for the council—is now to be understood as “unanimity.” This is worrisome to many, because it suggests that any one of the fourteen autocephalous churches might have veto power, which would be unprecedented. But it remains to be seen how this norm of consensus will be implemented.

The procedures of the council also dictate that the autocephalous churches each bring a delegation of hierarchs, who will make up the decision-making body of the council. Each delegation may also bring six “special consultants,” who can be clergy, monastics, or laypeople. Finally, observers from other churches will also be invited.

Though the role of the “special consultants” is limited, their presence at the council is significant because it allows not only non-hierarchs but women to participate in the council. It was recently announced that two women will be part of the Ecumenical Patriarch’s delegation. Exactly what level of participation these two women will be allowed is not yet known. Will they end up truly contributing to the work of the Council, or just witnessing it? Will their input be solicited for the council’s statement on marriage, or will that document be left entirely to celibate hierarchs? As Catholic Canadian Archbishop Durocher recently observed, real synodality must involve women. This is just as true for the Orthodox Church as it is for the Catholic Church.

EVEN THOUGH THE abbreviated agenda and modest preconciliar documents seem to portend a conservative, unambitious, noncontroversial council, many Orthodox Christians—myself included—will be pleased for the council to take place at all. If it can succeed on its own modest terms, it may open the door for future, less cautious councils. The Ecumenical Patriarch has stated that, if the Orthodox Church does not engage with the world, “it will be reduced to a ghetto on the margins of history.” There are many forces working to make the Orthodox Church more insular and fearful, but I agree with the Ecumenical Patriarch, and I see the Holy and Great Council of 2016 as a valiant effort to sustain the Orthodox Church’s mission “for the life of the World.”

Whatever comes out of this council, its lasting significance will be unknown for some time, because all Orthodox councils must be received by the faithful in order to be understood as legitimate and lasting. Even the Ecumenical councils were not called “Ecumenical” or understood to have universal significance while they were taking place.

As I look forward to next month’s council, I remember the Orthodox icon of Pentecost, which shows the Mother of God with the disciples. They are not alone; the Holy Spirit is also present—sometimes pictured as a dove, sometimes as tongues of fire. Mary and the disciples are often shown gazing up, open to the work of the Spirit. It is a fitting image for a church council. One hopes that all those attending the Holy and Great Council will be animated by a truly Pentecostal openness, and that they will remain aware that they are not alone in their efforts.

The Sacrament of Love