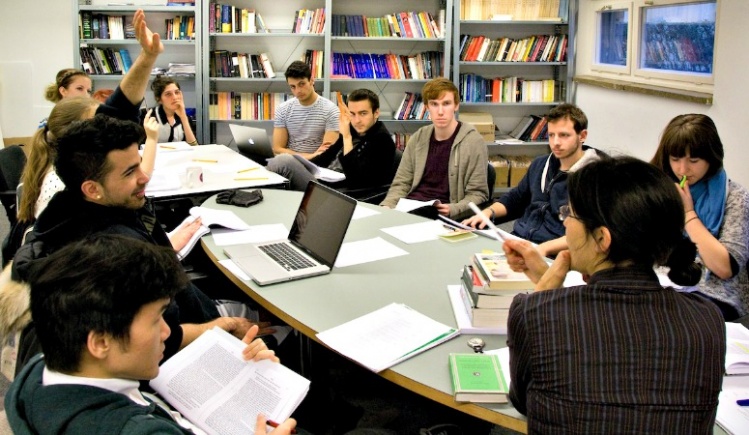 I had just started teaching at Brooklyn’s Kingsborough Community College as Barack Obama neared election in the fall of 2008. Nationally, there was much excitement among the political left about the prospect of his becoming president. Among my black and brown students, however, opinion was varied.

“Finally, we will show the world that black men are not all in prison or deadbeat dads,” said Monique, an African-American mom from Bedford-Stuyvesant and a student in my English composition class. “We can point to Barack Hussein Obama and say ‘Look! We have a black president, with Muslim and African names. We have gone way past the civil-rights movement.’”

Tyroy, a lithe Jamaican in dance-hall chic who never bothered to take his headphones off in class, scoffed. “Obama’s just another Ivy-League dude.”

“Yes,” agreed Ousmane, a preppy marketing major from a wealthy Senegalese family who didn’t believe in evolutionary biology or climate change. “But that’s okay. The poor are lazy, so they get what they deserve.”

In truth, the ambivalence of my students—from Africa, the Caribbean, and the United States—toward the possible election of the nation’s first African-American president surprised me. I assumed they would see it as an historic step away from a history of oppression, even if the social situation of American blacks still left much to be desired.

IN HIS 1968 book, Pedagogy of the Oppressed, Brazilian educator Paulo Freire, now widely seen as the father of critical pedagogy, presented a Marxist critique of colonialist education that excoriated its “banking model,” in which students are empty vessels to be filled with information, rather than as “co-creators of their own knowledge” who engage in dialogue with their teachers and peers. Freire sought to help students understand the effects of authoritarianism on their lives so that they could actively combat it. Because, generally, only educators read his work, I sought to introduce Freire’s thought to my students indirectly, through other texts that critique oppression. But I didn’t expect the reaction I got.

Tyroy seemed to feel that trying to combat authoritarianism was a lost cause. He was so jaded about his own lack of privilege that he had no faith in the possibility of real agency for the disenfranchised. “I’m sure that even if I voted,” he said, “they’d find a way to not count it.” Ousmane, on the other hand, felt the elite were entitled to their power and status and was concerned mainly with maintaining that of his family.

What both students had in common was their reason for attending Kingsborough: their parents made them do it. Tyroy was studying liberal arts as a default major; his real interest was in becoming a video-game designer. Ousmane wasn’t trying very hard to learn English. They wanted to get their degrees, get out into the world, and start making money. They certainly weren’t interested in being “co-creators of their own knowledge,” or in grappling with questions of equality for themselves, their communities, or the world at large.

Some of my students, like Monique, saw me as a success: a college professor with a PhD, well-traveled, commanding authority. To others, like Tyroy and Ousmane—the latter of whom drove a white Mercedes SUV—I was a loser, a broke white guy spending all his time grading papers they put barely any effort into. Tyroy may have been poor and Ousmane rich, but their worldviews were the same: They saw no point in opposing the status quo. And I’ve seen many other students who share that view.

For instance, two African-American women, one dressed for business, the other dressed casually, are walking down a Kingsborough hallway. I overhear the latter talking about the discussion of John Rawls’s Theory of Justice in her philosophy class. The one in business attire cuts her off. “Wait a minute! Stop! We’re equals now, but not if you get all fancy on me!” That is to say, “getting fancy” is about having ideas that are too sophisticated for one’s station in life. Were the philosophy student talking about a low-level job in business, that might be acceptable, but being interested in social justice is not. Social justice never comes; the only way to get ahead is financially.

But if this is so, the question that arises for me is how to keep students who, broadly speaking, would fit into Freire’s category of “the oppressed”—new immigrants, minorities, the poor—from becoming the oppressors. How do you get people who have had very little materially to be concerned with the social problems that are the root causes of discrimination against them, and not merely the symptoms, such as lack of money? How does one do this when they don’t have faith in participatory democracy, when they don’t see how—or care that—specific government policies and business practices further entrench inequality, both locally and globally?

WHILE THE FIELD of critical pedagogy has sometimes been faulted for being too Marxist, or just too idealistic, Freire’s critique of “banking education” seems even more relevant today than it was in 1968. Then, students weren’t hooked on the steady supply of dopamine delivered by their smartphones; higher education wasn’t running on corporate models in which competition for customers is primary. In many ways, the onus is now on educators to cater to student desires, rather than on students to impress their professors. So how to cut through the entitlement or ambivalence of students and get them to see the connections between economics and ethics? One way is to introduce them to texts that highlight different forms of inequality and encourage them to rethink their working assumptions.

One that I teach, Michel Houellebecq’s 1998 novel The Elementary Particles, is an extended critique of the legacy of the ’68 generation. It argues that the supposed humanistic advances of the hippie revolution led only to more oppressive and vapid forms of consumerism, particularly under the economic policies of the Ronald Reagan and Margaret Thatcher. While some of my more conservative students are shocked by the graphic sex tourism in the novel—interestingly, the ones who wear headscarves less so than the born-again Christians, Seventh-Day Adventists, and Jehovah’s Witnesses—Houellebecq’s portrayal of ethically adrift 1980s and ’90s popular culture resonates with them.

Similarly, The Road of Lost Innocence, the 2008 autobiography of Cambodian activist and former sex slave Somaly Mam, informs them that twice as many people live in slavery today as were taken from Africa during the three centuries of the trans-Atlantic slave trade. Learning that the price of a slave, in today’s dollars, has dropped from about $40,000 in 1850s America to a 2010 global average of $90 helps students understand the economic shifts in globalized oppression—and that slavery is not a thing of the past.

And discussing climate activist Bill McKibben’s Eaarth: Making a Life on a Tough New Planet (2010) sheds light on why we now say “climate change” instead of “global warming” (warmer air holds more moisture and thus creates irregular weather), and how the people of the global south suffer first and most when climate-induced natural disaster strikes.

After reading and discussing Houellebecq and Mam, Tyroy began to ask questions: “What’s deregulation?” and “Are some of those Chinese ladies in the massage parlors slaves?” Reading McKibben got Ousmane thinking about where human beings may have come from and where they may be headed. “I heard that the Museum of Natural History has a whole exhibit about apes and humans. Is that worth checking out?” These were questions that surprised even me, questions not directly related to the texts, but showing extrapolation of their contents. Indeed, they were the kinds of questions I wish I could get out of every disaffected student.

I AM NOT OUT TO change students’ minds about their deeply held personal beliefs. Do I have anything against students studying business and marketing? Certainly not. Need all of them feel passionate about the election of minority candidates? That would be unrealistic. What I am after is their greater awareness of the various forms oppression can take. It is a word that sounds more hyperbolic now than it probably did in 1968, and yet living in a single globalized financial system built in large part on debt is indeed oppressive for most of the world’s population, regardless of their ethnicity. Perhaps first and foremost, I would like my students to understand this.

In all honesty, I’m not even wedded to the idea of students like Tyroy and Ousmane getting their associate’s degrees. They may blossom in my classroom or in someone else’s. But they may also be wasting their time and their families’ money. While completion of a higher degree is generally seen as financially advantageous, I have occasionally told students that college is not for everyone, that some of the smartest and most successful people I know—even in my own family—didn’t attend or finish college. Some people can’t handle the restrictions that college places on learning, the over-categorization of highly specialized majors. (Some, like my daughter, already find such strictures frustrating in grade school.) For those students, it might be better to engage in dialogue with others outside the classroom, better to think for oneself, better to do—that’s the freedom that education theoretically gives you anyway. The point of college is not about amassing information so much as acquiring discernment. And Tyroy and Ousmane seemed to be getting that, although I don’t know whether they disappointed their families by dropping out of school.

College, at its best, helps students question constructively, to start to understand the larger structures that govern their lives—not to reject ideas out of hand, out of ignorance, out of preconceived notions, but rather to listen, to break things down, to gather a little more information, to try to form a slightly more nuanced opinion. Would I like them to make it out of freshman composition and their basic math courses? Yes. But perhaps more importantly, I want to break them out of some of the ways of seeing that are second nature to them. To see in more ways. To understand how to act, instead of react. That is the difference between mere reflex and deliberate action. If I can do that, then I have done my job—even if it means not every student will be there with me.