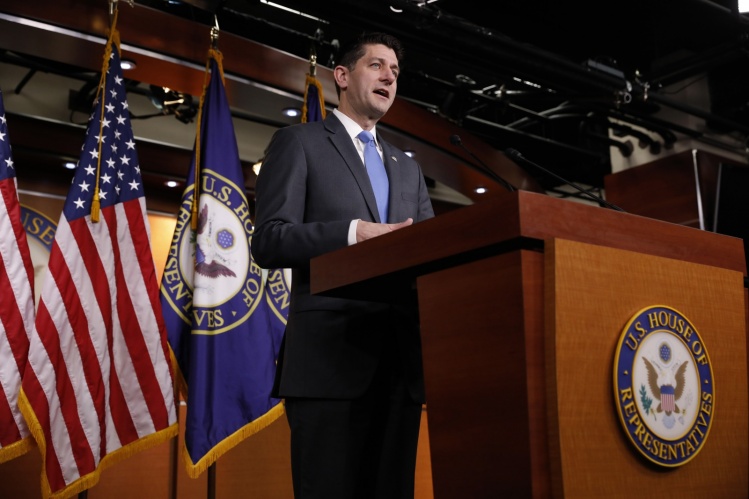 House Speaker Paul Ryan, R-Wis., a Catholic, addresses a news conference April 11 on Capitol Hill in Washington about his announcement he will not seek re-election in November. (CNS photo/Aaron P. Bernstein, Reuters)

Paul Ryan started his political life hoping to be the champion of a sunny, forward-looking conservatism. He will step down from the House speakership as the personification of conservatism’s decline.

One is tempted to call Ryan’s journey tragic, the tale of a young, idealistic family man transformed into an enabler for the most morally indifferent and utterly selfish president in our nation’s history.

Yet tragedy often implies a protagonist who suffered because of forces beyond his own control. Ryan is very much responsible for the fix he and his party are in. This is why he had to push back against suspicions that he is leaving before a political deluge engulfs House Republicans this fall.

Ryan has been driven by two priorities throughout his career: slashing taxes on the best-off Americans and eviscerating social-welfare and safety-net programs in the name of “entitlement reform.” Whatever advanced these objectives was worth doing.

In announcing his retirement from Congress on Wednesday, he was thus reduced to repeating four times in response to questions that he was “grateful” to President Trump for creating the opportunity, as Ryan put it at one point, “to actually get this stuff done.”

The “stuff” the speaker was obsessed with included a corporate tax cut that ballooned a deficit he has made a career out of denouncing. Despite Ryan’s rhetoric, deficits never counted for him if they were created by showering money on the country’s privileged sectors.

At his news conference, Ryan was required by journalists to acknowledge the trillion-dollar annual budget holes that a supposedly conservative Congress and administration have helped create. He reiterated his stock response, mourning that the Senate never approved his plans to cut Medicare, Medicaid, Social Security and food stamps, which is the policy translation of the bloodless phrase “entitlement reform.”

Despite Ryan’s rhetoric, deficits never counted for him if they were created by showering money on the country’s privileged sectors.
sharetweet

The many in Washington who personally like Ryan often wonder how he could so readily cozy up to Trump and empower House members—notably Intelligence Committee Chairman Devin Nunes—who have turned themselves into propagandists for Trump’s desperate quest to escape accountability.

The answer lies paradoxically in Ryan’s idealism, rooted in his youthful fascination with the philosophy of Ayn Rand. She identified with society’s winners and regarded ordinary citizens as moochers and burdens on the creative and the entrepreneurial.

Although Ryan gave warm speeches about compassion, his biggest fear was not that the poor might go without food or health care but, as he once said, that the “safety net” might “become a hammock that lulls able-bodied citizens into lives of complacency and dependency.”

He later backed away from Rand and acknowledged that the hammock was “the wrong analogy.” But his policies suggested that he never abandoned his core faith: If the wealthy did best when given positive incentives in the form of more money, the less fortunate needed to be prodded by less generous social policies into taking responsibility for their own fate.

Given where Ryan’s passions lie, it is unsurprising that he would prop Trump up as long as the president was willing to embrace a modern-day Social Darwinism that married efforts to repeal the Affordable Care Act with reductions in government’s impositions on the managers and owners of capital. The retiring speaker really does believe that this is the path to the good society. To pursue it, he’ll take help wherever he can get it.

If Ryan has presidential ambitions, he is certainly wise to walk away now. The House Republican majority and Trump himself may well be wrecked by the president’s unscrupulous impulsiveness. Ryan’s departure will not only give him time with his family—those who know him see the politician’s proverbial excuse for leave-taking as having reality in his case—but also the opportunity to try to cleanse himself of the stain left by a low and dishonest political moment. In 2024, he will be just fifty-four.

Yet he has been propelled to the exits because his sort of conservatism hit a dead end. It’s why we have Trump, and why Ryan was forced to acquiesce to a man whose statements he once condemned as racist and whose personal life is the antithesis of his own. This is the part of Ryan’s legacy he’ll have great difficulty living down.