In Paradise: A Novel 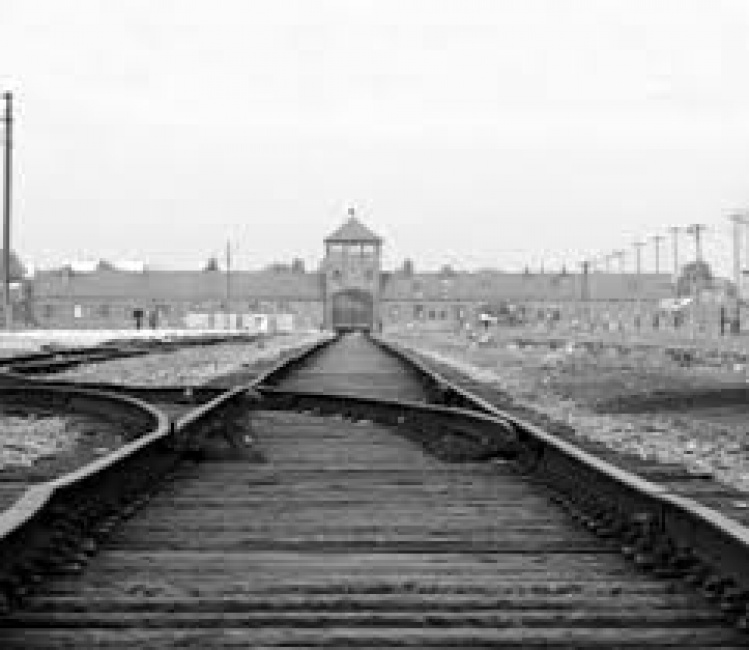 On the dust jacket of In Paradise is a photograph of forking railroad tracks that disappear into a sooty fog. Ahead, and unseen, are the ramps where Jews and others destined for the ovens of Auschwitz were off-loaded. To this bleak place Peter Matthiessen, along with more than a hundred others of various nationalities and faiths, came in 1996 to meditate, pray, and bear witness to the atrocity that had taken place there. In Paradise, Matthiessen’s final book, is his meditation on this experience. Matthiessen, who died last year, was among the most spiritual of the American writers born between the two world wars, his writing often reflecting the teachings of Buddhism. But are spiritual epiphanies proper, or even possible, in a death camp?

The setting of In Paradise is in some ways a significant departure for Matthiessen, whose stories often take place in the disappearing natural world. In Paradise travels to the heart of the modern state, to the hard, lifeless concrete out of which were built the windowless walls and ceilings and floors of the crematorium, as well as the blockhouses and mess halls of the SS. On one wall of the camp a child has scrawled the words “No butterflies live here.”

The main character of the novel, Clements Olin, is a stand-in for Matthiessen. An American professor of twentieth-century European literature, Olin joins the gathering at Auschwitz only because it allows him to pursue interests of his own. Only slowly is he drawn into the activities of the retreat, as aggrieved Jews confront guilt-ridden Christians, while Buddhists look on and secularists blandly repeat familiar points borrowed from anthropology, psychology, and sociology, as they struggle to explain to themselves how such a thing could ever have happened. Two European writers are particularly important to Olin: Tadeusz Borowski, a Polish survivor of the death camps at Auschwitz and Dachau who wrote the disturbingly sardonic This Way for the Gas, Ladies and Gentlemen before committing suicide in 1951 at the age of twenty-eight; and Anna Akhmatova, the Russian poet who lived through the terrors and stark privations of the Russian Revolution and the Stalinist state in her native St. Petersburg. These two writers are important to Matthiessen as well. In Paradise aspires to Borowski’s refusal of sentimentality and to Akhmatova’s continued discovery of life and joy amid the most terrible conditions. Both aspirations end up leading the book astray.

The dangers of dishonest sentimentality notwithstanding, any response to the Shoah that refuses to engage the reader’s sympathies ends up perpetuating a dehumanized worldview that made such atrocities possible in the first place. The error, then, is not that In Paradise does finally make an appeal to the reader’s heart, but that most of the book tries so hard not to. The spiritual failure of In Paradise—its failure to achieve Akhmatovian joy—is another matter. The book’s finest spiritual moments come in passages that describe Jewish practice—Kaddish and shofar, Old Testament laments and hopes—but these moments are few. More time is given to the ineffectual spiritual efforts of the Christian participants, particularly two novice nuns and the priest supervising them. The Buddhists are mostly relegated to the sidelines, given less prominence than even the secularists. Still, the spiritual epiphany Matthiessen wishes to communicate reflects his Buddhism, and it comes at the expense of the real-life retreat’s ecumenism. The novel’s moral message, conveyed by its deliberately paradoxical title, is both smugly superior to Catholicism (Protestant Christianity is scarcely present) and dismissive of Judaism. Speaking to one of the nuns, Olin quotes her namesake, St. Catherine of Siena: “All the way to heaven is heaven.” He then shifts, more darkly, to the moment on the Cross when Christ says to the good thief, in reply to his request that Christ take him to paradise, “Thou shalt be with me this day in paradise.” Christian readers, who know that Christ himself does not go directly to paradise, are challenged to consider in what sense the good thief will spend that day both on the cross and “in paradise.” But Olin seems to think the paradox isn’t sufficiently conveyed by the Gospel account, and so he substitutes a gnostic version in which Christ says “No, friend, we are in paradise right now.” Matthiessen’s fictional nun only stares dumbly as Olin explains, “No hope of heaven, no Trinity, no Resurrection. All creation right here right now.” The nun only replies, “This not our idea of things,” and walks away.

But Matthiessen must have known that a better Catholic response is available. The apocryphal “no” transforms Christ’s words into something like a Buddhist koan on the necessity of transcending worldly suffering through detachment rather than hope. Nearly fifty years ago, Thomas Merton probed more deeply into the differing Catholic and Buddhist responses to this very passage of Scripture. Meditating on Christ’s paradoxical reply to the good thief, Merton wrote in Zen and the Birds of Appetite (1968), “Paradise is not ‘heaven.’ Paradise is a state, or indeed a place, on earth. Paradise belongs more properly to the present than to the future life.” At the center of Buddhist meditation, Merton observed, is nothingness. At the center of the Catholic mystic’s meditation, by contrast, is the presence of Christ. This presence does not replace heaven or the hope of heaven; it is heaven’s “antechamber.” Merton thus affirmed St. Catherine: all the way to heaven is heaven. The believer depends on the presence of God as she moves toward her ultimate goal.

But both versions of paradise, the Buddhist and the Catholic, may sound extraordinarily offensive in the context of Auschwitz. Should the millions who suffered and died in the death camps have realized that they were nevertheless in paradise because suffering is only the product of attachment to the world, as Buddhism teaches? Or should they have realized they were in paradise because Christ was with them? Maybe Matthiessen is thinking not of those who suffered in the death camps, but of his fellow retreatants and, by extension, his readers. How are we to live in a world where something as terrible as the Shoah has taken place? Though the book’s title comes from the exchange between Olin and Catherine, its spiritual epiphany appears in a long section titled “Dancing at Auschwitz,” in which a number of the retreatants do just that. This is supposed to be the moment of Akhmatovian joy—a joy, which in the words of the book’s epigram from Akhmatova, “is, and always has been, wild in our breasts.” I don’t know whether such a dance actually took place at the nonfictional retreat, but the fictional scene is not convincing, and for the novel to work, it needs to be. Much better, and much more in keeping with the author’s gifts, is a small moment at the site of the crematorium when Olin comes upon “heart-shaped prints of a small deer [that] traverse new snow on the tilted slabs of collapsed concrete.” Unlike the dance, this seems entirely real, whether Matthiessen borrowed it from his journal or imagined it. This is a true Akhmatovian moment.

But it’s not enough. The railroad tracks on the book’s dust jacket ask for something more than moments of spiritual transcendence. They extend into an ominous, unseen future, and any spiritual response to what they represent must address the future, not just the past or the present. Both Peter Matthiessen and Thomas Merton offered their resistance to these steel rails by the lives they chose to live—Matthiessen by traveling to those places the modern world has not yet overwhelmed, Merton by traveling to just one such place in rural Kentucky and, for the most part, staying there. But the world of Auschwitz, embalmed in concrete, where human beings were tattooed with numbers and transformed into things, challenges us to greater acts of resistance. It requires us to remember—to insist—that the world is God’s creation and not our own, and that all people, including those unlike ourselves, are created in the image of God. They are never just things. We have forgotten this before; without vigilance, we could forget it again.