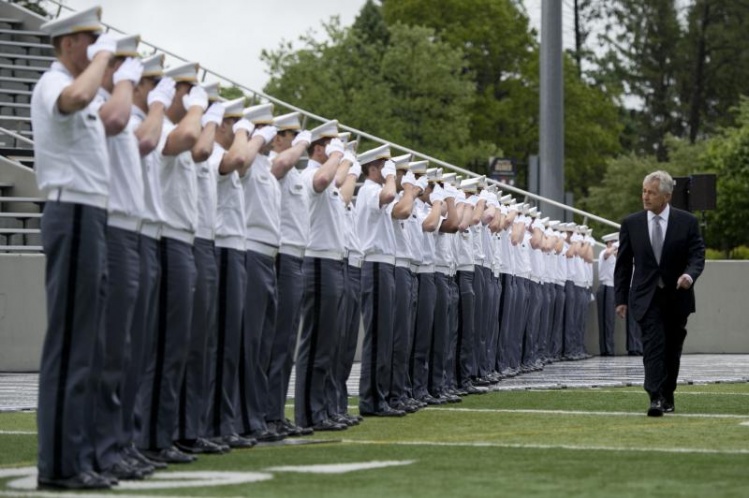 At the West Point I attended well back into the previous millennium, Elizabeth Samet would have constituted a subversive presence on the academy faculty. Of course, in those days she would never have received an appointment to teach cadets, being doubly disqualified as a civilian and a woman.

Back then, with an all-male corps of cadets taught exclusively by active-duty officers, the academic curriculum was narrow and highly prescriptive. Encouraging inquiry took a back seat to answering questions, free thinking to recitation. “Speck” and “dump” were colloquialisms commonly used to define the learning process. A classmate recently told me that seeing the movie Whiplash, with its sadistic music teacher portrayed by J. K. Simmons, reminded him of our days at West Point. An overstatement, but I got the point.

That was back in the 1960s. Since then, things have opened up some and for today’s cadets having a teacher with Samet’s nurturing qualities—the very inverse of the J. K. Simmons character—must surely rank among the benefits. Yet my guess is that as a professor of English she remains a subversive. Her quiet insistence that literature—not mathematics, engineering, political science, or beating Navy in football—offers the proper grounding for the aspiring military professional must surely rankle those devoted to tending the flame of tradition.

This book, a sequel to the author’s well-regarded Soldier’s Heart (2007), is an amalgam of memoir and meditation. As memoir, it ruminates on Samet’s experiences teaching cadets in an era of seemingly perpetual conflict. That temporal space defines the no man’s land to which the title refers, “a peculiar world, full of hazard, doubt, and deceit.”

When Samet’s students graduate, they become “war commuters,” sent to wage wars that begin, slacken, escalate, and may seem to end, but then resume, their defining feature an absence of definition. She cares deeply about the fate of these young men and women. “The soldiers I know,” she writes, “form the core of my emotional life.” None of those soldiers return home unaffected by their experiences. Some simply do not return.

As meditation, No Man’s Land has a meandering, discursive quality. But the careful reader will discern two specific themes. Samet has bones to pick, one with American society, a second with the Army itself. Both, she believes, have failed the former students to whom she remains devoted.

We, the people, pretend to care about soldiers but actually don’t, Samet believes. She derides the “theater of gratitude” with its “histrionic gestures” intended to convey a collective sense of appreciation. The phrase “Thank you for your service” becomes “a mantra of atonement,” absolving the speaker of responsibility. “The objects of a public’s simultaneously overheated and fleeting regard,” soldiers find upon closer examination that this regard is mighty thin on substance. Others before Samet have made this point, but seldom with such eloquence and carefully modulated anger.

Her second theme strikes me as more original and therefore more important. The unbloodied professor with her fancy Ivy League degrees presumes to suggest that the army doesn’t understand war and is therefore clueless about how to prepare young people for the responsibilities of officership. At first glance, this seems pretty brash. But given the Army’s rather fitful performance of late, she just might be on to something.

The essence of Samet’s argument runs like this: War is never, ever what you expect it to be; every instance of war offers its own unique form of chaos. Here Samet quotes the journalist A. J. Liebling to great effect. Regarding a collection of his reporting on World War II, Liebling observed: “I have been advised to write an epilogue to this book to ‘give it unity’...but I find this difficult, because war, unlike drama, has no unities, classical or otherwise.” To imagine, therefore, that war can be tamed or controlled or, worse still, reduced to a formula is a vast delusion.

By extension, to assume that inculcating an identifiable set of attitudes, habits, and skills provides an adequate preparation for war is to do a tremendous disservice to those sent to fight, especially in positions of leadership. Yet that very assumption constitutes West Point’s abiding raison d’être.

Samet offers a contrary view, one corroborated by writers such as Tolstoy and Clausewitz whom she cites approvingly. That view posits that among the many perquisites for successful wartime leadership a capacity for creativity ranks near the top, with the demand for creativity increasing as responsibilities become greater.

Training does not inculcate creativity. Its whole purpose is to enforce conformity, binding rather than liberating. At West Point (along with the Army as a whole), as Samet correctly observes, training has acquired a “ritual, almost sacral dimension.” If you’re not fighting, you ought to be training. Anything else and you’re wasting your time. In this context, what the army calls TTP—tactics, techniques, and procedures—has achieved a status akin to that of a holy trinity.

That the American troops sent to Iraq and Afghanistan were well-trained, as they indubitably were, represents a non-trivial achievement. Yet unanticipated challenges caught the officers charged with leading those troops completely by surprise. Over the course of the past decade and more, efforts to respond to those challenges have fallen woefully short. “What seems most sorely lacking,” Samet writes, “are imaginations bold enough to anticipate a future that may look nothing like the past or remarkably like some forgotten past.” Imagination holds the key, plus “the need to prepare to be unprepared so you can draw on what you really need when you need it.” As a pointed and pithy description of the essential flaws of contemporary American military leadership, that’s about as good as it gets.

Samet dares to proffer a solution: increased emphasis in officer development programs at West Point and elsewhere on the study of literature, broadly defined to include not only poetry, fiction, and drama, but also movies and history. Within this realm, she contends, lies the possibility of fostering creativity. In effect, Samet suggests a second trinity, not to supplant but to complement the first. Call it SSP—Shakespeare, Simenon, and Plutarch—those figures merely suggestive of the broad range of works she believes have something to teach about war, leadership, and, not so incidentally, what it means to be human.

Coming from an English professor, Samet’s critique is unlikely to garner serious attention either from the hierarchy at West Point or in the military as a whole. Samet herself knows that. In such quarters, she writes, “the prospect of unleashing the forces of the imagination seems more intimidating...than unleashing massive firepower.” Sadly, she’s probably right. And that’s too bad.