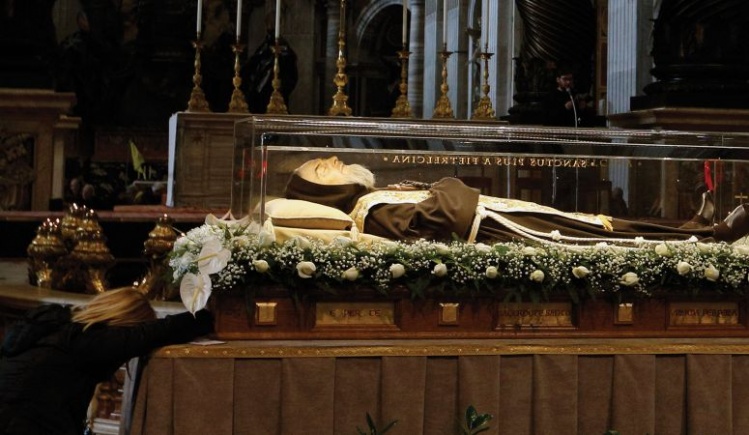 In February the bodies of two long-dead Catholic saints, the extraordinarily popular Padre Pio and the lesser-known Padre Leopoldo, were driven across Italy, and then paraded through the streets of Rome in glass coffins for viewing and a Mass in St. Peter’s Basilica. Pope Francis is a big Padre Pio fan, and wanted the veneration of the saint’s remains to be one of the highlights of this Jubilee Year of Mercy, with its emphasis on the forgiveness of sins. The Capuchin friar, famous for bearing the stigmata, was a world-class marathoner when it came to hearing confessions, which he did for hours on end, day after day, year after year. He was supposed to possess an uncanny ability to divine what sins were burdening a penitent’s soul, which doubtless kept the line to the confessional moving. Graham Greene and his mistress, the story goes, once attended Pio’s early-morning Mass, but declined to visit the confessional afterwards. When it came to certain sins, the author of The End of the Affair notoriously did not possess a firm purpose of amendment.

The photographs of the event accompanying a story in the New York Times were dramatic. One captured the religious procession, led by a phalanx of priests, crossing a bridge over the Tiber on its way to the Vatican. Tens of thousands were reported to have followed along. The other was a close-up of Padre Pio’s corpse being carried aloft in its glass case by devotees. It was a startling image: the body dressed in a Capuchin habit, the head resting on a tasseled golden pillow, the small, slippered feet splayed apart.

What is it that compels people to gather around a desiccated corpse? Pio died in 1968, and in 2008 his body was exhumed and put on display in San Giovanni Rotondo in Puglia, the southern Italian town where he lived most of his life, and which became a pilgrimage site for millions during his long life. The remains were fitted with a creepy silicone replica of the friar’s bearded face, which looks quite life-like, at least from a distance. Pio is Italy’s most popular saint, a miracle worker who has supposedly interceded on behalf of thousands.

I have my doubts about Padre Pio’s supernatural powers (bilocation!), as did the church. The authenticity of his stigmata was only grudgingly accepted by church officials, and suspicions that the wounds were self-inflicted, or psychosomatic, dogged the friar. Pio, who was not a learned man (no obstacle to sanctity, to be sure), was also linked to fascist groups in the 1920s and ’30s. Popular Catholic devotions have often been co-opted by reactionary political forces.

Nevertheless, I confess to having a weakness for—or at least an appreciation of—the sort of popular Catholic piety that finds something powerfully meaningful in parading the bodies of dead saints, suitably attired of course, through the streets. Such devotions did not, I hasten to add, figure prominently in my deracinated Catholic upbringing. Our friend and Vatican correspondent Bob Mickens, the editor of Global Pulse, does not share my forbearance in this regard. “What I find so distasteful, wrongheaded, and sort of bizarre is parading these things under glass boxes,” he told the Times. “This is like Lenin’s Tomb, for God’s sake.”

On that point I respectfully dissent. From its very founding, the church has embraced the veneration of relics, including the bodies and body parts of the dead. For centuries, Catholics built churches over the dead. Catholicism is, after all, a religion that claims the course of history has been irrevocably altered because of the death of one man. Death and resurrection are at the very core of what we profess. And we’re talking about the resurrection of the body, not merely the survival of an immaterial soul. As the historian Peter Brown has reminded us, the cult of the saints was a fundamental and defining belief for early Christians. In the ancient Roman world, the dead were kept outside the city. Christians brought the bodies of the saints into their churches, touching and kissing their very bones. It was a powerful way of forging a relationship and a bond between the living and the dead, making heaven present, even palpable.

Bizarre? Sure. I’m as squeamish as the next person when it comes to dead bodies. My first reaction to the photos of those crying and touching Pio’s glass coffin is to scratch my head in wonderment. But is it bizarre because we have a more “rational” understanding of suffering and death, or because we have banished the dead from our homes, our neighborhoods, our lives, and increasingly from our thoughts? Perhaps that absence is what is bizarre. Lenin’s tomb is a monument to a deadly (and dead) worldly certitude; Padre Pio’s glass box affords a glimpse of another world, or so one may hope.

Popes in the City