'Once in a Great City' 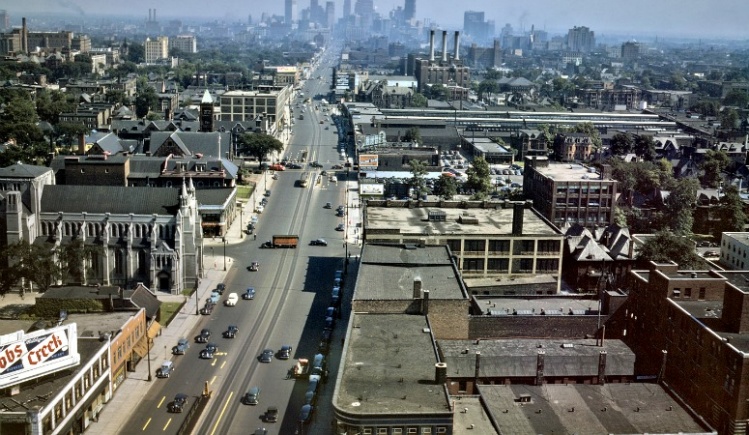 David Maraniss’s book on Detroit examines just eighteen months in the city’s history, from the fall of 1962 until spring 1964. “I wanted to illuminate a moment in time when Detroit seemed to be glowing with promise,” he writes, “and to appreciate its vital contributions to American life.” Detroit did seem to be booming then. 1963 was a record-setting year for domestic auto sales, the city had just elected a dynamic young reform-oriented mayor, new construction—some of it architecturally distinguished—was enlivening the rather staid downtown, and Motown hits were topping not just the historically black rhythm and blues charts but the white-oriented pop charts as well. (Many of Motown’s superb musicians were products of musical training in the local public schools.) My own memories of that time in Detroit are rosy, probably in good part because of my youth. But I can clearly recall the excitement of traveling on my own around the city—on public transportation, yet!—and discovering such assorted joys as Lebanese bakeries, Flemish paintings at the Art Institute, and the foreign-language reading room of the downtown public library, where ancient Russians kept up with news from home. Compared to my dull suburban habitat, leafy and green though it was, Detroit pulsed with adventure.

Detroit pulses with adventure for Maraniss too, although his family left the city when he was not yet seven. “I’d never thought of myself as a Detroiter,” he confesses. Nor is he a fan of the “ruin porn” that draws visitors these days to a city in radical decline. What fascinates Maraniss is why Detroit matters, why its story is so central to the broader course of American history. The city was a principal birthplace of the nation’s industrial union movement, along with the industry that produced what was arguably its most iconic product—the automobile. It was a locus of Northern civil-rights activism and, with the rise of Motown, the site of one of the nation’s great black success stories. Perhaps most important, Detroit was a place where manual workers could live like members of the middle class, owning single-family homes and sending their children to college. “This city and its people are the herald of hope for America,” Lyndon Johnson declared in 1964—and politician though he was, I think he meant it. Where else in the country had the seeds of New Deal liberalism flowered so extravagantly?

The New Deal was notoriously unproductive when it came to civil-rights legislation—an omission that Johnson was in the process of remedying—and Detroiters of all stripes were coming to realize by 1964 that their city was dangerously divided by race. But the prevailing mood was nonetheless upbeat. Jerome Cavanaugh had been elected mayor in 1961 with significant black support and he moved swiftly to expand black access to city jobs. Under his leadership, Detroit would be a principal laboratory for various anti-poverty programs sponsored by the Johnson administration. A booming auto industry made for unusually high incomes among African Americans locally, who were also beneficiaries of surprisingly strong, if highly segregated, public schools. The local white elite generally favored civil-rights legislation, at least at the national level, and whites as well as blacks turned out in record numbers when Martin Luther King, Jr., led a march in Detroit in June 1963, where he delivered a first run of his “I Have a Dream” oration. That white kids in the suburbs were suddenly dancing to the very same songs as their black urban counterparts—thank you, Motown—seemed to herald a bright new day of racial understanding. Those songs were sweet in more ways than one.

Maraniss explores this golden time in what might, for non-Detroiters, be excessive detail. Motown, the local Mob, the auto industry (especially the introduction of the Ford Mustang), the labor movement, the rise and fall of local landmarks (some of them obscure)—all are grist for his finely grinding mill. We meet numerous individuals, both the well known and those of more ordinary stature. Even non-Detroiters will be delighted to learn about Esther Edwards, eldest sister of Motown founder Berry Gordy Jr., who taught aspiring Motown stars particulars of dress and conduct that Emily Post would surely have endorsed. (When brother Berry, an indifferent student, despaired of meeting their father’s expectations, Esther gave him a copy of Rudyard Kipling’s “If” and had him memorize it.) Or the Rev. C. L. Franklin, once a household name among blacks as a preacher but best known today as the father of the redoubtable Aretha. Maraniss also manages to cast a fresh eye on a unwieldy cast of the famous, among them the aforementioned Martin Luther King and Lyndon Johnson, but also labor leader Walter Reuther, Henry Ford II, and Lee Iacocca. Still, multitudinous details do sometimes overwhelm the narrative. As a former Detroiter, I was intrigued to learn that Mayor Cavanaugh kept thirteen striped ties in his office as a form of costume-change insurance. A non-native would presumably be less intrigued.

WHAT GIVES Maraniss’s book, details and all, its undeniable fascination is the reader’s awareness of Detroit’s eventual collapse. As in a Greek tragedy, the audience knows the terrible future while the characters on stage do not. And as in a Greek tragedy, the script abounds with cues that point toward the awful denouement—cues that are typically ignored or misread by the drama’s protagonists. Detroit had been losing white population since the later 1940s and the outflow did not cease during the prosperous months that Maraniss chronicles. Demographers at Wayne State University predicted in 1963 that the city would lose fully one-quarter of its current population by 1970, with the losses coming mainly from among the younger, better-educated, and more affluent. Losses like these would lead in short order to a chronic fiscal shortfall. Crime rates were rising, too. I may have coursed about the city as a teenager but I had classmates whose parents would not allow them to go downtown. Partly because of the increase in crime, tensions between the mostly white police and black citizens were escalating. Despite record sales in the early 1960s, the domestic auto industry would soon be assaulted by formidable foreign competition. That same industry, moreover, had already decentralized its domestic production, inaugurating a long, slow process of deindustrialization in southeastern Michigan and especially Detroit. A population of chronically unemployed or under-employed workers was evident in the city even in 1963 and most of them were black. Detroit was said in the mid-1960s to be as riot-proof as an American city could possibly be. That did not prevent the outbreak in July 1967 of what was, until Los Angeles exploded in 1992, the deadliest urban riot of the American twentieth century.

Maraniss closes on an elegiac note. Spending months in Detroit in the course of his remarkably thorough research, he came to know first-hand its “wide swaths of emptiness and despair and foreclosed homes.” But isn’t Detroit “coming back,” as my Washington, D.C., neighbors frequently assure me? Maraniss provides a clear-eyed response. There are indeed pockets of life and hope in a number of Detroit neighborhoods and a new population—still relatively small—of youthful artists and entrepreneurs. But the extent of the city’s devastation and its still-large population of people living on the margins pose formidable obstacles to a genuine revival. “Will the Detroit recovery, when and if it comes, include people of these lost and forgotten quarters?” Maraniss asks. “Can it be called a recovery if they are left behind?”