From the March 1996 Issue
By Patrick Jordan 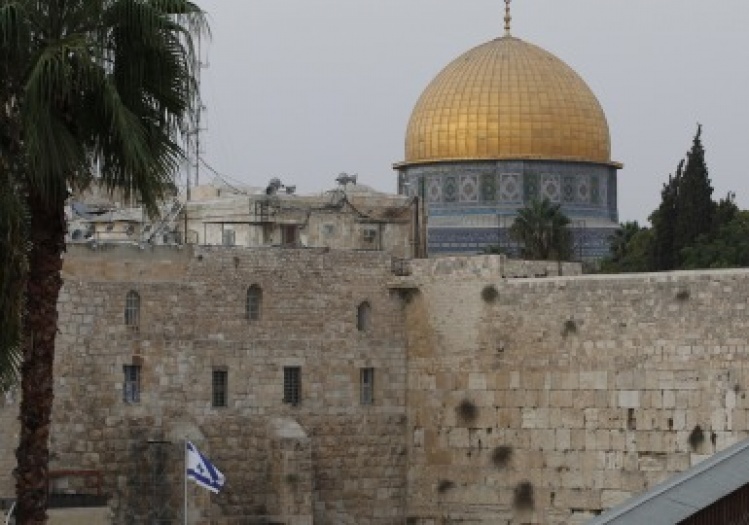 I went up to Jerusalem in January as a journalist, but quickly became a pilgrim. I write “up” because the psalms refer to the city that way. Once there, more than 2,300 feet above the Mediterranean and even further above the Dead Sea, you realize just how precise the psalms are.

I stayed at a hospice off Nablus Road near the famed École Biblique. This in turn was only two blocks from Jerusalem’s Old City, the ancient walled capital that is now an island encircled by modern East and West Jerusalem. Before the 1967 War, the area had been partitioned between Jordan and Israel.

I found myself drawn to the Old City each morning for the liturgy. Early mornings and late evenings are the best time to be there if you wish to pray at the holy places. Later in the day the numbers of visitors can be crushing, the sound of camera shutters as incessant as August cicadas.

I would set out with the sun coming up over the Mount of Olives, just east of the Old City. The light would gradually creep into the Kedron Valley, skip over the top of Absalom’s Tomb, then splash against the white stone walls of the Temple Mount, turning them golden. It was during those fresh morning walks that I realized why Jesus, even when pursued by the authorities, couldn’t resist going up to the city. He wept over it, and would today: Jerusalem the holy, riven by ongoing explosions and divisions—personal, tribal, religious, political.

In the January air, tracing the circumference of the Old City walls, approaching the El-Aqsa Mosque, walking the Via Dolorosa, or donning a paper yarmulke to pray at the Wailing Wall, this trip became more than a trip. No wonder the pope wants to go to Jerusalem to mark the millennium: Jerusalem puts everything in perspective.

For me, a Latin-Rite Catholic, seeing Rome for the first time from the East meant observing Catholicism from the vantage point of the mother church of Christianity, and doing it in the company of ancient sister churches—Orthodox, Coptic, Armenian, Syrian, Ethiopian, Latin Rite Palestinian—the living churches of the Holy Land. Suddenly the words catholic and oikumene had a deeper resonance. Yes, the bishop of Rome ought to be allowed to visit Jerusalem; he ought to linger there: getting to know its hills, its light, the air that makes you breathe differently. He should experience ordinary, everyday life: the Palestinian women arriving from Bethlehem before daybreak, carrying huge burlap sacks of freshly grown herbs and vegetables on their heads; Jewish families streaming through the Jewish Quarter to the Wailing Wall; Arab men in the courtyard of the Haram el-Sharif, washing their feet in preparation for prayer; the aroma, narrow walkways, and frenzied bustle of the Souk on the first night of Ramadan, with fathers vying to buy steaming piles of freshly made flat-bread to carry home to their waiting families.

The pilgrim’s memory I am bound to carry to the grave is of an early morning Eucharist at the Holy Sepulchre. I was up before dawn, brushing my teeth, when the electricity went out in East Jerusalem. Total darkness for miles. Hurriedly finishing dressing, I made my way into the void, descending through the grand Damascus Gate into the Old City. Although I had visited the Church of the Holy Sepulchre before, I had never been forced to find it in the dark. At points, the narrow streets of the Old City become tunnels. When that happened, all I could do was take one hesitant step at a time, the passageways swirling in blackness, my inner maps totally dissolved. Occasionally, I would cross the path of a stranger and nearly freeze in fear. Finally, in the distance, I saw a faint outline, the minaret of the El-Omariyeh Mosque, and I knew I was home: For the mosque stands adjacent to the Holy Sepulchre. The holy place of another faith had led me to that of my own.

The basilica of the Holy Sepulchre dates back to Constantine. It remained in darkness that morning, except for the occasional flicker of a candle and the small flames of hanging, oil—lit lamps. The actual sepulchre is a small, highly ornamented mausoleum, situated beneath the dome of the larger church. This shrine is under the jurisdiction of the Orthodox, but at specified hours the other rites celebrate their liturgies there. Peering into the archway of the sepulchre, I saw a white-clad Abyssinian monk praying in the small antechamber to the tomb. He wore a white cap and bright red woolen mittens and stockings; his breath heaved grey clouds into the cold morning air. Facing the tomb, he rocked up and down on a prayer rug, his head bowing to the floor. I entered the antechamber, then ducked down and entered the tomb itself. Roughly three people can kneel there at one time. An old woman was there, praying beneath a beautiful icon of the Madonna. Next to her and above a slab in the crypt—the slab—was a second icon of the Risen Lord, encased in elaborate silver plate. Initially, I didn’t like it. It wasn’t della Francesca’s monumental Christ stepping out of the tomb. But I soon came to realize that it was the most beautiful representation of the Resurrection I had ever seen. It seemed to capture the utter novelty of a man rising from the dead, both the gaunt realism and the mystery of it. Praying there, I also became conscious of a gentle fragrance, a mixture of the oil from the lamps, the incense of centuries, and a small bouquet of fresh flowers on the altar above the slab, beneath the icon.

Yet it was not the extraordinary beauty of the place—its Eastern sense—that created a feeling of both tranquility and exaltation in me. It was the presence I felt of those living witnesses of Christ’s life I have known. Some were just met in Jerusalem, others were dead. But there were the many others living: those who care for the poor and the dying in New York, a priest on Rikers Island, a woman who works with victims of AIDS, another who has given her life to peace­ making, and yet another who works with refugees in Sudan. There were my family, fellow workers, and members of our parish. It is through them I know the living Christ. It was they who had prepared me for this place.

I backed out of the crypt, shaken. The Abyssinian monk was still in the antechamber. Now he was prostrate on the ground, his whole body rolling gently back and forth in prayer. I had seen Jews rocking at the Wailing Wall and Muslims bowing in worship outside the Dome of the Rock, but I hadn’t yet seen Christians in Jerusalem in such expressive prayer. Perhaps I had been prepared by these others, but I did not find the monk’s manner off-putting or foreign. Rather, it seemed graceful, fitting.

The week I spent in Jerusalem allowed me to hear Mass in six different languages. But that particular morning the Mass was sung in Latin. The great organ accompanied the Franciscans’ voices and filled the cupola. We sang Gregorian Missa IX and—a minor miracle—I remembered not only the music but the Latin responses, and even understood some of the readings—David in Jerusalem; the cost of discipleship. The celebrant’s breath billowed as he chanted, like the incense rising from the censer of the young Palestinian server beside him. And there was a connecting thread in it all: the tomb, the ancient language, the proclamation of the good news, the future in the young boy.

The lights came back on. Jerusalem began another day.