'Now and Then I Feel It's Working' 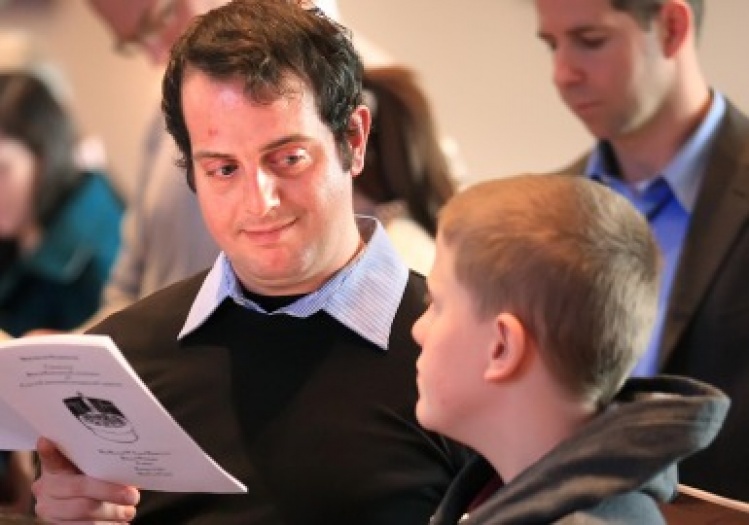 Several years ago, in an effort to find some spiritual fellowship, I decided to join our parish men’s group. Then in my early thirties, I was generally the youngest man at the meetings, often by two or three decades. I suppose it is a sign of the times that, now in my mid-forties, I am still the youngest man at our meetings.

As I grew to know these men, I discovered that many of them shared a common pain. Despite their best efforts, their children were not practicing Catholics. Some of their children had married in the church or had their own children baptized, but no longer attended Mass regularly. Others had not done even that much.

In those early months of participation, I was warmly welcomed but also treated as a kind of curiosity. Here was someone the same age as their children (or, in some cases, grandchildren) who attended Mass, was active in the parish, and, to all outward appearances, was a “serious” Catholic. What magical secret to passing on the faith had my parents discovered?

I had no answer because, in truth, my embrace of Christ and his church is only tangentially related to the way I was raised. Yes, we were Catholic. But we were Catholics of a decidedly ambivalent sort. My mother was raised in a large, poor family of Irish descent and, like many who have sprung from those roots, her relationship to her childhood faith is complicated. She has not attended Mass regularly since leaving home in her early twenties. My father, of “lace-curtain Irish” extraction, was raised by an extremely pious mother and dutifully married in the church and had his children baptized. We did not, however, attend Mass as children. My grandmother, apparently troubled that her grandchildren were growing up as pagans, continued to press my father on this point while surreptitiously sending me pamphlets on St. Thérèse of Lisieux and, on one occasion, a glow-in-the-dark rosary.

My father finally relented and began taking me and my sister to Mass around the time I turned ten. He chose a parish that was very “modern,” complete with the guitar music, large felt banners, and nonrepresentational stained glass that were popular at that time. Because of the late start to my religious education, I received First Communion and Confirmation in the same year.

I had a brief burst of piety around my Confirmation but started to drift away fairly quickly after that. I had no friends at the parish and no connection to it other than Sunday Mass. These were the early years of the Reagan administration and I found myself in profound disagreement with the “Christian” leaders who supported the president’s militarism and scapegoating of the poor. I was too disconnected from my own church to know that the U.S. Catholic bishops often had different views on those questions.

I try the reader’s patience with these details of my life story only to suggest this: If you had wanted to write a book about how not to raise your children Catholic, my parents (cheerfully, in my mother’s case) could have served as models. Yet here I am, my faith as much a mystery to me as it is to the rest of my family, none of whom are practicing Catholics anymore. Let it suffice to say that, in the end, my “reversion” was not a decision so much as a surrender to a power that simply overwhelmed me with its passionate desire for my return.

Every now and then I feel that it’s working. One of our family traditions during the last days of Advent is to recite the Magnificat (Luke 1:46–55) together. When my children come to the lines that read, “He has cast down the mighty from their thrones and has lifted up the lowly; he has filed the hungry with good things and the rich he has sent away empty,” you would think that they were narrating the climactic victory of the rebels over the Death Star in Star Wars. What better way to anticipate the coming of him who “gives light to those who dwell in darkness and the shadow of death”?

Most of the time, though, I feel that I am failing. I am writing these words shortly after yet another argument with my precocious twelve-year-old daughter about why she has to come to Mass with us, an argument that usually ends with me frustrated and her in tears. She claims that she is an atheist and hates going to Mass. Of course, she says she hates going to Mass in the same tone that she uses to say she hates showers or cleaning her room. My fourteen-year-old son is not particularly passionate on these questions, but has made clear that he has no intention of going to Mass when he is no longer under our supervision.

No doubt many readers will think I am being unduly pessimistic. This sort of adolescent rebellion is very common, even healthy, they will argue. Children who leave the church in their high-school and college years have often returned when they marry or have children.

Alas, that pattern seems to be breaking down. The fastest-growing religious community in the United States is those who claim no religious identity. These “nones” account for almost one-third of adults under thirty, and their number is growing. There was a time when the “thickness” of Catholic culture exerted a strong pull on those who had left. That culture, however, no longer has the power it once did, and efforts to restore its exterior trappings are too often tinged with a peculiarly Catholic form of fundamentalism.

I am not worried that my children will be bad people. They are too much like their dutiful parents for that. I am sure they will be gainfully employed, take jury service seriously, and yield to drivers attempting to merge ahead of them on the highway. Both of them are kind, and sensitive to injustice, and will no doubt volunteer some of their time to help the less fortunate as they pursue their chosen careers. In that way, their lives will mirror our own.

Shouldn’t that be enough? Perhaps it should. But if one believes, as I do, that the point of Christianity is not primarily to make people well behaved but rather to proclaim what Reinhold Niebuhr once called “the nature and destiny of man,” then it seems to lack something essential. I don’t think I would do my children any favors by pretending otherwise.

There is always a temptation as a parent to think that your children are clay that you are called to shape. The truth is that we are merely stewards of something precious that ultimately belongs to God. If he can call a prodigal like me back to him, he can certainly do the same for my children if he so chooses. In the end, faith is his gift to give, not mine.