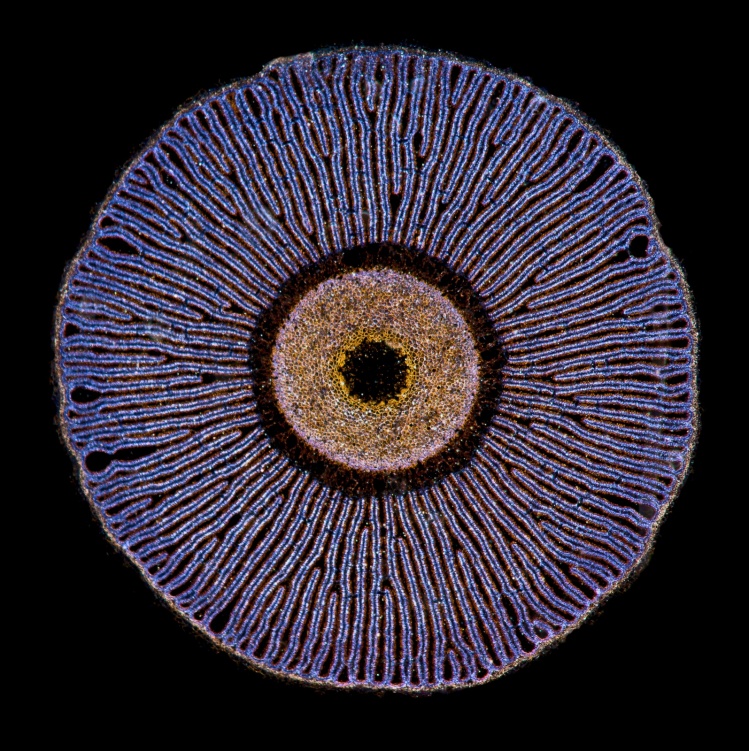 We live in a world being remade by neoliberalism in ways that go far beyond the exchange of goods and services. Convinced that the market is the best way to process dispersed human knowledge, purveyors of neoliberalism seek to apply its logic to more and more parts of our lives: competitive exchange becomes a master explanatory category that they claim reveals the underlying workings of systems as diverse as neurological networks and human society.

Catholic social thought, with its vision of the world as constituted by relationships of mutual obligation, shudders at this neoliberal reduction to competition between individuals. Where might we find evidence to evaluate these two opposing positions?

Ecology is a suggestive place to look. Ecological systems are constituted by astoundingly complex relationships—from the myriad nutrient flows of trophic networks (who eats and is eaten by whom) to the entanglements of symbiosis. For that reason, I was excited to read Robert Macfarlane’s interview with a young mycologist with the unforgettable name of Merlin Sheldrake on the topic of forest mycorrhizal fungal networks. Susan Simard’s groundbreaking research has shown that different species of trees share resources in the forest via fungal root connections; this science describes something enticingly similar to the common good. In the interview, Sheldrake expressed adamant opposition to what he termed “super-neoliberal capitalist” explanations of these complex relationships. Seeking to understand his thinking better, I consulted his scientific journal articles. But these did not engage questions of interpretation…and he did not respond to my emails.

Sheldrake’s recent book, Entangled Life: How Fungi Make Our Worlds, Change Our Minds & Shape Our Futures, provides a fuller, scientifically grounded, and poetically effusive account of his thought on these matters. While it covers many fascinating topics, from the parasitic ant-zombie fungus Ophiocordyceps to Psylocybe “magic” mushrooms (the two have more in common than one might like), the value of the book lies in Sheldrake’s wrestling with the difficulty of understanding such profoundly different organisms and their relationships with other species. That also indicates why Entangled Life should be of great interest to those, like me, drawn in by this research’s resonance with Catholic social thought. It’s not new or eccentric to notice such connections: Sheldrake reports the influence of early mycorrhizal research on J.R.R. Tolkien’s Lord of the Rings.

Often confused with plants, fungi occupy their own kingdom which is, in fact, more closely related to animals. The mushrooms we see are analogous to fruit, and the bulk of fungal life actually lies in the labyrinthine “hyphae”—threads that compose the “mycelium” that live beneath the soil or within the wood, bread, cheese, etc. being consumed.

In mycelium, the distinctiveness of fungi becomes apparent. They are surprisingly active. They transport fluids and resources in multiple directions and propagate electrical signals. These microscopic threads can create enormous pressure that allows them to burrow into rock and the hardest plastics. When hyphae combine to produce mushrooms, they can punch through asphalt and lift paving stones. They exhibit problem-solving behavior as they seek resources, avoid threats, and interact with plants and other fungi. The mechanisms of many of these abilities are unknown—they have no centralized structures analogous to brains.

Sheldrake chafes against the limits of scientific language, turning to metaphors to evoke the sheer difference of mycelium from plant or animal forms.
sharetweet

Sheldrake chafes against the limits of scientific language, turning to metaphors to evoke the sheer difference of mycelium from plant or animal forms. Mycelial networks are “processes not things.” Noting how fungi expand into the world to live and consume, he describes mycelium as bodies “without plan” and “appetite in bodily form.” As for their apparent cognitive abilities, “mycelium is a living, growing, opportunistic investigation—speculation in bodily form.” They are “streams of embodiment” as opposed to “streams of consciousness.”

Some of the book’s most challenging insights come in its discussion of symbiosis. Lichens—those easily overlooked organisms that grow on stone and branch—are, in fact, not a single species, but a mutualistic partnership of fungi, algae, and bacteria. Together, they are able to sing “metabolic songs” that enable them to live in environments where they could not survive alone. Studying them occasioned the creation of the concept of symbiosis itself, the politics of which “have always been fraught.” Lichen required a radical rethinking of evolution in the decades after Darwin and has provoked debates about competition and cooperation ever since.

Lichen also contest our understanding of individuals and species. From Aristotle through Darwin, we’ve imagined organisms as distinct natures possessing the powers to meet their needs in their environment. This conception held despite profound changes in the understandings of their origins. Lichen do not fit this definition. With lichen, the tree of life’s branches “intertwine and melt” into one another. “Lichens are places where an organism unravels into an ecosystem and where an ecosystem congeals into an organism.”

The insufficiency of thinking of lichens as species or individuals resonates with other, similar insights. Lynn Margulis’s widely accepted notion of endo-symbiosis argues that the fundamental structures of plant and animal cells—chloroplasts and mitochondria—are the result of a primordial fusion of species. It is hard to find simple boundaries for any organism: plant, fungi, or animal. Humans host trillions of bacterial partners that play essential roles in our flourishing. “Our bodies, like those of all other organisms, are dwelling places. Life is nested biomes all the way down.”

The “involution” of different species evident in lichen is also manifest in even more jarring examples of fungal parasitism. Once infected with the fungus Ophiocordyceps, zombified ants leave their colony, climb nearby plants, clamp their mandibles to the bottom of a leaf and die. The fungus then fruits from their head and rains spores down on the colony to seed the next generation. Who is acting here, the ant or the fungus?

One of the chemicals active in Ophiocordyceps is psilocybin—the hallucinogenic compound in magic mushrooms. Human partakers of psilocybin have profound experiences of loss of individuality and union with the universe. Sheldrake sees here another manifestation of fungi’s ability to blur boundaries and facilitate entanglement.

Sheldrake’s consideration of mycorrhizal networks builds upon this explanation of mycelium and lichen. There is strong evidence that this symbiosis between fungi and plants dates to the original colonization of land by primitive plants. Mycorrhizal fungi expand plant root networks a thousand fold, and they have the enzymatic abilities to free nutrients such as phosphorus from rock and provide them to their plant partners. The plants, in turn, provide the fungi with carbohydrates from photosynthesis. Simard’s research was revolutionary because it proved not only that trees share resources with fungi, but that fungi distribute these resources to other trees, even those of different species. (As it turns out, this is a special case. There are many instances of mycorrhizae functioning parasitically.)

This sharing of resources with other plants through fungal networks raises the issue of altruism—a classic problem for natural selection. Several solutions have been offered. Sheldrake argues that a “myco-centric perspective” provides the best solution. When fungi are viewed as actors rather than passive conduits, their interests in maintaining diverse partner species becomes apparent. Trees exchange with fungi, which then use the resources they receive to cultivate various other partner plants.

While that approach seems to address the altruism debate, Sheldrake is eager to pursue this myco-centric perspective further by interrogating the many metaphors used to describe these relationships—feudalism, socialism, market exchange, the “wood wide web,” and neural networks—and finds each to be limiting.

Inspired by Donna Haraway’s insight that “it matters which stories tell stories,” Sheldrake seeks to develop the narrative possibilities of fungal life: flipping anthropomorphism for “mycomorphism.” Sheldrake notes that hidden beneath our debates about anthropocentrism lies the less noticed, but equally profound, dominance of tree-like structures in thought. These appear in examples as diverse as family trees, biological classifications, academic disciplines, and file structures. What would happen if we thought in the logic of mycelia, imagining the relationship of things in terms of involution and entanglement rather than separation and distinction? What if we “let the polyphonic swarms of plants and fungi and bacteria that make up our homes and our worlds be themselves, and quite un-like anything else? What would that do to our minds?”

Here Sheldrake runs into the limits of what can currently be analyzed scientifically. Studies of mycorrhizal networks are limited in scope: measuring exchanges among a few plants in pots or test plots. Even larger field studies mapping interconnections are, in the words of a key investigator, “only a glimpse; a small window into a vast open system...a gross understatement of the actual connectivity of the forest.”

Previously, Sheldrake was much more critical of “super-neoliberal capitalist” interpretations of mycorrhizal networks. But in this book, resource exchange is a major focus, perhaps because of the analytic tools available. Lacking the ability to study these networks in their complexity, scientists trace single-factor connections and exchanges. As a result, this research is dominated by economic metaphors such as “trading strategies.”  The “shimmering unceasing turnover” of the larger system remains just as out of reach empirically as it does conceptually.

Thus, rather than finding a hoped-for fungal analogue of the common good, we can learn from science how very difficult it is to perceive and study emergent, collective realities such as common mycorrhizal networks. Sheldrake cites physicists who caution against assuming that we can understand complex systems by breaking them down and studying their component parts: “We rarely know how to put the pieces back together again.”

Sheldrake’s respect for these fungal entanglements can help us attend to other complexities that elude us. In the end, the crossover lesson may be epistemological humility and moral solicitude for the complex systems that sustain us—from ecosystems to the common good. That is challenge enough to neoliberal hegemony.

Vincent Miller is the Gudorf Chair in Catholic Theology and Culture at the University of Dayton. He is editor of The Theological and Ecological Vision of Laudato Si’: Everything is Connected (London: Bloomsbury, 2017). He is writing a theological response to neoliberalism entitled Homo Curans.