Is Cuba at a crossroads?
By Alejandro Anreus
Foreign Affairs
Latin America 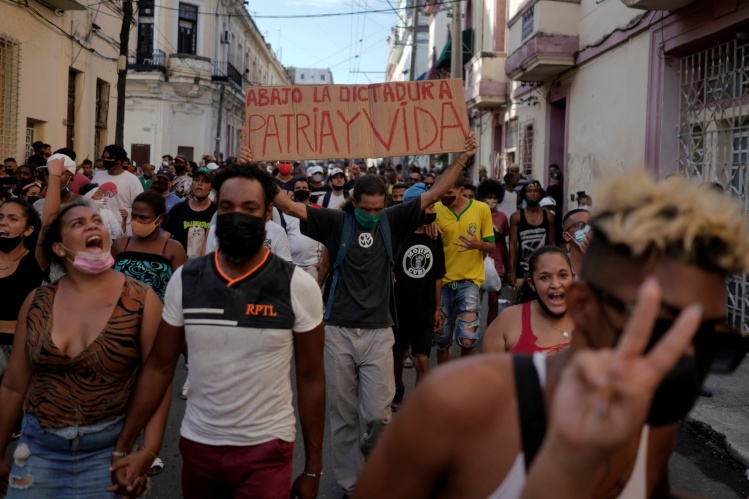 People in Havana shout slogans against the government during a protest, July 11, 2021 (CNS photo/Alexandre Meneghini, Reuters).

On Sunday July 11, thousands of Cubans took to the streets in various small towns and cities across the island. Chanting “Abajo la dictadura” and shouting for freedom, they also carried homemade cardboard signs demanding equitable and efficient access to COVID-19 vaccines, food, medicine, water, and electricity. Many signs read “No tenemos miedo” (we are not afraid).

The impromptu protests were picked up by and promoted through social media; there had been no such wide-scale demonstrations since the balseros (rafters) crisis of 1994. President Miguel Díaz-Canel immediately condemned them as creations of “the United States and the enemies of the revolution in Miami.” He did not stop with mere accusations; Díaz-Canel also urged his supporters to take to the streets and confront the nonviolent protesters. The head of the armed forces ordered the military police—in uniform and out—to respond with force. The protests have continued, on and off, and the government has arrested hundreds, if not thousands, of marchers all across Cuba (it has also released some in the last couple of days). But getting accurate numbers can be difficult, according to Amnesty International, since Cuba does not allow international human rights organizations to visit the island.

What are these island-wide protests about? It’s important that we do not misunderstand them. They are a culminating response to a variety of issues: the U.S. embargo that has been in place since 1962 (which, by the way, does not restrict the sale of food and medicine); the inhumane and reactionary restrictions imposed by the Trump administration; and, most significantly, the oppression by the failed Cuban state, which ceased to be “revolutionary” long ago. After sixty-two years, a younger generation, mostly citizens of color, are tired of being governed by a single party controlled by white, well-fed, middle-aged and older men. The Cuban people have the right to demand changes in their government and to organize new political parties and independent labor unions, the right of freedom of association and of a free and independent press.

The White House is missing an opportunity to perform true statesmanship.
sharetweet

Sadly, most of the reactions to the protests from outside of Cuba summon the exhausted ghosts of the Cold War. The “Let Cuba Live” statement published recently in the New York Times defends the current regime and blames “everything” on the U.S. embargo. Much of the Cuban American community accuses President Joe Biden of being “soft” on Cuba and wants even harsher restrictions imposed; some have even asked for an invasion of the island.

The Biden administration, meanwhile, is prisoner to the worst elements of neoliberal foreign policy and the influence of New Jersey Sen. Robert Menendez, who has been a staunch supporter of the U.S. embargo and disapproves of any engagement with Cuba. The White House is missing an opportunity to perform true statesmanship. President Biden should call on Congress to lift the U.S. embargo, while simultaneously reminding the world that the Cuban government has had an internal embargo on its people for more than sixty years. He should pick up where the Obama administration left off in its efforts to normalize relations, but with the rigorous negotiations that didn’t take place then. The State Department should commit to restoration of diplomatic ties; it should also commit to reopening a fully staffed embassy in Havana if investigations into apparent sonic attacks on personnel identify the culprit and the environment is deemed safe. It should also seek the advice and insights of thinkers—from liberal to democratic socialists in orientation—like historians Lillian Guerra and Ada Ferrer and political scientist Samuel Farber, to mention just three. (Regretfully, the Obama administration sought the advice of Cuban American businessmen, more interested in investments than the rights of the Cuban people.)

Amid the Manichean reactions to the Cuban protests, three statements have offered greater clarity and hope. A coalition of democratic socialists outside of Cuba and throughout the Western Hemisphere expressed their views in a July 12 editorial written by Dan La Botz and published on the website of the political magazine Viento Sur. Simultaneously demanding an end to both the U.S. embargo and the suppression of the Cuban people by its government, the piece stressed the importance of national sovereignty, no military intervention by the U.S., and the right of the Cuban people to freely express dissent and change their government. On July 13, the Conference of Cuban Bishops (no longer controlled by the late Cardinal Jaime Ortega) issued a statement supporting the right of the people to carry out nonviolent protests, adding, “A positive solution is not reached with impositions, nor by invoking confrontation, but when mutual listening is exercised, common agreements are sought and concrete and tangible steps are taken that contribute, with the help of all Cubans without exclusions, to build the homeland ‘with everyone and for the good of all.’ This is the country we want.”  The same day, the Cuban Conference of Catholic Religious Superiors (which includes the Jesuits, Franciscans, Dominicans, and others) issued a statement demanding the release of nearly three hundred arrested activists and “recognizing God’s voice in the people’s grievance.” It also urged the Díaz-Canel regime to allow Cubans to “freely express their discontent and to cease using violence to repudiate and suppress people who think differently and express their views in public.”

Alejandro Anreus is Professor of Art History and Latin American Studies at William Paterson University. His book Havana in the 1940s is forthcoming from University of California Press.