Civil War in Spain and the United States

By The Editors
From the Archives
Editorial
Spain 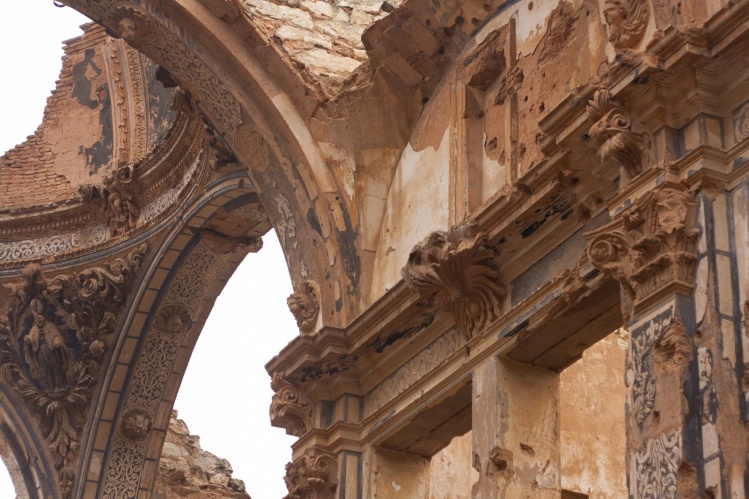 The church of San Agustín, Belchite, which was severely damaged in the Civil War (Wikimedia Commons)

[This editorial first appeared in the June 24, 1938 issue of Commonweal]

1. ​The Reason for This Statement

Most discussion of the Spanish question to date in the United States by supporters of both sides has been distinguished more for its heat than for any light cast upon the significance of events. Those directly responsible for the conduct of this magazine have believed that anything they said, however temperate and however qualified as their own opinion, might add rather to the heat than to the light. We have hoped for peace, and the opportunity to comment upon the better problems which peace proposes. But the war continues, and the manner of waging it, both in Spain and here in our own country, seems to change very little with the passage of time. As long as "total” war continues on the Spanish peninsula, it will continue to torment all of us, both in America and in Europe.

We do not for an instant pretend that what is said below is the only proper position for Catholics in the matter; we only affirm our belief, subject to correction, that our position is perfectly compatible with Catholic principles and that it is a view shared by many thousands of American Catholics.

2. The Spanish Problem in Spain

First of all we feel that some distinction must be made between the Spanish problem in Spain and the Spanish problem in the United States. In Spain there is an active civil war which is being fought by both sides in order to achieve, from the point of view of each political group, a better social order. The same struggle to achieve a better social order exists in every country but not in the form of an armed struggle, of a civil war. The general problem exists throughout the world, but the war in Spain relates to Spaniards acting in their immediate struggle and allegiance; outside Spain it relates to non-Spaniards observing a more remote armed struggle and engaged in the general problem in a different way.

We do not feel qualified to discuss the problem as it is in Spain in any detail because the information available is so generally characterized by propaganda that we do not have any sufficient knowledge of the whole situation. Two reports on a single event emanating from the opposing camps will be in complete contradiction to each other. The official principles of each side must be taken into account, but the actions of each side, when they can be known, speak louder than words.

A Spaniard, unless he is one of the few who are determined--and able--to make the "double refusal," seemingly must choose between two governments whose characters are mixed and are impossible to know from here with any comprehensiveness. One government, or part of it, has instigated, or at least permitted, the murder of priests, nuns and lay people; has utilized ruthless methods of accomplishing social and political and economic ends, and chosen, as far as it is possible to see, many objectives in all these fields that should be condemned. Its alliance with Russia implies some, if an unknown, degree of identification with the evils of the Soviet regime.

The second government, which gives the Church open support, yet, in its conduct of warfare, repeatedly and despite' protests from the Holy Father, destroys defenseless civilians, particularly by its air raids upon cities. Air raids made by one side cannot cancel out those made by the other. Many of its leaders give utterance to totalitarian views very similar to those which have been condemned by the Church in other countries. The system of government it utilizes and favors, so far as can be seen, contains elements that should be sharply rejected. Its alliance with the Fascist and Nazi nations implicates it to some, if an uncertain, extent in the evils of those regimes. Of course, both Spanish governments are in a state of war, which of necessity, under any regime, imposes certain limitations on human freedom. The choice is, to our way of thinking, tragic, however much analogous choices' have been necessary in the past and seem almost to be, from time to time, inevitable in man's political life.

3. The Problem in America

But there is a further obligation--that of learning what we can from the crucial struggle in Spain for use in the constant efforts we must make to achieve a better social order in our own country. There are two attitudes we can take in attempting to fulfill this obligation.

We can conceive the struggle for a better social order as inevitably taking in one's own country a pattern similar to that which it has taken in Spain. This usually involves whole-hearted partisanship for one side or the other in the Spanish war. It is the warm and emotional way of looking at the matter; it is the way which has been embraced by most American organs of opinion.

Or else we can try to learn from the Spanish war what to do in order to avoid the things on both sides of that conflict which seem incompatible with the achievement of a better society, and in order to carry on the developments necessary here without precipitating the carnage and hate engendered by war. This is, viewed superficially, an unappealing way of looking at the matter, and invites accusations of barren intellectualism, of indifference toward the truth. Yet we believe it is the charitable way, the rational and human way. It is not an attempt to achieve negative neutrality, which denies the existence of absolute right, but a positive impartiality: a search for the right, unblinded by that passionate partisanship which simplifies the problems that confront us to the dimensions of a slogan, and claims the right as the complete and exclusive possession of one warring party.

In this country there has been violent partisanship either for the Spanish Nationalists or for the Madrid- Barcelona government. We feel that violent American partisanship on either side with regard to the Spanish question is bad, not only because the facts are obscure, but chiefly because both sides include elements that no American wants imported into this country. Neither has begun to enforce or even propounded anything comparable to the bill of rights, which protects an individual from unbearable abuse of authority.

It is alleged by his supporters that Franco is not a fascist, but a restorer of order; by its supporters that Madrid is not opposed to Christianity, but only to "political Catholicism." Since both allegations emanate from partisan sources, they are subject to serious question. But the fact remains that one section of the American public has been convinced that Franco is a fascist; another section has equally been convinced that the Madrid government is atheist and communist. In the United States the practical effect of being unreservedly and uncritically pro-Nationalist is to seem to one's fellow Americans pro-fascist; of being pro-Government is to seem pro-communist and anti-religious. The result is to intensify and to make more effectively dangerous both genuine fascism and communism in the United States.

To be strongly partisan concerning the Spanish Civil War is indeed to aggravate a current intellectual disease: the conviction that we are going to be forced to choose between fascism and communism. This is a dangerous disease; sufferers from it are blinded by it to the truth that both systems are anti-Christian and secularist. (Unquestionably the greatest error is to think that the life of Christianity is bound up with the maintenance of any such temporal form of society.) The choice today is between secularism, the Hegelian state in any of its current forms, and the "personalist" Christian state, conceived as existing for the protection and assistance of its citizens. The issue is, of course, never clear in any given instance; but to transfer the issue from its proper ground--the distinction between the conception of man as free and the conception of man as existing only by favor of the state--to a totally improper ground is to further the cause of evil. The freedom that demands the constant vigilance and protection of every citizen is the freedom to pursue a person's spiritual, mental and social life without dictation by the exterior material force of a majority or a directing minority.

4. The Tactic against Totalitarian Secularism

We are quite frankly whole-hearted partisans of the personalist, Christian state. The seeds of both fascism and communism will germinate only in the soil of injustice, and then must be fertilized by a general public conviction that the leaders of the non-totalitarian state are deficient in moral strength and do not deserve the confidence of their people.

The problem of preserving or creating a form of state in which Christianity can truly flourish is therefore primarily a moral problem and one internal to the country concerned. In each instance both the government and all citizens must dedicate themselves to remedying present injustices, solving present social and economic problems, and, as much as is possible, preventing future injustice. Those entrusted with the governance of the state must strive in every way to make themselves worthy of public confidence and trust.

In more homely words, the best because the only effective way to fight anti-Christian totalitarianism is to make one's own country a thoroughly decent place to live in, to "restore all things in Christ."

It is for these reasons that we believe that the wisest, as also the most charitable and perhaps the most difficult, policy for Americans is to maintain that "positive impartiality," a sanity of judgment toward both sides in Spain, expressing a preference for specific ideas and actions when they are certainly known, but being an uncritical partisan of neither. Americans should cease labeling everything they may not like in America or elsewhere as either "fascist" or "communist"; they should try, instead, to study American problems not only in the hope of contributing to their reasonable and equitable solution but also in the belief that such a solution in America will constitute a part of the solution of international and world problems. Above all, we must avoid fostering the growth of totalitarianism and hatred of Christianity by avoiding all activities that even faintly encourage that spirit of hysterical opposition and human distrust which is the very life blood of both of those systems. Peace can come only where there is good-will, and when there is good-will, the road is open to peace

Tags
From the Archives
Editorial
Spain