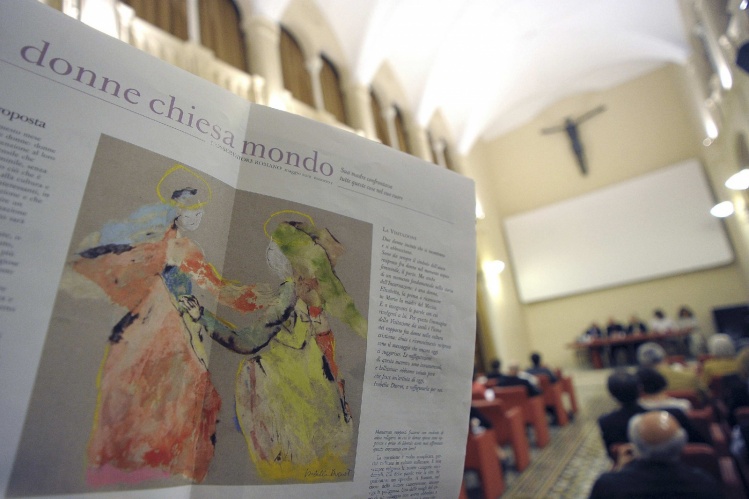 I’ve never been much enamored of the idea of a “women’s supplement” to L’Osservatore Romano. What does that say about the main publication? That it’s a men’s newspaper—and intends to stay that way?

In 2012, out of a desire to promote women, Pope Benedict XVI asked the newspaper’s then-editor Giovanni Maria Vian to make room for Lucetta Scaraffia, a historian and self-identified feminist, to write about women’s issues at L’Osservatore Romano. With Vian’s blessing, she went on to develop the monthly supplement, Donne Chiesa Mondo (Women Church World), which is now distributed in Italian, Spanish, and French (with English online only) and has a print circulation of about 12,000.

Scaraffia and her entire editorial board resigned yesterday in protest over being subjected to “male control” in the form of a new editor who came on board in December to replace Vian, another experienced journalist by the name of Andrea Monda. Tensions emerged as early as January when Monda had the temerity to come to one of Donne Chiesa Mondo’s editorial meetings and make some suggestions. At once, they threatened to quit.

Monda backed off and everyone stayed in place. But then he published some articles by and about women in the main paper, L’Osservatore Romano—articles Scaraffia had not previewed or endorsed. I read a few of them; they were well written and showed no markedly different approach to those found in Donne Chiesa Mondo. But that was perhaps why they were perceived as a threat.

The story was told with the dark interpretation that the Catholic Church’s sexism once again was at work in the incident.
sharetweet

Having thrown down the gauntlet before the new editor, Scaraffia and her board were being successfully challenged by women who were producing excellent journalism but not on their team; they were no longer the unique female presence at L’Osservatore Romano. The last straw came when Scaraffia and company discovered that the main publication was planning to sponsor a conference about women. At that point they “threw in the towel.”

When the news broke of the resignation of these seven women—heralded by an open letter to Pope Francis and an editorial in Donne Chiesa Mondo—of course the press was all over it. The story was told by all the major news outlets, with the dark interpretation that the Catholic Church’s sexism once again was at work in the incident. The patriarchal institution drives out the one brave feminist who breached the barricades! It was depicted as a fight of women against the all-male institution.

The women who Monda had engaged on his own to write about women’s issues were assumed to be puppets, while the only “independent” female entity was that of Scaraffia and her editorial board. Monda himself was reduced to a cipher in the incident, a “male control figure” rather than an individual with ideas and aspirations worth considering. He is not even a priest, but several publications warned ominously about “clerical control.”

The timing of the resignation also added to its explosive quality. Donne Chiesa Mondo had recently made a big splash by running a story about nuns who are abused by priests that was covered around the world. It was perhaps their greatest moment of public attention. It even led to an admission by Pope Francis that such abuse occurs and must be rooted out.

The airing of the scandal was a triumph, but the timing of the subsequent resignations then easily lent itself to a post hoc ergo propter hoc fallacy. The story of the resignations became not only the tale of the lone feminist in the Vatican refusing to knuckle under to men; it also became a story of the brave whistleblowers on the abuse of nuns being punished for telling the truth. In fact, the conflict was already simmering in January, well before the story about the nuns broke in early March.

The notion that women at the publication are now being marginalized seems to me quite out of place. They aren’t.
sharetweet

Through her seven years as editor of Donne Chiesa Mondo, Scaraffia has gained considerable recognition and influence. The magazine itself has also garnered praise. She and her hand-picked all-female editorial board have operated autonomously from the rest of the publication. Until last December she also served as an editorial consultant on L’Osservatore Romano. She has been a sought-after subject for interviews and widely quoted in the secular press.

Scaraffia’s views are not easily pigeon-holed. She is in favor of legalized abortion, but against artificial birth control. She opposes gay marriage and women’s ordination, but favors women cardinals. In one recent interview she railed against Pope Francis’s abuse summit for planning to issue guidelines for bishops to handle the abuse crisis. (What do they need guidelines for? They ought to know that abuse is wrong.) When Marie Collins resigned in protest from the Vatican commission to protect minors, Scaraffia, surprisingly, did not come to her defense. Instead, she penned an article denouncing the press for covering sex abuse in the church while neglecting it in civic institutions. Most of her tenure has occurred under Pope Francis, but she reports that she is more frequently in touch with Pope Emeritus Benedict.

So, what are we to make of these dramatic resignations? How should we read the conflict that precipitated them? The notion that women at the publication are now being marginalized seems to me quite out of place. They aren’t. There are more women than ever writing, and more women’s issues being written about than ever before. Funding for Donne Chiesa Mondo has not been cut, even as cuts have been made in the budget of the daily paper.

What seems to have happened is that Scaraffia ran up against a new general editor who did not regard her as the unique arbiter and reference point for all things pertaining to women. She preferred to resign rather than to cooperate with him within a larger framework of collegiality.

This is her right and privilege. To cast the question as a titanic struggle against “male control” and for all-female “independence,” however, seems to me wrong. There are independent-minded women on both sides of this story. The goal—or so I thought—was the robust inclusion of women in this venerable if rather stuffy Vatican newspaper. It seems to me that this goal is being pursued by the current editor. Ironically, the complaint about “male control” seems to be focused on protecting a separate fiefdom for women, rather than promoting women as equals across the board.

Which brings me back to the idea of a “women’s supplement.” Monda has said that it will continue, and this may work out fine. But I wonder if a segregated initiative is really such a good idea over the long run. I would rather see the concerns, expertise, and thoughtfulness that go into the supplement poured into the main publication, and have women’s issues established as an integral part of its usual reporting rather than sequestered in a separate publication. Is having a women’s issue “on the side” not just another way of saying that men need not pay attention?