‘The Shape of Water’
By Rand Richards Cooper
Movies 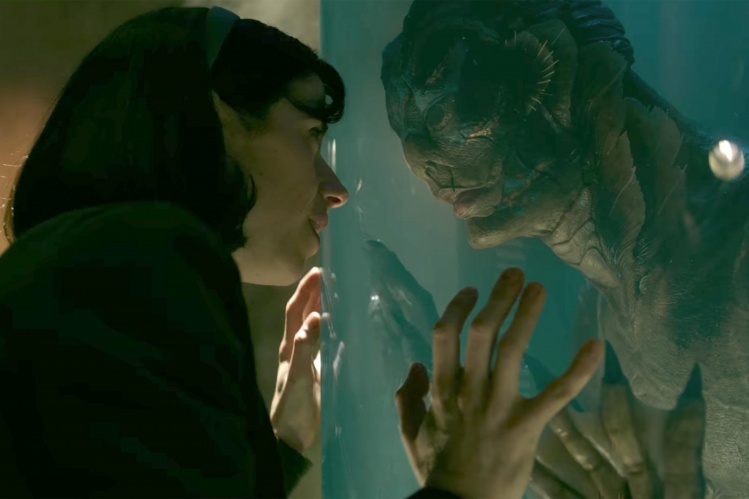 The Mexican director Guillermo del Toro is a one-of-a-kind talent among contemporary filmmakers. Skipping nimbly among genres—sci-fi, horror, fantasy, action, superhero—he’s less a shape-shifter than a master combiner, arrantly blending genre elements according to his own creative vision, and overcoming a viewer’s resistance by inundating him with strange and potent admixtures.

Del Toro’s early efforts include two films based on comic books, Blade II and Hellboy, and The Devil’s Backbone (2001), a gripping tale of the haunting of an orphanage in remote Spain during the Spanish Civil War. That film, in which worldly pain receives otherworldly retribution, served as a rehearsal for the director’s masterpiece, Pan’s Labyrinth (2006). Pan is the kind of film that defies summary. Set in Spain in 1944, it took up the harsh experiences of a young girl whose father has died and whose mother marries a brutal captain in Franco’s army, head of a unit tasked with annihilating a band of armed partisans hiding out near the unit’s remote forest outpost.

Pan’s Labyrinth juxtaposed a granular portrayal of the cruelest political reality with a sumptuous escape into fantasy, and filtered it through the imagination of childhood. Even as the girl, Ofelia, agonizes over the plight of her mother—deep in a difficult pregnancy and subject to a sadistic husband—she gains entry into a fairy-tale world, accessed via a mysterious, crumbling stone labyrinth in the forest. There she encounters a giant faun, who leads her through a series of challenges simultaneously designed to help her counter her wicked stepfather even as she fulfills the dictates of an ancient fable in which she plays a central role, and whose events unfold in a mysterious subterranean realm, the voiceover tells us, “where there are neither lies nor pain.”

Got that? The difficulty of summarizing the film speaks to the brilliant melding of opposites that del Toro pulled off: kindness and cruelty, beauty and ugliness, enchantment and terror, the surreal and the all-too-real. A remarkably audacious film, Pan’s Labyrinth is one of the most ambitious and moving cinematic experiences to come along in recent decades. Drenched in vivid hues that include great crimson splashes of blood, it was a kind of Alice in Wonderland meets The Killing Fields; when all was said and done—and sung, and bled—what it offered was catharsis of a high order.

Del Toro followed Pan’s Labyrinth with a Hellboy sequel, an excursion into a big-budget action film (Pacific Rim) and a gothic romance (Crimson Peak). And now he returns to magical realism with The Shape of Water. As in Pan’s Labyrinth, modes of fantasy are deployed to outline, and ultimately to combat, a dark politics of exploitation and fear, while invoking the same duality—the imagination that soars and the body that suffers.

The story takes place in 1962 Baltimore, where Elisa (Sally Hawkins) works as a cleaning lady at a top-secret government research facility. Traumatized by a childhood injury, Elisa is both a mute and a loner, a gentle soul whose only two friends are her co-worker, Zelda (Octavia Spencer), and her neighbor in her apartment building, Giles (the always excellent Richard Jenkins), a closeted gay man who works as a magazine illustrator in a Norman Rockwell–like mode. At the film’s outset, Elisa stumbles onto a government plot, in the form of a top-secret “asset” being kept chained in a water tank at the research center—an amphibious creature, part man, part fish, captured in the Amazon and brought back so that medical research conducted on it might disclose ways to optimize human survival in space (and keep up with the Soviets). The experiments are overseen by the program manager, Strickland (Michael Shannon), who is this film’s Captain Vidal, his fascistic bent expressed via an electric cattle prod he carries with him. Strickland is never happier than when using this handy tool of pain to taunt and terrorize the captive creature.

And so we proceed, with one suffering fish-man and a trio of marginalized heroes: a black woman; a mute survivor of unspecified childhood trauma; and a gay artist who spends his days portraying the mythic American family to which he can never hope to belong. Depicting these figures of marginalization buffeted by the callousness of Cold-War American life, del Toro sets up for us an uninsistent civic lesson on otherness and acceptance.

The Shape of Water has emerged as an early Oscar favorite, and it’s not hard to see why
sharetweet

Among other things—many other things. The Shape of Water is all at once a sci-fi monster movie, a cautionary political parable, a spy drama, a romantic tribute to old movies (Elisa’s apartment is above a grand old theater, the Orpheum), and, most of all, a love story. In conceiving the film, del Toro was guided by childhood memories of watching the 1954 cult classic Creature from the Black Lagoon, and iconic scenes of the creature diving with Julia Adams in its arms are replicated in similarly dreamy moments here, as del Toro brings the implicit romance of the earlier film to the surface, as it were, of his new one.

Like Pan’s Labyrinth, The Shape of Water relies on brilliant camera work to convey a texture of enchantment. Guillermo Navarro won the Oscar for cinematography in Pan’s Labyrinth, where he crafted a world of flickering motes and saturated golds and greens. And although del Toro has switched cameramen, the new film is similarly lavish to look at, its visual poetry facilitating the effortless shift between realism and fantasy. Dan Laustsen’s camera performs variations large and small on the leitmotif of water—from the stunning opening dream sequence, in which we see the contents of Elisa’s apartment floating lazily underwater, to the crescendoing rain that plays a role in the film’s plot, to the runaway faucet that turns a bathroom into a kind of super-aquarium, to a closeup pattern of raindrops on a bus window, which collect and combine in a whimsical dance that seems briefly to suggest sperm and egg. Frequently the film reminds us how fully the director has made surprise his hallmark; both its look and its plot are sufficiently novel that we never know where we’re about to go.

The Shape of Water has emerged as an early Oscar favorite, and it’s not hard to see why; the movie is clearly the work of a creative genius purveying such stuff as dreams—and nightmares—are made of. That said, to my mind it represents a falling-off from Pan’s Labyrinth. Take, for instance, the character of Strickland. Michael Shannon is a superb character actor who has gotten pigeonholed into playing borderline psychotic characters and/or control-freak authoritarians whose moralistic rigidity belies a predictable sadomasochism. In The Shape of Water, these tendencies are pushed into caricature, and the note of smirky exaggeration betrays something unsatisfying in the film’s conception. Strickland’s is a throwaway villainy; compared with the cold violence exuded by Captain Vidal in Pan’s Labyrinth, it approaches frivolity.

With its lush period look and a soundtrack of romantic ballads from the great American songbook, The Shape of Water takes the magical realism of Pan’s Labyrinth and overindulges the magic at the expense of the realism, upsetting what was a perfect balance of dreaminess and dread. Is it churlish to blame a movie for good intentions? By substituting positive human motives—the longing for love, the desire to do right—for the earlier film’s more primal drivers of suffering and fear, del Toro changes the underlying emotional calculus of his movie, and installs a fey sentimentality where before there was terror, grief, and redemption. The film launches the same astonishing flights of fancy. But when the stakes are lowered, the payoff shrinks.