‘The Bughouse’ by Daniel Swift
By Eve Tushnet
Books
Poetry 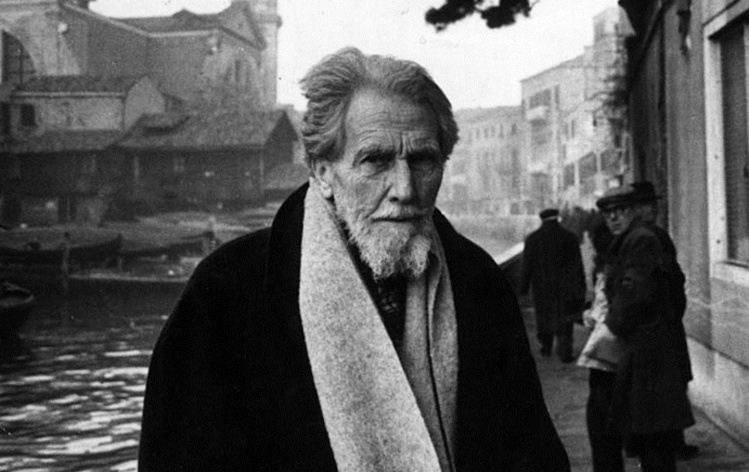 Ezra Pound standing on a pavement nearby a canal. Venice, 1963 (Walter Mori)

Daniel Swift runs his new book, The Bughouse: The Poetry, Politics, and Madness of Ezra Pound, like a shell game. Genres flash in front of your eyes: literary criticism, political journalism, biography, institutional history. But Pound himself is under none of the shells. The purpose of the game is to teach you that Pound, subjected to every kind of study and system, remains elusive—incoherent and undiagnosable.

The Bughouse centers on Pound’s twelve years at St. Elizabeths, the federal government’s mental hospital in Washington, D.C. During World War II, he had made propaganda broadcasts for the Italian fascists, which, since he was an American citizen, was an act of treason. An insanity plea saved him from facing the death penalty. He had to be diagnosable if he wanted to live, and so all his varied and conflicting diagnoses look a little bit like ploys.

Swift argues that terms like “fascist,” “madman,” “genius,” and “traitor” can’t capture Pound’s complexity. He also suggests that the possibility Pound faked mental illness to avoid conviction is at odds with the claim that he was a great poet. But don’t we all know by now that geniuses can also fake things? And do terrible things? And mentally ill people do still have political convictions, a few of which are as awful as the political convictions of the sane. How incoherent do your rants about “stockbrokers…‘the kikes’ and Tennyson” have to be before they count as a symptom?

Each chapter of Swift’s book views Pound through a different set of eyes. Fellow poets, doctors, contemporary Italian neo-fascists all try to name what Pound essentially is. The profusion of texts, interpretations, and diagnoses has the effect of modernist collage, mirroring the weird mix of voices, registers, and genres in Pound’s Cantos.

Swift’s prose can get purple (although he also has some nice lines: “Center Building is as geometric as a bird”), he makes strange guesses about others’ motives, and he hares off into weird cul-de-sacs, such as a section about an ancestor of Pound’s who made a wireless telegraph. But because Swift examines Pound through such a variety of lenses, the book offers at least a couple of chapters to fascinate any reader. There’s a scathing section on the genre of “Let me tell you how I, a true author, visited the great Pound on the psych ward”—or what Swift calls the “Tale of the Bughouse Visit.” Features of this genre, in works by William Carlos Williams, W. S. Merwin, and a host of lesser-known writers, include the journey from the outside world into the mental hospital; a description of the door separating the two worlds; and a description of some third person who plays the role of the real crazy person. Elizabeth Bishop’s nursery-rhyme poem “Visits to St. Elizabeths” deploys the genre markers of the door and the third person with complexity and gentleness. Her Pound is “tragic,” “talkative,” “honored”; “cranky,” “cruel,” “tedious.” At the poem’s delayed climax she names him as “poet,” and in its denouement he is “the wretched man / that lies in the house of Bedlam.” Unlike other examples of this genre, Bishop’s poem doesn’t show the speaker entering or leaving the ward. She is willing to stay—or to absent herself from her poem, and give her place as poet to another.

Swift finds a very different Pound when he visits CasaPound in Rome. The young men there call themselves “Ezra’s boys.” They’re squatters who hold conferences on Jack Kerouac, Japanese tattoos, and “themes dear to Pound, such as money, housing and the sovereignty of nations.” They remind Swift that Pound called himself “a fascist of the Left,” and they have developed a plan for a “Social Mortgage” to provide affordable housing to low-income families (as long as they’re Italian citizens). They praise vigilantism and clean bike paths. “I had also read about how in December 2011 a CasaPound supporter went on a shooting spree in a market in Florence and killed two Senegalese traders and wounded three more,” Swift writes. In his introduction he promises to explore “the connection between experimental art and extreme, often illiberal political sentiment,” but the anti-conservative elements and tastes of fascism don’t get much play here. Swift notes the patchwork character of fascism, its ideology of no ideology. He doesn’t quite see its godless mysticism.

St. Elizabeths was conceived as a place of healing for those damaged and made ill by modernity. Like modernist poetry, and like fascism, it was a secular response to modernity’s losses. The solution St. Elizabeths offered was nature (sweeping vistas, avenues of trees), work, and classification. The building itself began as an example of the “Kirkbride plan,” the imposing institutional design that features in countless haunted-asylum movies: an administrative core flanked by residential wings and surrounded by natural beauty. The calmest patients lived closest to the core, the most disturbed out at the edges. Classification offered the patients a place in the world, literally as well as figuratively.

The Bughouse is more about Pound-as-seen than about Pound’s poetry.
sharetweet

Swift explains that Pound’s case is only one example of the breakdown of St. Elizabeths’ systems. The Kirkbride plan had been set aside long before Pound’s arrival as the hospital struggled with overcrowding. New wards were added in separate cottages rather than ordered wings. Pound spent his first year in the ward for the criminally insane, two L-shaped buildings around a courtyard, kept behind a concrete wall. Nature and manual labor were sidelined—the hospital’s piggery closed in 1947, while Pound was in residence. The hospital was finally shedding patients, as new tranquilizers and anti-psychotics meant that more people were treated in their homes. Chemical imbalances replaced modern socioeconomic changes as the most common explanation for insanity. Swift was not able to read Pound’s full medical records due to patient-privacy law, but he found that Pound’s diagnoses varied wildly from “narcissistic personality type…with behavioral reaction” to “psychotic disorder…with neurotic reaction,” from “insane and mentally unfit for trial” to showing “no evidence of psychosis, neurosis or psychopathy…friendly, affable and cooperative.”

The Bughouse is more about Pound-as-seen than about Pound’s poetry. There is a poignant section on Pound’s translations of the Confucian collection, the Book of Odes: “It was Confucius who taught him that historians used to leave blank pages in the history books, and in the first year at St. Elizabeths, Pound stood in what might have been a bare white page of his personal history.... Now Pound resolved to fill those blanks with song.” There’s a lovely comparison between the Confucian odes and the blues, with “their sad certainty that trouble rhymes, repeats across time.” Swift finds passages where Pound incorporated the creatures and landscape of his hospital into his translations. An owl becomes a “Great Horned Owl,” an American bird; “insects” become “boll-weevils.” Swift finds Pound’s own shirt in the translations and the “Moat” around the violent ward, and he suggests that one passage transforms “hospital visiting hours [into]…an ancient ceremony.” There is almost a forgiveness here of Pound’s constrained circumstances.

In an obvious defense of his own kaleidoscope approach, Swift argues that “Pound’s poetry is marked—from early until late, this is his most powerful concern—by an anxious, repetitive worry at the distinction between history and its tellings. In the place of the past, his poems say, we have only documents, and our voices in the end are only versions. We may not, these poems whisper, ever know the past.” In the translations we get something closer to T. S. Eliot’s mandate in “Tradition and the Individual Talent,” to write the presence of the living past. Instead of calling attention to our distance from these millennia-old poems, Pound’s translations fit his own experiences into them, giving them a new life.

Eliot is the second great absence in The Bughouse, after Pound himself. Eliot visited Pound at St. Elizabeths but did not write his own tale of the Bughouse visit. Pound had helped shape Eliot’s most famous poem, cutting the The Waste Land down to the haunting, fragmentary work we have today. The Waste Land is like the Cantos in its muttering, mockingbird voice, its elegiac patchiness and attention to quotidian detail. But where Pound sprawled, Eliot structured. Scraps of Pound are glinting things: “Learn of the green world what can be thy place.” Or,

Bah! I have sung women in three cities,
But it is all the same;
And I will sing of the sun.

Eliot kept reaching for the order and harmony that Pound’s work deliberately evaded. (Even Pound’s playful misspellings suggest an intentional disruption of order.) In “Tradition” Eliot speaks of “the necessity that [the poet] shall conform, that he shall cohere.” Swift argues that conformity to (and coherence within) rational modernity is not possible. Pound is excellent evidence for that claim. Whether this means that poets have no duty to conform and cohere, or that they have a duty to something other than rational modernity is left as a question for the reader.