Misericordia in the Internet Age 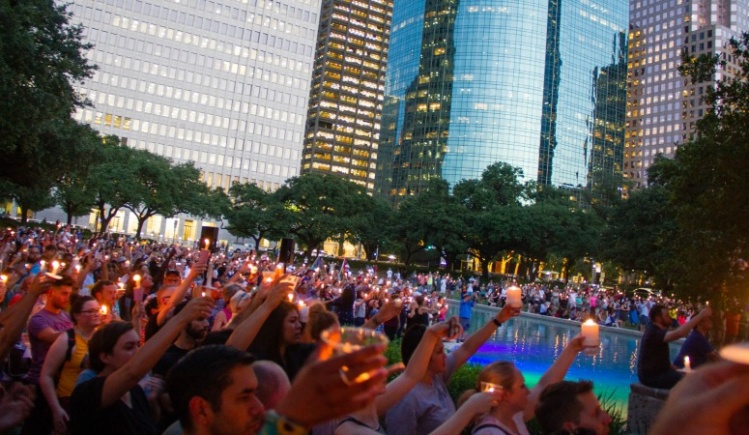 I discovered Orlando via Facebook. A friend from school—gay, Latino, Floridian—had posted a paragraph, raw and eloquent. Social media had donned its mourning clothes, my newsfeed strewn with posts and photos. It was the same Internet grief that followed Paris, Charleston, and San Bernardino, that is even now succeeding St. Paul, Baton Rouge, and Dallas. While the tweets and tirades can easily overwhelm, I still think they’re doing more good than harm: that grieving together online can serve as a contemporary reimagining of an ancient Christian discipline.

My friends and I, tangled in our early twenties, are learning to grieve. We’ve lost grandparents; we’ve seen illness bloat and enfeeble. We’ve even numbered peers among the dead, victims of depression and drink. In some ways, mourning the Orlando massacre feels familiar, a strange cousin to typical funerals. I am sad that people died and families are hurting. I am angry that a man filled other men with bullets.

Yet grieving Orlando, for the average Internet bystander, is different from mourning an intimate. The Orlando kind of grief—the Paris, or Charleston, or Dallas kind of grief—can seem uniquely twenty-first-century, mediated almost entirely by technology. Genocides and shootings and starvation are not new; it’s just now we know about them. And there are so many of them to know about. In my darker moments, it can seem unfair, our generational duty to bear the burdens of global debris in amplified detail.

Still, online media in the wake of tragedy could be doing something good. It may, if we allow it, be a modern means of activating an ancient genre: a particular subset of human sorrow.

In the writings of St. Thomas Aquinas, it’s called misericordia: often translated as pity, mercy, or compassion. The church doctor mentions it briefly in his Summa Theologica’s classification of four kinds of sorrow, each distinguished by its causes and outworkings. His list includes torpor—“sorrow depriving of speech”—and anxiety—“sorrow that weighs down.” There’s also envy: “another’s good, considered, however, as one’s own evil.”

What stands out to me is the idea of misericordia, rendered “pity” in the Dominican Fathers’ translation: “sorrow, for another’s evil, considered, however, as one’s own.” It’s possible to twist the instinct, Aquinas observes: compassion can be a cover-up for condescension. He notices the human tendency to exploit pains that aren’t initially ours. A gossip expresses sorrow over her friend’s fraying marriage—not to grieve it, but to draw her own more stable union into sharp relief.

Uncorrupted mercy, however, is possible: and it’s deeply Christian. Although Aquinas couches this fourth sorrow in close relationships—bearing the pangs of a brother’s illness, sensing the stresses of a neighbor’s money troubles—misericordia also, one Summa commentary claims, includes a “felt relationship of common humanity.” Here, we catch a glimpse of Christianity’s universalist bent, an ideal of compassion that supersedes one’s tribe or nation.

Aquinas didn’t invent misericordia; it dominates the Scriptures. Take the psalms, rife with destructive images: plundered vineyards, the bread of tears, itchy cloth, and smeared ashes. They’re written with particular sagas in mind: sackings and a temple in ruins. Inspired by explicit events, diffuse pity quickly takes hold. David’s Psalm 12 language could have been inspired by a typical Facebook feed: “Help, Lord, for no one is faithful anymore; those who are loyal have vanished from the human race.” He reports on the situation: poor in the ditches, needy rumbling with hunger. Bad things are happening; the world seems bleak. This is a grievous age, necessitating a song of lament. This is misericordia.

In one sense, the entire Bible is an exercise in wise men pitying the world, feeling the stings of that “felt relationship of common humanity.” The prophets produce litanies of cries, bemoaning corrupt kings and wayward peoples, sickness and sorrow writ large and ugly. Just look at this mess, they wail again and again. Isaiah personifies this: even the gates of Zion weep and mourn.

Christ, the wisest man there was, grieved for his own plight (dropping tears before the cross) and for those he loved (mourning Lazarus). He also ached for the precious New Jerusalem, longing to gather his chicks under wing even as we mired ourselves in quicksand. Even Jesus, master of the big picture, devoid of responsibility for our mutual suffering, got upset with the state of things. Matthew’s gospel especially notes this: “at the sight of the crowds, His heart was moved with pity for them…they were troubled and abandoned, like sheep without a shepherd.”

It turns out my grief in the wake of Orlando, inseparable from newfangled social media, is in fact not entirely modern. The psalmist, the prophets, Christ, Aquinas—all of them recognized that despondency over the state of the world is a vital sign of being human, essential as mourning a sibling or friend. In particular, grieving the world is nigh inevitable for the thinking Christian. It is the next step in comprehending metaphorical truths: a snake in a garden, the nakedness of punishment, locked gates of paradise, dammed streams of life. Responding to this reality—a world not operating according to God’s deepest intentions—means steeping oneself in misericordia.

Despite its distracting pitfalls, the internet may be doing well by us here. Caught in my own calendar, it can be difficult to remember starvation and shootings, persecution and prejudice. It’s easy to forget that my tidy world is cankered, and that I should be moaning for balms. “How long will it be? Relent!” cries Moses in Psalm 90. Thanks in part to Facebook and smartphones, the cries of my gay and Latino and black friends are laid bare in type. When I read them, their rawness shakes me awake.

There’s an obvious problem of action. When a friend suffers, we bake cookies and casseroles. When a grandparent dies, we call surviving relatives and offer tissues. Rituals of care become our salves. By contrast, no matter how much we feel when a hurricane or shooting blankets our newsfeeds, there’s only so much we can do. Sign this petition, donate money, dash off a prayer, deploy this or that hashtag. These actions, if we take them at all, are at risk of becoming one-offs, phantom grief that skirts the real thing.

It’s difficult to find Internet surrogates for authentic, sorrowful response. This shouldn’t make us lazy mourners, apt to shut off feelings with screens. Misericordia deserves offline cultivation. This may mean offering money or letters, blood or time. At the very least, it requires intimate ritual. Lengthy, regular prayers instead of quick, obligatory ones. Journaling the equivalents of psalms. Calling a friend to process. Calling another friend to remind her she’s loved. Discussing with family over dinner. Losing sleep. Being upset: for hours, days, weeks. Ensuring that the sorrows of the world stick to our stomachs.

Sustaining misericordia for tragedies experienced online is hard work. We are almost always far-removed. And it’s impossible to grieve completely: there are infinite things to be sad about. Still, it’s important that we try. Sustained grief hallows victims. Private motions prime for public change; we feel grief’s aftershocks when we vote, or hire, or make our schedules, or open our mouths. The psalmists and prophets didn’t stop keening; they refused to forget the plights of their people. They kept writing. They kept feeling. Their urgency—to sob, to warn, and to heal—gathers power with every sentence.

When we return to the Internet, ready to express our cultivated grief, it’s easy to forget misericordia altogether. In the weeks following Orlando, Facebook has been rife with arguments about how to channel our pity. Gay and straight friends lambast each other for not posting, or for posting too much, debating profile picture filters and the efficacy of offering prayers. Some argue for the primacy of victims, plastering faces and names on their walls. Others cry that gun control, or terrorism, or LGBTQ rights must be the first words on our lips, preceding even sobs. Grief morphs into bickering, disparate high roads are claimed. I become arrogant; I am the one that grieves best, whether in post or abstention.

The prophets and psalmists provide a counter model. They almost always identify themselves with the tragic failures of their nations—their grief is experiential, not observational. It is humble. “This day we are covered in shame,” notes Daniel in his famous prayer. The psalmists use communal pronouns: our secret sins are brought to light, teach us to number our days. There’s Aquinas again, considering sorrows (and their sad causes) as our own. Practicing misericordia means grieving Orlando as participants in the world that brought it about. It means mourning as threads in a web, not preachers on pedestals. It means being implicated; it means robing in sackcloth and rolling in ashes. If nothing else, it means pausing before we post.