Yesterday Pope Francis solemnly proclaimed the Jubilee Year celebrating Divine Mercy. It is to begin on December 8th, the Feast of the Immaculate Conception and the fiftieth anniversary of the close of the Second Vatican Council.

Here is his proclamation, "Vultus Misericordiae" ("The Face of Mercy"), which is theologically rich and richly deserves attentive lectio and meditatio. Like Evangelii Gaudium, the new document finds its evangelical and theological center in Christ. The very first sentence reads: "Jesus Christ is the face of the Father’s mercy."

One paragraph seems to me to provide particular insight into the Pope's vision:

If God limited himself to only justice, he would cease to be God, and would instead be like human beings who ask merely that the law be respected. But mere justice is not enough. Experience shows that an appeal to justice alone will result in its destruction. This is why God goes beyond justice with his mercy and forgiveness. Yet this does not mean that justice should be devalued or rendered superfluous. On the contrary: anyone who makes a mistake must pay the price. However, this is just the beginning of conversion, not its end, because one begins to feel the tenderness and mercy of God. God does not deny justice. He rather envelopes it and surpasses it with an even greater event in which we experience love as the foundation of true justice. We must pay close attention to what Saint Paul says if we want to avoid making the same mistake for which he reproaches the Jews of his time: For, “being ignorant of the righteousness that comes from God, and seeking to establish their own, they did not submit to God’s righteousness. For Christ is the end of the law, that everyone who has faith may be justified” (Rom 10:3-4). God’s justice is his mercy given to everyone as a grace that flows from the death and resurrection of Jesus Christ. Thus the Cross of Christ is God’s judgement on all of us and on the whole world, because through it he offers us the certitude of love and new life.

As if to give a concrete indication that mercy does not conceal but presumes the crucial importance of justice and truth, Francis commented today in Saint Peter's on the "Armenian genocide:"

Pope Francis on Sunday honored the 100th anniversary of the slaughter of Armenians by calling it "the first genocide of the 20th century" and urging the international community to recognize it as such, a politically explosive declaration that will certainly anger Turkey.

Francis, who has close ties to the Armenian community from his days in Argentina, defended his pronouncement by saying it was his duty to honor the memory of the innocent men, women, children, priests and bishops who were "senselessly" murdered by Ottoman Turks.

"Concealing or denying evil is like allowing a wound to keep bleeding without bandaging it," he said at the start of a Mass Sunday in the Armenian Catholic rite in St. Peter's Basilica honoring the centenary.

In a subsequent message directed to all Armenians, Francis called on all heads of state and international organizations to recognize the truth of what transpired and oppose such crimes "without ceding to ambiguity or compromise."

"If Today You Hear God's Voice" 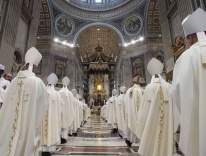