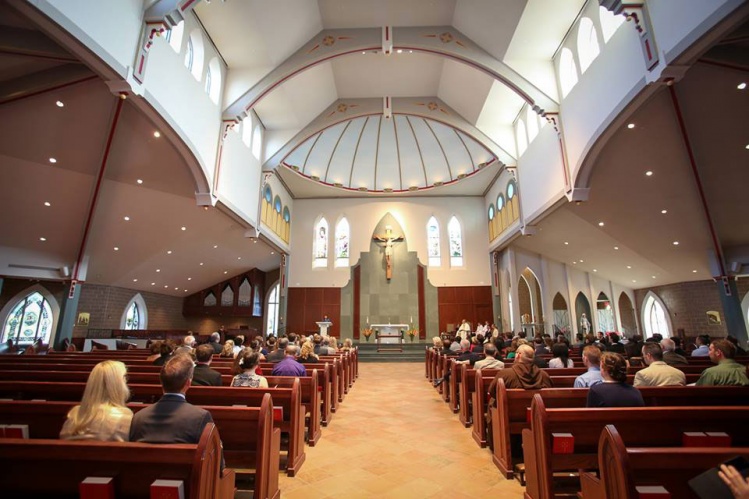 Nearly every Sunday and Holy Day throughout the year, our family worships and serves liturgically at the same suburban parish in the Chicago archdiocese. And so we considered doing something completely different for this secret-shopper-style exercise: going into the city and attending a Spanish-language Mass, or an African-American community, or a campus Mass or a young-adult-focused community. Maybe even a Latin Mass. But in the end we chose another suburban, middle-class parish: St. Michael the Archangel in Wheaton. We reasoned that suburban parishes are where a large plurality—perhaps a majority—of Chicago-area Catholic worshipers are likely to worship from weekend to weekend. As a snapshot of Sunday Mass around here, it didn’t seem a bad choice.

St. Michael’s parish history dates well back into the nineteenth century, but the faith community made news about fifteen years ago when an apparently troubled college student who’d attended the parish elementary school set fire to the church, rendering the building unusable. The parish community pulled together and managed to raise $13 million to build a replacement—an extremely impressive fund-raising achievement and surely the envy of many parishes around here, including our own, that have undertaken capital campaigns in recent years. So the look of this new building was one item of interest.

Another had to do with the parish’s location. It is less than a mile from the campus of Wheaton College, one of the nation’s premier seats of Evangelical higher learning (its most famous alumnus: Billy Graham). Would that proximity influence St. Michael’s liturgical approach in any way, either by borrowing from Evangelical preaching style and music, or alternatively by emphasizing Catholic identity?

We chose the 10:30 a.m. Mass, reasoning that it was likely to draw young families: late enough to roll teens out of bed, early enough that toddlers won’t be starving for lunch halfway through. Our own parish needs to appeal more to young families, so St. Michael’s ability to attract millennial parents and their children was something else we were curious about.

We arrived about ten minutes early to soak in the space and the ambience before Mass began. Not knowing our way around, we entered through a door that led into what seemed to be a small library area, then down a hall into the narthex. While it may not rise even to the level of venial sin, nobody greeted us. The parish website lists a ministry of hospitality, parenthetically adding that these are the ushers, but we managed to make the passage into the worship space without anyone actually saying hello. As cradle Catholics, our expectation of being greeted by ushers is not very high in any case.

The worship space itself is impressive, and may deserve to be called beautiful.
sharetweet

The worship space itself is impressive, and may deserve to be called beautiful. By no means is this one of those low-slung, merely functional Catholic churches that were built in the second half of the twentieth century across American suburbia. St. Michael’s is capacious and light-filled, with a high vaulted ceiling. The sanctuary is large and deep, with an altar and ambo worthy of the space. The tabernacle is against the marble-like back wall in the middle of the sanctuary, with an enormous crucifix hanging over it. The pews fan outward, with capacity for perhaps a thousand worshipers. There is also a Marian shrine and a statue of St. Michael, sword in hand and devil underfoot, that I think few children would be able to resist. Stained-glass windows in the sanctuary and along the walls admit a good deal of natural light.

Among the most notable features is the magnificent pipe organ. We chatted after Mass with the director of music and liturgy, Chris Orf, whose play proved that he is equal to the challenge of putting this Porsche of an instrument through its paces. He informed us that it was funded by a donor—an exceedingly generous gift. The organ is used for concerts and is featured on several commercial recordings. The ranks of pipes themselves, in the front near the music area and along the back wall, constitute a major element of the church’s decor.

And there were some notable features about the Mass itself. The presider, the parish’s pastor, was also the homilist. I really liked his homily. He has an understated and conversational style of preaching that allows the content, which was pretty strong on this particular morning, to do the work. The Gospel included the passage, “Come to me, all you who labor and are burdened, and I will give you rest.” His homily focused on the difficult burdens, of sin and relationship, that many of us carry, and urged us to trust Jesus to lighten them for us. An anecdote about a woman who hadn’t spoken with her sister for thirty years before she died, and the burden that this feud placed on her, really struck me.

Something else about this priest: he moves through the text of the ritual at a brisk clip. All my life, I’ve heard stories of priests who could sprint through the pre-Vatican II Mass in less than twenty minutes. This didn’t race by quite that quickly, but the entire liturgy, end to end, came in at about fifty minutes—pretty fast for a large, well-attended weekend Mass. One of the parishioners revealed afterward that his record is forty-three minutes.

By contrast, the woman who proclaimed the first and second readings didn’t rush. In fact, she did a very good job all around. One of the little “tests” I had set beforehand was the proclamation of the first reading. It begins on a high note of exhortation: “Rejoice heartily, O daughter Zion, shout for joy, O daughter Jerusalem!” After a lifetime of hearing such passages recited with all the passion of someone reading the phone book, I was pleased to hear the words proclaimed with the verve the passage calls for. Her enunciation was good and her preparation evident—all in all, an excellent example of how this volunteer ministry can be done.

The hymns and acclamation selections for this day were a blend of traditional and contemporary. The singing was led competently by a cantor whose well-trained voice was big enough to fill the large space. She, and we, were accompanied by the music director, who moved back and forth between the organ console and a fine grand piano. The tempos were pretty quick, I thought—but every church musician has strong views about tempo. Also, the organ was very loud during the congregational pieces. I understand that when one drives a Porsche, one wants to rev the engine, but in this case, the volume made it nearly impossible for us to hear the congregation’s singing. And, though this is perhaps a minor thing: in addition to the hymnal, worship aids were made available to us. But the worship aids didn’t provide notes and lyrics—they simply referred us to the hymnal number of each song. While that may be useful, it also involved killing some trees whose lives might have been spared by some combination of hymn boards and announcements.

The church was full and the crowd young—not a young-adult crowd, but a young-family crowd. There were definitely more young families at St. Michael’s than we’d be likely to see in our parish on a given Sunday morning. That might be attributable to the fact that St. Michael’s has a school (our parish doesn’t), or it could be an indication that this faith community’s pastoral approach is working. St. Michael’s also seems slightly more traditional than contemporary, what with its organ and hymns, its stained glass and statues, and its preaching on sin, to say nothing of its perpetual adoration chapel and the fact that reconciliation is offered nearly every day of the week—an astonishing commitment to that sacramental discipline. St. Michael’s does some things our parish doesn’t, and some things I wouldn’t want ours to do, but based on our visit, its approach is working for its community.

Jim Pauwels is a husband, father, and deacon. His day job is in corporate America. He lives, works, and ministers in Arlington Heights, Illinois.