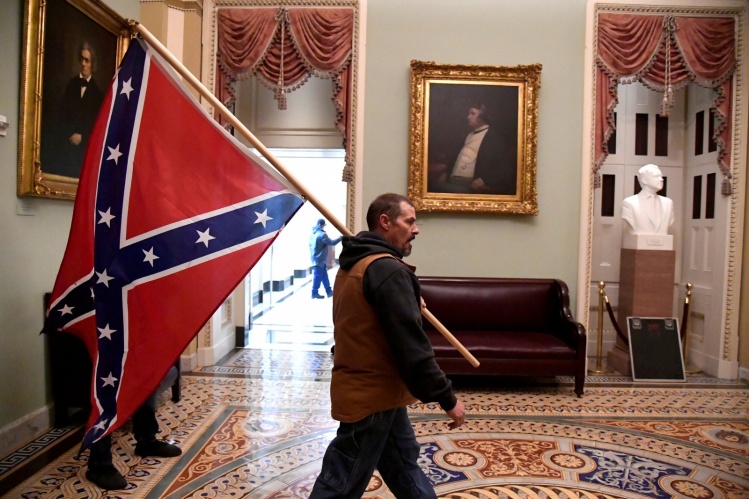 Not long ago, I wrote an article for Commonweal about the benefits and dangers of what I call rootedness. I define the word as a sense of belonging in the world based on an identification with a particular thing, whether that is a religious faith, a geographical community, a shared activity, or a philosophy. The benefit of being rooted is that we feel less alone. The danger is that when made to choose between our rootedness—which provides our sense of who we are—and the truth sitting right in front of us, many of us, perhaps most, find a way to ignore the truth.

The negative extremes of rootedness were on full and frightening display on January 6 during the storming of the U.S. Capitol, which left five people dead. What the rioters demonstrated nearly as well as the fact of their rootedness was its particular variety. I say “nearly” because while the idea that the rioters are actually rooted in, that is, white supremacy, was on full display too (witness the Confederate flag being paraded through the Capitol), it was not the ostensible reason for their collective criminal action. No, for that they took their cue from President Trump, who filled their heads with lies about the 2020 presidential election being “stolen” from them—lies that a clear-eyed look at the facts would refute—and then sent them, with all the justification they felt they needed, to wreak havoc on the world’s most important site of the business of democracy.

This is deeply ironic in several ways. The first, and perhaps the most obvious, has to do with the source of Trump’s appeal for many of his followers. It is not news that Trump has made people feel less constrained in airing their views—many of them noxious—about minority groups. Trump’s followers dismiss feminists, the LGBT community, and people of color as “grievance groups” who unfairly and endlessly demand politically correct speech and special treatment instead of accepting personal responsibility as the price of admission to a free society. Meanwhile, so the thinking goes, it’s open season on whites, whose very skin color has become a mark of doing something wrong. (“Gee,” says a Black man I know quite well, “I wonder how that feels.”) Encouraged by Trump, they refuse to take it anymore—thus becoming the latest and most dangerous grievance group in the country.

As in a game of rock-paper-scissors, rootedness wins out over truth.
sharetweet

The second irony is that they are right to feel that something has been stolen from them. But that something was not the 2020 election. Rather, it is the value of the thing in which they are rooted—whiteness—which of course is the real source of their complaint. There is a kind of inflation at work: whiteness doesn’t buy what it used to. Not so long ago, it was sure to constitute the winning bid for the White House. Eight years under President Obama and a woman of color as the new vice president have nullified that idea. Whites are projected to be a minority in America in 2045. Some whites fear that America won’t be their country anymore, and in a sense their fears are well founded. That is in itself not unfair, though it surely feels that way to them. Nor is it illegal, though they wish it were. But a stolen election—that is unfair, that is illegal. It is also, of course, not true. But rootedness has the power to make us believe what we want to believe. As in a game of rock-paper-scissors, rootedness wins out over truth.

Still another irony: in the midst of a pandemic that has claimed upwards of four hundred thousand lives nationally, footage of the siege shows very few masks among the participants—not literal masks, anyway. A twisted notion of American freedom led this crowd to reject, on principle, this minor inconvenience that has the power to save one’s own life and the lives of others. But they wore a different kind of mask, covering their real purpose with a righteous fury born from a lie that, no matter how many times it is repeated, will never become the truth. (To be sure, the mask slipped. A Black member of the Capitol Police reported that during the siege he was addressed by a racial slur more than a dozen times.)

The final irony also involves masks. Trump himself, who has refused to wear a mask, actually wore two. The mask of the stolen election covers the real cause, which is white nationalism—itself a mask. It is possible that Trump really believes, in some part of his mind, that the election was stolen; certainly he has given nods to the beliefs of white nationalists. But he is not rooted in either of these beliefs. Donald Trump is rooted, rather, in a desperate need to believe in the greatness of Donald Trump, and any truth that goes against that—say, a loss to Joe Biden in a free and fair election—must be fought to the point where he can convince himself it’s not really there. The tragedy is that he has made his delusion our era’s second deadly communicable disease.